I realized recently that I’ve been neglecting my Celeb Sightings section, so here are some highlights of 2009, mainly from the last few months of the year. They appear here in reverse order, from December down to January, where my all-time favorite one appears. And I wrote it before he was an actual celebrity! So, the kid from this top one can have hope that I bring him luck, too!

12/17/09 Up-and-comer Alexander Newton, new young star of the early 2010 release Iron Cross, Roy Scheider’s last film, speaking after the industry screening of it. Mark my words, this adorable teen-ager will be a celebrity really soon, and you heard it her first! (At the Q and A, I did something I’ve never done before: I raised my hand to tell him just how adorable he is! And when it concluded, I even went over to meet him and say what a great acting job he did. Both actions were way out of my comfort zone, believe me.)

12/9/09 Model Estella Warren, on line in front of me for the very first screening of Nine. You’d definitely recognize her face, if not her name. I did, from a goony ABC series she did this summer, The Superstars, where competing duos were comprised of one supposed celeb and one athlete. She seemed lovely on the show, as well as on the screening line! We chatted a lot during the long wait, and bonded over dislike of a creepy woman, who shall remain nameless. The guy Estella was with was adorable, too. Also there: Jesse Tyler Ferguson from the best new comedy of the year, Modern Family. FYI–none of us made it into the film. We turned-out to be the lucky ones! [Check out my Nine review that was posted on Christmas Eve.]

11/30/09  Kenny Ortega, giving some enlightening insight into Michael Jackson at the last industry screening of their amazing documentary, This Is It. It was great to hear a solid insider sing Michael’s praises as a person, as well as a performer. [Review in the Movies section.]

11/16/09  Dick Van Dyke, still as spry and agile as ever, coming onstage to thunderous applause at the end of the opening night performance of Mary Poppins at the Ahmanson Theatre. He was the original chimney sweep, Bert, in the Disney movie back in the day. [Review of the musical in the Theatre section.]

11/13/09 Not exactly a celeb anymore, but rather a former sitcom star, Michael Gross, the father from Family Ties, sat next to me on opening night of Baby, It’s You at the Pasadena Playhouse. I didn’t know who he was, but my guest did. I had noticed him because he kept singing along with the performers. While that was totally annoying to me, I was happy to see someone having such a great time, so I just went with it. [Review of the musical in the Theatre section.]

11/6/09  Derek Jeter and all the 2009 World Champion Yankees…because I was at the victory parade!!! Bad ankle and all. (I felt like Russell Ferguson of the future, [note: future–because it was months before he won] when he found out he won this season’s So You Think You Can Dance while nursing a freshly-sprained ankle, yet he jumped around the stage on pure adrenaline.) I still can’t believe that I left my house in Brooklyn, walked to the subway station, had no idea where the parade actually was, but figured I’d find it somehow, and stood in a packed crowd, to witness this wonderful piece of history! All the while wearing a heavy, uncomfortable, orthopedic boot, to boot! I hate going places myself, never take the subway, am totally claustrophobic, and am deathly afraid of crowds. But it was all worth it to see the happiness of the New York masses. And it was the most fun I’ve had all year! I loved seeing the joy of the players, and the crowd comments were priceless. As floats with personnel we didn’t know came by, (sponsors, crew, friends of the hierarchy, etc.) they chanted, “Who are you! Who are you!” One guy answered, “They’re the rich people! They’re the reason we have to sit in the bleachers!” And if the celebrants were on a high double-decker bus, the assemblage implored them to “Jump! Jump! Jump!” 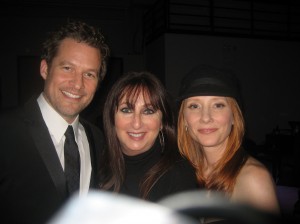 11/4/09   Isaac Mizrahi, James Tupper, Anne Heche, Kelly Rutherford, Nastia Lukin, and Alexis Dziena–all at one party!!! You can read the whole story soon on this site, (it’ll be posted by the end of the year), but it’s too long to tell here. It was in New York and celebrated the launch of Isaac’s handbag line. Each one of them couldn’t have been nicer. Nice celebrities–what a rare pleasure!

10/4/09 Halle Berry and her gorgeous boyfriend, Gabriel Aubry, coming around the pillar I was leaning on in front of the Mark Taper Forum. We were all there for opening night of Parade, a musical about an erroneous hanging of a Jewish man in the early 20th century. Thank goodness I had their beautiful faces to think of during the particularly hard-to-take moments of the show. [Review of the musical in the Theatre section.]

8/12/09 Blake Griffin, the newest LA Clipper and #1 draft choice, waiting to board the same plane I was taking back to Los Angeles from NY. We seemed to be just about the only two passengers who American Airlines hadn’t notified about the long delay! I couldn’t believe he was just wandering around by himself, so I popped over and said a quick hello. He told me he expected to see me at the first game of the season, and I said I’d try. But I guess he doesn’t know just what a busy gal-around-town I am! He’s lucky I was exhausted from my month in NY because otherwise, his wait would have seemed much longer, with me entertaining him!

2/6/09 Also spotted at the Minsky’s opening: Barry Manilow and David Hyde Pierce, though not together.

2/6/09  Maya Rudolph on her way into the opening night of Minsky’s at the Ahmanson Theatre, looking cute despite the rain. I’m assuming she was there to support former SNL castmate, Rachel Dratch, who was actually one of the highlights of the show. Wish they were both still on SNL; that show is in dire need of them, though, because Kristin Wiig can’t do it all herself, in the “funny females” category.

1/30/09  Frank Langella in his room at the Beverly Hills Hotel, right before the Oscars. No, I wasn’t in there with him–I spotted him as I passed in the hallway. I heard a familiar deep voice, with good speech, and looked to the open door, where he was in his bathroom, talking to a bell captain. It was interesting, though.

1/25/09  Adam Lambert enjoying the opening night of Pippin at the Mark Taper Forum…from second row center! Now that the world can finally experience his magnificent voice on American Idol this season, I guess he’ll always get the best seats. It’s about time–he’s so deserving. I’ve met him twice and hadn’t seen him in over a year, and he knew it was me without a moment’s hesitation! Talented, gorgeous, and darling! Love that boy!