2020 started-out a tad slow in the celebrity sightings arena, but it picked-up a bit by the end of January. For a little while. Then February was pretty slow again, but this group ended with a bang! A big one! 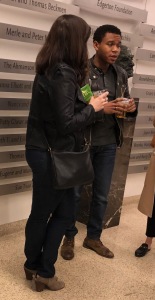 That’s the back of Allison Tolman, with Robert Bailey, Jr. Photo by Karen Salkin.

I’m aware that a few of these people are really in the category of “working actors,” as opposed to being true “celebrities,” but there are a few beauts in here, especially from the music business!

So let’s get to them already, so I can get cracking on my quest for the next batch of Celeb Sightings!

1/17/20 Allison Tolman and Robert Bailey, Jr., two stars of the TV series Emergence, (which I’m the one who watches,) at the Mark Taper Forum in downtown LA on opening night of What The Constitution Means To Me. They were there to support their cast-mate, Maria Dizzia, who was starring in the play. (Jesse Tyler Ferguson was there, as well, not for the actress but rather because he’s at that theatre for just about every opening night!) (You can read my review of that show, which does play around the country, here: itsnotaboutme.tv/news/theatre-what-the-constitution-means-to-me.)

1/21/20 Aubrey Anderson-Emmons, who plays the teen-age Lily on Modern Family, at Dodger Stadium for the opening night of Cirque du Soleil’s Volta. (The internet has her age as twelve, but I can’t imagine that girl is a day younger than fifteen! If she really is twelve, she should sign-up for the WNBA this very second!) (Here’s my review of Volta, which you can still see in SoCal and in other cities around the country: itsnotaboutme.tv/news/live-production-cirque-du-soleils-volta.) 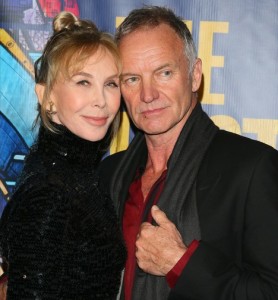 Trudie Styler and Sting. Look at her selfish hair style! Her last name should be taken away from her because of it!

1/22/20 Trudie Styler, getting settled in the audience for the opening night of The Last Ship, which her husband, Sting, was starring in and also wrote, at the Ahmanson Theatre. (I spied Olympic skater Michelle Kwan and Black-ish actor Laurence Fishburne there, as well. And Dancing With The Stars judge Carrie Anne Inaba sat a few rows behind me, too.) That Mrs. Sting did not know enough to not wear her hair piled on top of her head in a theatre, where she could be blocking the view of the people behind her, was shocking to me! That’s incredibly rude! (In case you’re curious, as all music lovers should be, here’s my review of that musical: itsnotaboutme.tv/news/theatre-the-last-ship.) 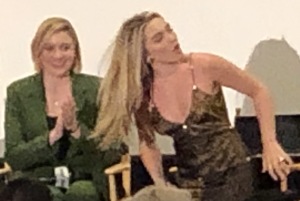 1/24/20 British actress Florence Pugh and director Greta Gerwig speaking after an industry screening of their waste-of-time (in my opinion) film, Little Women, in Culver City. (You can see my rant about that film in my YouTube video right here: www.youtube.com/watch?v=XDW-lyP0sj4&t=17s.) 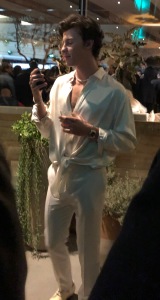 Shawn Mendes. (Did you catch his pearls?!) Photo by Karen Salkin. (The photo of the two of them together, taken by Denise Wilke, is at the top of this page.)

1/25/20  Shawn Mendes! This was my favorite sighting, by far, until it wound-up tying for that privilege exactly one month later. (You’ll have to read on to find-out who the other star is.  I’m actually making myself crazy trying to decide which one I loved more. But perhaps this one is the winner because…I got this photo with him!) It was at a pre-Grammys soiree in Hollywood, of course! (And, oh yeah, CeeLo Green was there, too.) (Here’s my story about that entire event: itsnotaboutme.tv/news/gifting-loungeparty-one-love-luxury-lounge-by-gbk-productions-primary-wave-music-party-honoring-the-2020-grammy-awards.) [Note: That’s Karen Salkin with Shawn Mendes at the top of this page.  Photo by Denise Wilke.]

1/26/20 Devin Bright, the riotously funny child from The Unicorn, at the most popular breakfast place in Burbank. Meeting him, and seeing his and his parents’ happy reaction when I told him how talented he is, cheered me up on that otherwise bleakest of days. (Check the date, if you don’t know to what event I’m referring.) 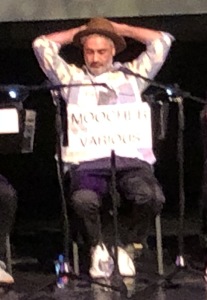 Taika Waititi! (The sign in front of him says his character’s name.) Photo by Karen Salkin.

2/12/20 Jon Lovitz, sitting in the waiting room at a Beverly Hills’ doctor’s office.

P 2/25/20 Recent Oscar-winner, (for Best Adapted Screenplay for Jojo Rabbit,) Taika Waititi, doing a play reading at the Wallis in Beverly Hills. I hope that you’ve figured-out that this is the one that’s tied with Shawn Mendes as my favorite Celeb Sighting this go-round. I love Taika. And his performance was just as special as I expected. I love a person who does not let me down!!! (In case you missed it earlier this week, here’s my review of that experience: itsnotaboutme.tv/news/theatre-breaking-away-and-other-special-one-night-only-programs-at-the-wallis-upcoming-and-past.)