Before we move any further into 2020, let’s finish-up my end-of-2019 Celeb Sightings. And then we’ll immediately get into all the interesting ones from these early couple of weeks of the new year. January is always such a busy month in this town, especially for events celebrating the many awards shows, and Screen Actors Guild Awards screenings (which I vote on today, actually.) 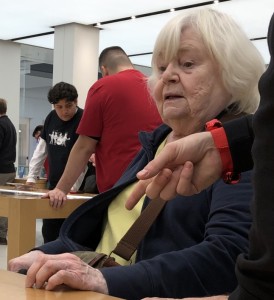 Some of these people I saw from afar, and some I had the pleasure of speaking with. It was a good blend of fun sightings, all the way around. So here they are:

12/19/19  Oscar nominee June Squibb (for 2013’s Nebraska) at the Apple store in Sherman Oaks. I have no idea why we two luddites were even in there, but I’m glad that I got to talk to her for a second; she was exactly as sweet as most of her characters. And she looked amazing for the nonagenarian that she is!!! 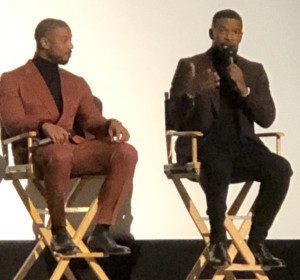 Michael B. Jordan and Jamie Foxx. Photo by Karen Salkin.

12/22/19  Jamie Foxx and Michael B. Jordan in West Hollywood speaking after an industry screening of their current important film, Just Mercy. I was never a fan of Jamie (as a person, not an actor,) but let me tell you—that man has confidence! His words were very honest and educational.

12/31/19  Justin Guarini, the very first American Idol runner-up, (and Mr. X’s favorite commercial character, as “Lil’ Sweet,”) with his young son, chatting-up the owner of a Bel-Air pharmacy, while rocking a new cute ‘do. (It’s sort-of buzzed on the sides and very curly on the top.) 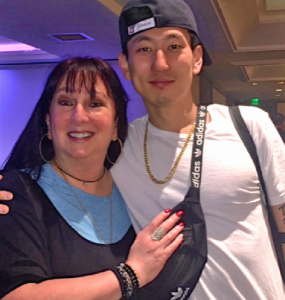 1/3/20  Single Parents’ “Miggy,” Jake Choi, (with whom I share my January 14th birthday!,) at the Secret Room Events gifting lounge in Century City, hanging with  The Terror’s Miki Ishikawa, (but definitely no couple alert there—trust me!,) and…me! He actually spent a lot of time with me, and was absolutely adorbs! To everybody. That was a pleasure to experience. [Note: That’s Jake and Miki in the pic at the top of this page. Photo by Karen Salkin.] 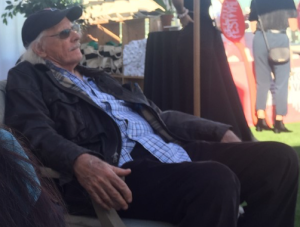 1/3/20  How To Get Away With Murder’s bad guy, Esai Morales, and multiple Oscar nominee Bruce Dern (who, coincidentally earned his second nod for Nebraska, the same film I mentioned June Squibb for at the top of this column!,) in West Hollywood at the GBK pre-Golden Globes gifting lounge. Bruce was chillaxing while Esai was mingling. 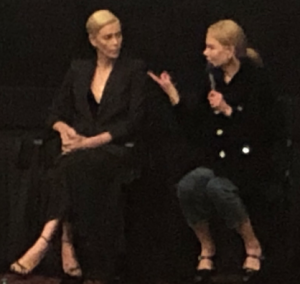 1/4/20 Charlize Theron and Nicole Kidman doing the Q-and-A after an industry screening of their Oscar-nominated film, Bombshell.

1/14/20 Director Quentin Tarantino speaking after the biggest industry screening of his recent major film, Once Upon A Time In Hollywood. And we were in Hollywood. (If you noticed the date–yes, that is correct—this is what I chose to do for…my birthday!) 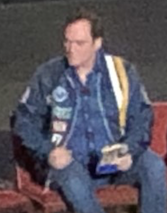 And now it’s on to my Celeb Sightings for the rest of the year. (And this is the beginning of the year, not the decade! If you missed my explanation of why 2020 is not the beginning of a new decade, which I featured in both of my recent New Year’s columns, here it is again: 1 through 10 is one decade, 11 through 20 is another decade, and 21 through 30 is another, and so on. So the end of this current decade is not until December 31, 2020. As my friend Barbara Burton wrote on Facebook, “I guess many people are unaware that we are just entering the last year of the current decade, which will end a year from today.” So I know that at least one other person gets it!)

With all the awards shows and parties coming-up in the next month or so, my life is sure to be rife with celebrities!

Speaking of celebrities, the SAG Awards are this Sunday. And, of course, I plan to live-tweet them. So if you’re not one of the thousands who already follow me on Twitter, this would be a good time to do so. @MajorCelebrity. I’ll see you there on Sunday!