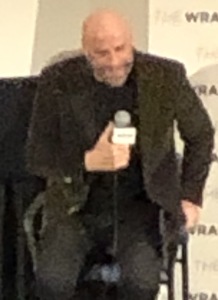 This is my final Celeb Sightings of 2019. Heck–it’s my last one of the entire decade!!! Wow; that’s actually mind-boggling.

I spent the last half of October and the first half of November in New York City, which you would think would have celebrities everywhere you turn. But let me tell you, the last few months of the year have been slim pickins, on both coasts.

But they are all interesting ones, and far from the usual suspects. As a matter of fact, I’ve seen only about half of them in person before, so there’s definitely that.

So, let’s get to them already! 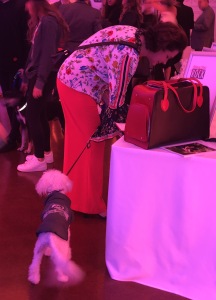 Sean Young (and her rescue dog.) Photo by Karen Salkin.

10/22/19  Sean Young, the formally stunning actress who is now talked about only as being crazy, sitting right next to me at the cocktail portion of the Rescue Dogs Rock NYC Gala, held at a venue on Park Avenue that’s so secretive, it does not even have a name! She looked okay enough, but she was one of the very few who brought a dog along. That behavior was actually okay this time because it was encouraged by this dog-adoption organization. I guess she finally found her purpose in life, so good for her. (You can read all about that gala here: itsnotaboutme.tv/news/charityevent-rescue-dogs-rock-nyc-gala.) 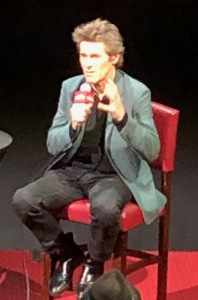 10/24/19  Willem Defoe in Midtown, speaking after a screening of the excellent-but-ignored movie, Motherless Brooklyn, in which he co-stars. He was a really fun and honest speaker, but I still wish I had chosen to see it at a screening with star, writer, director, and producer Ed Norton taking the floor. I love him!

10/24/19  Yes, you read that date correctly—I went right from the screening above directly over to this one! (But it was also in Midtown, so it worked-out very easily.) And I was rewarded with a panel discussion of Dolomite Is My Name with stars Eddie Murphy, Keegan Michael Key, and Titus Burgess, moderated by Spike Lee, who actually had nothing to do with this film; he’s just loving life since he won his Oscar last year! [Note: That’s the guys in the big pic at the top of this page. Photo by Karen Salkin.] 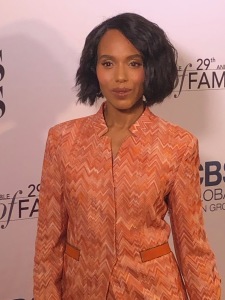 10/29/19 Kerry Washington right up-close at the cocktail party for the Broadcasting & Cable Hall of Fame Gala at the Ziegfeld Ballroom in Midtown. My friend (and photog) Sheila got to chat with her for awhile. I have no idea what she said to Kerry, but Kerry was smiling and laughing the entire time! (You can read about that whole event right here: itsnotaboutme.tv/news/new-yorktelevisionevent-broadcasting-cable-hall-of-fame-2019-gala.)

Then back to LA:

11/11/19 Dancing With The Stars alum Mark Ballas, hip-hop violinist Lindsey Stirling, and Crazy Ex-Girlfriend’s Rachel Bloom (and so many more) at the World Choreography Awards in Beverly Hills. Not only did Mark and Rachel take the stage, (him to perform and accept an award, her to present,) but Mark and Lindsey hung-out in the lobby with everyone, proving once again that the dance world denizens are the most fun! (All the wonderful deets of that magical evening are right here: itsnotaboutme.tv/news/danceawards-show-world-choreography-awards-2019.)

11/14/19 Daniel Craig, Chris Evans, Jamie Lee Curtis, Don Johnson, and Michael Shannon (what a group, eh?,) speaking after the premiere of their fun new film, Knives Out, in Westwood. It was a very entertaining discussion!

The cast of Knives Out. (If you really need to know who’s who, just leave a comment at the bottom of this page.) Photo by Karen Salkin.

Ryan Tedder (and his wrong attire for the occasion.) Photo by Karen Salkin.

11/16/19 One Republic’s Ryan Tedder showing-up just like a normal person at Our House’s holiday gala in Beverly Hills. We chatted for a bit. He was far from the warmest person I’ve ever met, (and was even further from rocking the appropriate attire for the occasion,) but I was still glad to make his acquaintance. (This is how that entire evening went: itsnotaboutme.tv/news/party-house-of-hope-gala.)

12/2/19  John Travolta speaking after a screening of his God-awful new semi-horror film, The Fanatic, in West LA. He was personable, but still weird. My advice is to definitely stay away from this nightmare of a movie! [Note: That’s John in the very first picture in this column. Photo by Karen Salkin.] 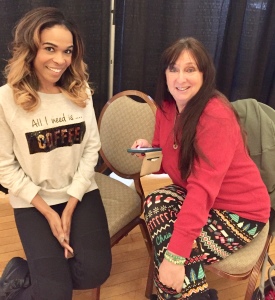 12/10/19 Destiny’s Child’s Michelle Williams in Pasadena for Press Day for the Christmas Panto, A Snow White Christmas, (which actually opens tonight! So do not wait for my review on Monday to see it—I already know it will be excellent!) We chatted for awhile, and since it was less than a week since she had been unmasked on The Masked Singer, we discussed that show. And she confirmed that everything on there is truly hush-hush. She told me that none of the singers even see each other! And since I admired her talent on there so much, I’m looking forward to seeing her play The Wicked Queen in the Panto tonight! I’m just wondering if the singer who was the next one to be eliminated on that TV show, NBA player Victor Oladipo, (who I’m probably the only one who knew who he was the whole time,) will show-up at the Pasadena Civic Auditorium to support her! I’m bringing a basketball, just in case.