As always, I see many celebrities on a daily (and nightly) basis. Many of them I tell you about as the events unfold, like at Gifting Suites and opening nights. Here are the highlights of some of those in January, and several at other places, my favorite being the first one of the year, that is, of course at the bottom, since I always do them with most recent listed at the top.

1/31/11 Occasional judge and choreographer of my all-time favorite number on So You Think You Can Dance, (danced by Melissa and Ade to Maxwell’s A Woman’s Work) Tyce Diorio, having lunch near me at Hollywood’s Magnolia, the popularity of which I just don’t get, btw. 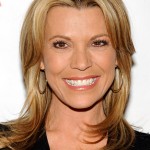 1/28/11 Vanna White having dinner at Shu at the Beverly Glen Center with two teen-agers who I’m assuming are her children. She looked great!

1/28/11 Rob Reiner on the sidewalk of Beverly Hills’ mini restaurant row, Brighton Way. I saw him twice, two hours apart, so he probably went to one of the eateries for awhile, though he looked confused on both ends of the time span. Maybe he’s not used to seeing that much plastic surgery in one block, especially on the patio at Villa Blanca, where my friend and I were having lunch. It was kind-of mind-boggling. 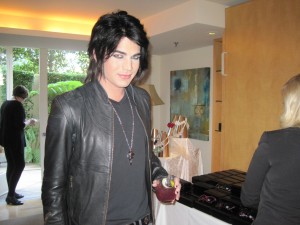 Photo by Karen Salkin for www.ItsNotAboutMe.TV

You know what a major fan of his I’ve been since way before he was even famous. We ran into each other at Beverly Hills’ L’Ermitage Hotel at a Golden Globes suite and he was adorable and charming as ever. I realized afterwards that I hadn’t seen him since he’s had all his success, and he greeted me as warmly as ever and gave me a perfect hug. I’m glad to report that I still love that boy.

1/12/11 The absolutely down-to-earth Robert Duvall being one of the most unpretentious speakers in West Hollywood after a screening of his superb performance in Get Low. I was amazed at how open and lovely he was. His answers to the SAG members questions was like a master class in acting! I appreciated every second of it. (His comments on working with Bill Murray, by the way? “He’s an interesting fellow. He’s a smart-ass with talent.” Loving it!) 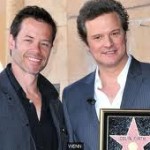 1/7/11 Colin Firth and Guy Pearce being utterly charming in their Q-and-A after one of the last industry screenings of The King’s Speech in West Hollywood. Guy looked adorable in his specs! (For my more mature readers, the audience that night included Joe Bologna and Renee Taylor, attorney Gloria Allred, and John Savage of The Deer Hunter.)

1/6/11 Former Broadway cast member Ben Vereen, and Modern Family star Jesse Tyler Ferguson, in the opening night audience of Hair at the Pantages, though not together. As a matter-of-fact, Ben was sitting right in front of yours truly!

1/1/11 Los Angeles krump dancer Oldz Kool showing off his moves with New York dance troupe Breeze, which includes young female dancer Caroline Clarke, on the plaza between the Plaza Hotel and the Apple Store on Fifth Avenue in New York City. The crowd was going wild! What a fabulous way to start off the year!