This final edition of Celeb Sightings for 2015 picks right up where the last one left off.  Two days later, actually.

And this time, I saved the best for last. (The big photo at the top, of the legendary Sidney Poitier and an adoring moi, Karen Salkin, is a clue.)  Actually, I believe that one is the best of the entire year! So, please don’t miss it. (Or any of them, for that matter.) 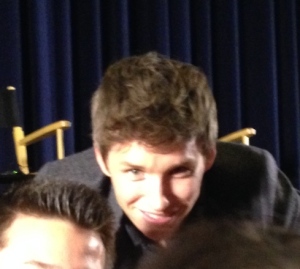 And good news for potential theatre audiences in LA: You can still go see all the shows I mention below! (If you’d like to know more about each one, I included the links to my all-positive-this-time reviews.)

11/21/15  This was a very juicy two-screening day, both at the same West Hollywood venue.  First up was The Danish Girl, with the fabulous bonus of getting to listen to the wonderful Eddie Redmayne speak after.  He was joined by his lovely, not-quite-a-celebrity-yet, very talented co-star in that film, Alicia Vikander. 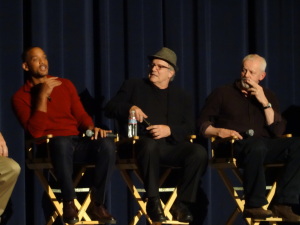 11/21/15  The second movie of the day was the informative Concussion.  And afterwards was a Q-and-A with Will Smith, the hilarious Albert Brooks, and the serious and incredible-in-this-film, David Morse.  One of the most fun panels ever. 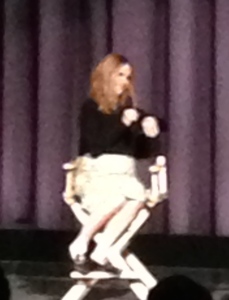 12/8/15 Idina Menzel, live in-person, onstage at the Pantages Theatre in Hollywood, starring in the Broadway musical, If/Then. I was in the fifth row center, so seeing her that close, even from the audience, was closer than I spy some other celebs even at a party! (She was fabulous, by the way, as expected. You can read my review of the show here: itsnotaboutme.tv/news/theatre-ifthen.)

12/9/15 I loved witnessing the confab of two classic sitcom actors, John O’Hurley (Seinfeld) and Ray Buktenica (Rhoda, House Calls, Life Goes On,) at the after-party for the opening of Peter Pan and Tinker Bell–A Pirates Christmas at the Pasadena Playhouse. I wonder if any ears were burning with that convo! (You can read my review of that whole magical evening here: itsnotaboutme.tv/news/theatre-peter-pan-and-tinker-bell-a-pirates-christmas.) 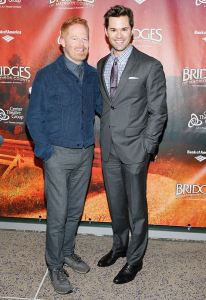 12/10/15 Perennial opening-nighter, Jesse Tyler Ferguson, (from Modern Family,) and Broadway star, Andrew Rannells, among the crowd for the opening of The Bridges of Madison County, The Broadway Musical at the Ahmanson Theatre downtown. (You can read my glowing review of the show here: itsnotaboutme.tv/news/theatre-the-bridges-of-madison-county-the-broadway-musical.)

12/11/15 My now personal pal, Oscar winner George Chakiris, sitting right behind me at Cirque du Soleil’s Kurios at Dodger Stadium! I always love running into him, and he even understood what I meant when I told him that every time I see him, I have the urge to “cut” somebody! (Because he was the leader of the Sharks in West Side Story, of course!) (You can read my review of the still-unbelievable Cirque here: itsnotaboutme.tv/news/live-production-cirque-du-soleils-kurios-cabinet-of-curiosities.)

12/13/15 Actor Michael O’Keefe, of Caddyshack fame, (not to mention being Bonnie Raitt’s ex,) at the opening night of The Christians at the Mark Taper Forum in DTLA. He was there to support his current wife, who was in the perplexing-yet-interesting play. (You can read my review of it here: itsnotaboutme.tv/news/theatre-the-christians.)

12/15/15 My old pal, Kyle Richards, one of the Real Housewives of Beverly Hills, in—guess where?–Beverly Hills, of course! (But to me, she’s just a nice, pretty girl I’ve known for a couple of decades; I’ve never even seen her show!) I was shopping in a store named Kyle, and I didn’t realize she was the owner! But when we saw each other, and were chatting, it became clear. She introduced me to her store partner, and then I looked around for awhile. Cool stuff!!! 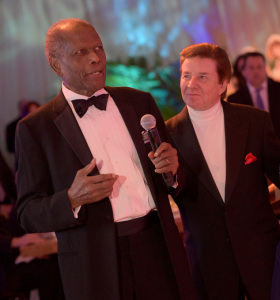 12/19/15 I couldn’t have ended the year better—with a dual sighting of former teen idol (turned police officer!,) Bobby Sherman and…Sidney Poitier! Who would have ever envisioned that duo?! But they have two things in common—kindness, and…me! (Bobby was a fan of my show way back when, and Sidney and I have a mutual really great friend, so we’re one degree of separation.) Mr. Poitier was being honored at this year’s Brigitte and Bobby Sherman Children’s Foundation Christmas Gala and Fundraiser for his ongoing commitment to the organization. (You can read all about the unbelievably wonderful event, and should do so, here: itsnotaboutme.tv/news/charityevent-brigitte-and-bobby-sherman-childrens-foundation-christmas-gala-and-fundraiser.)