This edition began with a bang—first with an important play opening, and then right on to all the Emmys events! And beyond. So, let’s just get right to them!

9/13/15  Alumnus of the very first season of American Idol, Tamyra Gray, at the opening of Real Woman Have Curves at the Pasadena Playhouse, and the after-party, as well.(If you missed it, you can read my review of the show, and the party, here: itsnotaboutme.tv/news/theatre-real-women-have-curves.)

9/15/15 I rode up on the elevator to the Wow Creations Gifting Suite in the Penthouse of the Luxe Rodeo Hotel in Beverly Hills with Khandi Alexander, who was an Emmy nominee for her role in Scandal. She was the nicest! The only people on there were Khandi and her friend, and my pal and me. Khandi just leaned over to ask us how we’re doing, and when I saw her at the Doris Bergman event two days later, she was already my New Best Friend! (Click here for more info on it all: itsnotaboutme.tv/news/gifting-suite-wow-creations-lifestyle-gifting-suite-in-celebration-of-the-2015-emmys.)

9/16/15 Tom Hardy, in Beverly Hills, at the only screening there will be for a long while of his new film, Legend, about London’s notorious Kray twins. (He plays them both, and is amazing!) 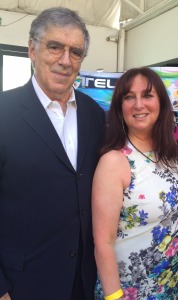 9/17/15 I’ve rarely had so much fun with so many celebs from different areas of show biz! Doris Bergman’s Emmys luncheon at the tony Fig and Olive restaurant in Beverly Hills was chock full of them! My favorite was Elliott Gould, with whom I had lunch, but I also loved hanging with my new-ish good buddy, Jason Ritter, choreographer extraordinaire Travis Wall, and the most handsome man there, Esai Morales. (You can read about them all here: itsnotaboutme.tv/news/gifting-suiteparty-doris-bergmans-2015-prime-time-emmy-style-lounge-party.)

9/30/15  Not that she’s a celebrity anymore, but ’70s TV star, Joan Van Ark, rushing by me outside the Ahmanson Theatre on opening night of The Sound of Music, reeking of nauseating, cheap-smelling perfume!  If she was, indeed, at the show, (and not just showing up for the after-party, which I thought might be the case, because she was going in the opposite direction to the exiting crowd,) I’m so glad she wasn’t sitting near me (and my asthma!) (Click here for my review of the musical: itsnotaboutme.tv/news/theatre-the-sound-of-music.)

10/4/15  Marcia Gay Harden, (who’s looking the same age she did when I first became aware of her a zillion years ago, so that was bad for her then, but great for her now,) and Marisa Tomei, who was seriously looking like a homeless bag lady, at the Mark Taper Forum on opening night of Appropriate.  No fooling around–I can go out as casually-dressed as the next gal, but Marisa looked downright dirty, from unwashed hair to filthy sneakers.  And trust me, none of it was in a hip way.(You can read my review of the play here: itsnotaboutme.tv/news/theatre-appropriate.) 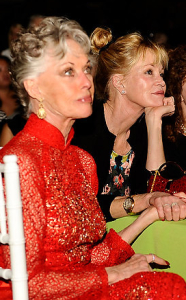 10/8/15 Tippi Hedren and her daughter Melanie Griffith, at a very interesting event at a nail salon in Brentwood.  Did any of us know that Tippi is the person responsible for bring Vietnamese refugees over here to work in nail salons?!  It was an eye-opening presentation, and a lovely event overall.

10/18/15  Courtney Love, (whose photo at the after-party, taken by Roz Wolf, is featured at the top,) starring in Kansas City Choir Boy at the Kirk Douglas Theatre in Culver City.  The way the stage was set-up, I was really up-close and personal with her, almost as if we were having a conversation! And I’m happy to report that she looks so much better than she does in photos.  No fooling.  My friend even thought she was pretty, with good skin!  (For the rest of the review, click here: itsnotaboutme.tv/news/theatremusic-kansas-city-choir-boy.)