This is the most exciting, diverse, fun group of Celeb Sightings I’ve ever published! They’re from all different worlds, and many I’ve never spied anywhere in person before! The most fun one is the eighth one down, (on 12/7,) but please don’t miss any of them! I love that they begin and end with composers, but on such varied areas of that spectrum. [Note: Sorry the pix are so blurry; I choose to sit in the back for the screenings, so these are the best I can take.] 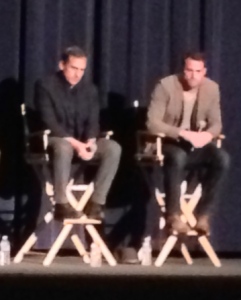 11/7/14 Perhaps not celebrities per se, but certainly so in the Broadway world, song-writing duo, David Shire and Richard Maltby. They were at the Pasadena Playhouse, where their next collaboration, Waterfall, will take place in the Spring. (My preview here: itsnotaboutme.tv/news/theatreeventsupcoming-waterfall-preview.)

11/15/14 Channing Tatum and Steve Carrell (there’s a duo for you,) in West Hollywood, speaking after an industry screening of their film, Foxcatcher. It was, shockingly, the dullest Q-and-A I’ve ever been a witness to! (My review here: itsnotaboutme.tv/news/movie-review-foxcatcher.)

11/22/14 Kevin Costner speaking after the SAG screening of his excellent latest film, Black or White, in West Hollywood. Conversely to the guys above, Kevin was absolutely charming, intelligent, and informative! I was in shock over that revelation, as well!

11/23/14 Barney Miller‘s Hal Linden, Monty Python‘s Eric Idle, and Smallville‘s John Glover (although not together) at the opening night of What The Butler Saw at the Mark Taper Forum in downtown LA. (My review here: itsnotaboutme.tv/news/theatre-what-the-butler-saw.) 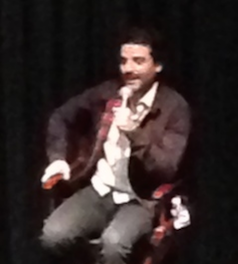 Oscar Isaac, sporting a ‘stache for his next gig. Photo by Karen Salkin.

12/4/14 Oscar Isaac doing the Q-and-A after a screening of his waste-of-time film, A Most Violent Year, in West Los Angeles. He was very much more charming and entertaining than the impression I had of him last year, when he spoke after Inside Llewyn Davis.

12/5/14 Maria Shriver, and a young lady who looked to be her daughter, at the Montana Avenue Holiday Walk in Santa Monica. I knew her years ago when I was doing my show, Karen’s Restaurant Revue, and she and her husband Arnold Schwarzenegger were big fans of mine, and she was always lovely. I would have loved to stop and chat with her that evening, but the sidewalks were uber-packed, and I just could not be rude and add to the human congestion. Oh well.

12/6/14 Academy Award-winning actress Geena Davis rushing through the Grove shopping center in West Hollywood. I knew the feeling—I was desperate to get out of there myself! 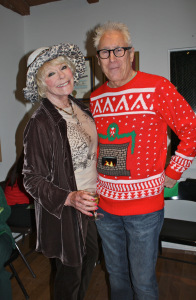 Elke Sommer and Ray Buktenica. Photo by Elke Heitmayer. (How weird is that, to have two Elkes together?)

12/7/14 Hollywood icon Elke Sommer admiring the “Ugly Christmas Sweater” of fellow thespian Ray Buktenica, at a private holiday party in Bel-Air. It was big smiles all around during their exchange. Elke has starred in over two hundred films, (between America and Germany,) while Ray is the veteran of hundreds of television series and episodics. It was a really fun meeting to witness!

12/10/14 Al Pacino (whose photo is at the top of this column) in West LA after an industry screening of his latest film, The Humbling. Boy, can that man talk!!! He would have given me a run for my money on my former television show, Karen’s Restaurant Revue! At the Q-and-A, he’d be asked one quick question, (such as, “What’s a line you like from one of your films?,”) and he’d talk for ten minutes! What a real treat!

12/11/14 At the opening of Sleeping Beauty and Her Winter Knight at the Pasadena Playhouse, I was thrilled and honored to meet Ben Vereen!!! OMG! He was just standing there by himself at intermission, and I just had to tell him how much I love him! He could not have been appreciative and gracious!!! (He had starred in their holiday show last year, as the Genie in Aladdin.) Sally Kellerman and Jenna Elfman were also there on opening night, but I had eyes for only Ben. (My review of the wonderful show, and whole entire evening, here: itsnotaboutme.tv/news/theatre-sleeping-beauty-and-her-winter-knight.) 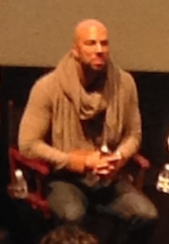 12/14/14 Sean Hayes, Jesse Tyler Ferguson, and married-to-each-other actors Juliet Mills and Maxwell Caulfield, at opening night of Blithe Spirit at the Ahmanson Theatre in downtown LA. We were all in the same area at intermission, and I’m so glad I got to tell Sean how much I loved his sitcom last year, (that should not have been canceled!!!) (My review of the show, starring the on-and-only Angela Lansbury, here: itsnotaboutme.tv/news/theatre-blithe-spirit.)

12/18/14 Rapper, hip-hop artist, composer, and more recently, actor, Common, in WLA, at one of the few screenings of Selma, which he’s in. He was a good celeb to close out my final Celeb Sightings of 2014 with!