I’m in New York right now, checking to see if this coast’s celeb sightings can compare with that of Los Angeles. In the meantime, here are the highlights of the ones I spotted over the previous couple of months. 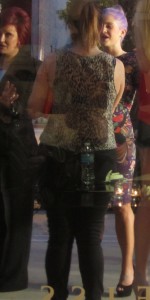 Sharon and Kelly Osbourne, through the window of the store. All photos by Karen Salkin.

4/19/12 Two of the female Osbournes, Sharon and Kelly, on the way into Kreiss Furniture’s anniversary party, which benefitted Sharon’s Cancer Foundation. It was, by far, the best Kelly has ever looked in her life, purple tresses and all!

4/23/12 Landon Donovan, the star soccer player for not only the L.A. Galaxy but the U.S. National team, as well, relaxing in a private poolside cabana on the roof of West Hollywood’s London Hotel, surrounded by a small group of pals. He was the most famous guest at the Jordan Vineyard & Winery 40th anniversary party. Well, excluding yours truly, of course!

4/29/12 As I mentioned when I reviewed The Heiress at the Pasadena Playhouse, starring Heather Tom from The Young and the Restless and The Bold and the Beautiful, in the title role, there were several of her soap cast-mates there to support her on opening night: Don Diamont, Christina LeBlanc, and the still handsome John McCook, among others. But, the biggest star of the evening was Richard Chamberlain, starring as her stern, unloving father, whom I had the pleasure of meeting at the after-party. 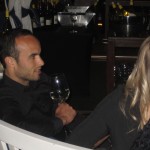 5/4/12 Two stars of the krump dancing world, Oldz Kool and ELI, giving each other warm greetings at casual eatery Crave in Sherman Oaks. The chill assemblage there was all smiles, taking in the fun scene.

5/19/12 Glee‘s “Artie,” Kevin McHale at the opening night of Annie at the Glendale Centre Theatre. Because of the way in which that theatre seating is configured (a-round-in-a-square,) I got to occasionally watch him enjoying himself. Of course, I paid more attention to the action onstage, but every time I did look over in his direction, he was really enjoying himself. He was a great, enthusiastic audience member. Props to him for that! 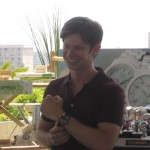 6/1/12 Spotted at the GBK MTV Movie Awards gifting suite (though not together): Jennifer Love Hewitt, Iqbal Theba who plays Principal Figgins on Glee, and Lee Norris, who was Mouth on the late, lamented (by me) One Tree Hill. He and I are actually one degree of separation from each other because I starred in a movie with his TV roommate, Antwon Tanner. I love when that happens.

6/5/12 Im always happy to see my old pal Bruce Vilanche, which I did at the opening night of The Addams Family at the Pantages Theatre. He told me that the show had really changed since Broadway,(as did several other audience members–tell me about the show differences, not change themselves,) and we compared notes about our early-the-next-morning flights, his to Pittsburgh, mine to the Big Apple. I doubt that his seatmate on the plane was as fabulous as mine, though, so please read the next celeb sighting to find out the dish.

6/6/12 OMG! Lily Tomlin!!! She was my fabulous seatmate! I’m so glad that I took Jet Blue this time! I was depressed about my trip, and chatting with Lily cheered me right up. I had the best encounter with her many years ago; a comedy writer recognized me when he was with Lily, and when he said to her, “Look Lily, it’s Karen,” she exclaimed, ” Karen from cable?!,” But I met her a few years after that, and I don’t think she knew who I was anymore, which is totally understandable. But on this most recent occasion, we just began talking, and she made the flight the most wonderful one of my life!!! Besides that she’s fascinating and lovely on her own, her laughter at just about everything I said renewed my long-gone confidence. Now I’m forever indebted to Lily Tomlin. [Note: in case you were wondering just who it was who suggested that I live-tweet the Tonys, this is your answer!]