[Note: Okay, these took place just a week and half ago, but I know it’s old news in the fast-paced world of sports. And I’ve been totally entrenched in the NCAA Basketball championship now, so it’s hard to switch my attention back to skating. But, I wrote this when the Worlds were being played-out, and just never found a day to publish it. And I’m still upset about the parts of the competition that I wrote about here. So, this is a case of better late than never.]

I’m too exhausted from watching every second of this month’s World Figure Skating Championships to write all my thoughts about the competitions, but I have to weigh-in at least a little bit. 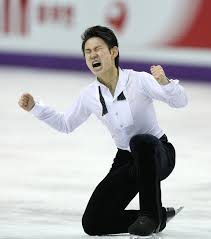 Basically, I’m disgusted by some of the results, mainly the Men’s.

We all thought this newish scoring system would ensure fairness. But we were wrong. Those idiot judges can manipulate the performance scores to hold up favorites or knock down their least favorites.

Such was the case in two of the four disciplines. (And, as I mentioned at the top, I watched every second of the coverage. Believe me, that’s true dedication, especially on Dish Network’s crappy non-high-def Universal Sports, which is so fuzzy I had to keep checking my glasses.) But even through that fuzz, I could see what was happening better than those terrible judges obviously did.

France’s Brian Joubert performed jump after jump after jump, all beautifully, and manly, to boot, but they knocked him way down in the scores. And their pet, Patrick Chan, not only fell on his ass twice, but he turned triples into doubles, and had a bunch of other shaky landings. It was pathetic. But, they gave him über high marks because they wanted him to win. Which he did, undeservedly so.

Dennis Ten, from Kazakhstan, got screwed, too. He received excellent marks. But they should have given him even more because he totally deserved the win! He came in second to Chan by 1.3 points. He did win the long program, but he should have had at least 1.4 more points in my opinion. His program was perhaps the most exciting men’s one I’ve seen in a very long time!

He first came to my attention at the 2009 worlds when I got to see him live because it was held in Los Angeles that year. I was amazed. And that was without the benefit of the television commentators telling me what was up. I just saw him move on the ice and my jaw dropped.

I’ve been looking for him ever since, but he’s rarely done well enough to garner the little TV coverage there is nowadays. Now, here he was again, and I’m sure he’s thrilled to have won the silver medal, but it should have been the gold.

[Note: way after I wrote this, while looking for pictures of the competition to post here, I noticed that I wasn’t alone in my disgust over the situation, which I was glad to see.]

The same type of inflated judging was seen in the pairs. The correct duo, Russians, did get the win. But the German pair, whom I’m a fan of, really messed-up and still came in second, which was far from fair. The sport really needs to clean up this mess before next year’s Olympics. 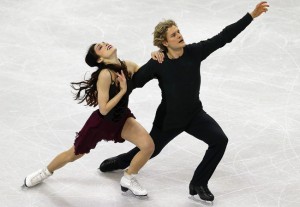 In the ice dancing competition, which is basically between Davis and White of the United States and Virtue and Moir of Canada, was the most dramatic. The correct pair, Davis and White, won, so no controversy there. I just don’t understand why it’s always such a close contest between the two teams, with the latter usually winning, when the Americans are better, in my humble opinion.

Davis and White are each better individually than Virtue and Moir are, and definitely better together. I know the Canadians are excellent, but Charlie and Meryl’s performances always seem so far above theirs. But every commentator makes an equal fuss about both teams.

I must commend former ice dancer Tanith Belbin for seeming totally unbiased as a commentator, when Charlie White is her serious boyfriend! I don’t think I could hold back if I was commentating on a krump dancing contest, and Mr. X was involved! Now I feel guilty that I never used to like her. I always liked her pro partner, Ben Agosto, who’s one of the nicest skaters I’ve ever met. But I never liked Tanith. Perhaps that’s because of her association with creepy Evan Lysacek. They said they were a couple, but according to several of his training mates I met, she was his beard, which is what I thought, too. So, I disliked her for what I perceived as the dishonesty of the situation, whether I was correct or not. 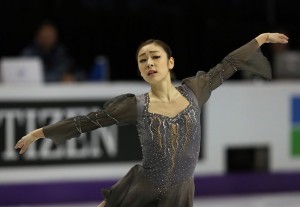 Lastly, let me discuss the ladies event. Since Yuna Kim came back to competition for the Worlds, after sitting it all out for a couple of years, we all knew that no one else had a chance, even though I always root for Japan’s Mao Asada. She got screwed out of going to the Olympics in 2006, when she would have won for sure, because she was a bit too young, which is a stupid rule to begin with.

I’ve seen both girls skate in person, and still thought that Mao was better. I never got the fuss about Yuna…until this long program of hers. It was like butter. And she’s the only one who never looks nervous, therefore, we’re put at ease.

Now we can relax about figure skating until the Fall, when the grueling ice skating season starts again, culminating in the much-anticipated 21014 Olympics in Sochi, Russia. I hope for great health for all the athletes, and totally fair judging. Let the Games begin! (But not too soon. I need to rest up first.)