Trending
You are at:Home»BASKETBALL»SPORTS THOUGHTS/BASKETBALL/TENNIS: AWFUL SPORTS BEHAVIOR, ALL THE WAY AROUND THIS WEEK!
By Karen Salkin on June 4, 2021 · BASKETBALL, SPORTS THOUGHTS, TENNIS

AWFUL SPORTS BEHAVIOR, ALL THE WAY AROUND THIS WEEK!

There’s so much to discuss on this front! Every time I started to write an article about one bad sports behavior, another one popped-up!!!

So I’ve put a few of them together for you here.

First of all, is everyone still happy to have fans back at arenas, after all this awful behavior for the past couple of weeks??? I, for one, am not. (And I hate the sound, as well. The voices of the commentators need to be mixed better in production because it’s often hard to make out what they’re saying with all the crowd noise drowning them out. And the weird thing is—the broadcasters are rarely in the arenas anymore! They do their parts from either a remote studio or their own homes! No viewers are that crazy that they need to hear loud crowd noise to enjoy a televised game!!!) 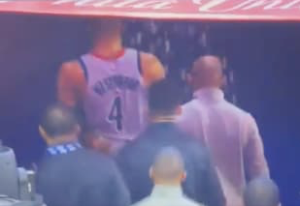 Popcorn being thrown down on Russell Westbrook as he leaves the court in Philly.

I guess the many basketball analysts who have been lauding having the crowds back after the lockdown had forgotten about all the rude and disgusting behavior that fans exhibit. It usually gets worse as the drinking goes on. I know the venues make tons of money on selling alcohol, but it’s insane to do so. Just about every shot I’ve seen of the crowd since the NBA Play-offs began two weeks ago features gigantic beer cans in the hands of the rowdy fans.

In the past week alone, the family of opposing player, Ja Morant, was verbally abused in Utah; a fan of the Washington Wizards (and apparently by his attire, also of that city’s football team,) ran onto the court, (which I have never, ever seen before!); that same team’s star player, Russell Westbrook, was showered with popcorn as he left a game in Philadelphia; a bottle was hurled at opposing (and former hometown) player, Kyrie Irving, in Boston; and the most disgusting act of all—a “fan” of the Knicks spat at the Hawks’ star, Trae Young!!! Ugh. (But that hock actually landed on the woman in front of the perpetrator. That’s an even bigger ewww.)

Supposedly, all those creeps have been banned for life, with the Boston dude even being arrested, but more has to be done to protect the players. I don’t have a solution myself, but someone needs to come up with something, stat! (Charles Barkley says the offended player should be able to fight the violent fan right then and there! Maybe something short of that should be allowed.) 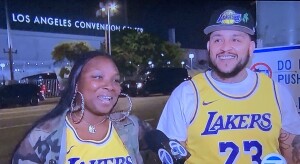 Two idiototic Lakers “fans” on the local news, giddily blaming LeBron James for the teams’ first round exit from the play-offs. Photo by Karen Salkin.

And here’s another instance of disrespectful fans, but this time of their own team!!! When the very hobbled Lakers failed to make it out of the first round last night, many supposed “fans” decided to blame it on…LeBron James! I promise you—even though I love the city of LA more than just about anyone else, I’ve never been a fan of the Lakers, even with LeBron James, of whom I am a fan. A big one. That man is amazing. He’s been injured this entire time, and at thirty-eight, is one of the oldest active players. And he’s still the best one, as well! Yet moronic Lakers fans are blaming the loss on him! How is that even possible?! He gave every ounce of himself to try to get at least one more win. It’s shocking that they even won two games of the series. The idiots in the picture to the left said he should have tried harder, and the guy added that he wants to go burn LeBron’s jersey that he’s wearing. That is so offensive. The fans in Madison Square Garden gave their New York Knicks a standing ovation when their season was over the other night, to thank them for their efforts this year. Who would have ever thought that the sports fans of LA would be so outdone in class by those in the Big Apple? As a resident of both places, I’m ashamed of some of the people here on the West Coast. They don’t deserve LeBron to play for them next year.

While I absolutely abhor all those sickening “fan” behaviors, I also totally condemn the words and behavior of Brooklyn Nets star, Kyrie Irving.

I don’t remember ever liking Kyrie. Not even when I rooted hard for the LeBron-led Cleveland Cavaliers, the team Kyrie was a big part of.

For background of his horrible behavior this week, Kyrie was a Boston Celtic for two years, from 2017-2019. He had pledged to remain a Celtic for the remainder of his career, which he obviously didn’t live up to, since he’s now a Brooklyn Net. The Nets just beat his old team, badly, in the first round of the Play-offs. 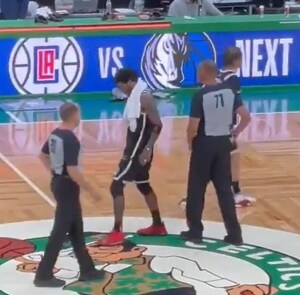 Rotten Brooklyn Net Kyrie Irving rubbing his foot on the logo of his former team, the Boston Celtics.

And after winning a game in Boston the other night, as all the players walked off the floor, a**hole Kyrie walked back to mid-court, and rubbed his foot on the Celtics logo, like he was stomping-out a cigarette! It was a beyond-unnecessary move. He’s the one who left the Celtics, not the other way around. The Celtics should be rubbing the bottom of their shoes on an image of Kyrie!!!

What makes that episode even more pathetic is that for his entire life, he’s had a major connection to Boston! Since his father played college ball at Boston University, Kyrie spent tons of time in the Boston area growing-up. Talk about being a turncoat!

So right after that despicable little bit of theatrics from Kyrie is when the fan threw the bottle at him. As we all know, two wrongs don’t make a right, so that action was wrong, no matter how disrespectful Kyrie was to the Celtics organization that night. (And ever!) [You can see the bottle being thrown at Kyrie’s head in the pic at the top of this page.]

But then Kyrie talked about it in his post-game press conference, of course. And I was aghast at two of his statements. He said no one should throw things at the players because “we’re not animals,” and something else to the effect that “this isn’t the theatre” so people shouldn’t “throw tomatoes” at them. So…Kyrie thinks it’s okay to abuse animals and actors??? I was appalled. Either he’s an idiot who doesn’t know better, or he really feels that way about animals and actors. Either way, what insensitive sentences those were!

But Kyrie just may be correct on one level—he’s uniting the world of basketball fans…against the Nets! So there’s that.

I’m about to say what most of us are thinking, but because it involves mental health, we’re not supposed to say it out loud.

So, World #2 tennis star, Naomi Osaka, refused to talk to the press after her first-round win at the French Open last week, citing that doing so negatively affects her mental health. When the tournament fined her, and said she must fulfill her media obligations, (which are required of all the players, win or lose,) she chose to withdraw from the tourney. And head home to her seven million dollar mansion in Los Angeles. (Which she bought from Nick Jonas, by the way.)

So yes, of course no one on earth should be forced to do anything to harm their mental health. But then you must not participate in any activity, professional or otherwise, that will do that to yourself! It doesn’t matter if you’re the world’s best at anything—if part of the job is speaking to the press, or anything else one is uncomfortable with, then you absolutely cannot do that as a job!!! Period. Dot, dash, end of story. 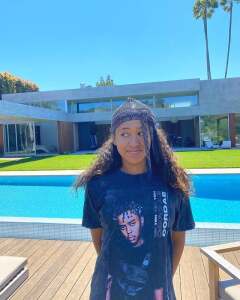 Naomi Osaka at her seven million dollar mansion, which she bought from Nick Jonas!

Naomi has been a pro tennis player for years; she knows the drill. Post-match press conferences are part of the job. If you want to play in events where they’re required, such as the four Majors, you must commit to speaking to the press.

At first, Mr. X thought Naomi was a teen-ager, so he agreed with her stance. But when he learned she’s not only twenty-three, but living in her own place with her rapper beau, he realized she’s old enough to know better.

Many of the long-time stars of the sport, like Billie Jean King and John McEnroe, said that the media is necessary to them. King wrote, “I have always believed that as professional athletes we have a responsibility to make ourselves available to the media.  The media still play an important role in telling our story.” And tennis champion Rafa Nadal said he respects Naomi’s decision, but “…we as sports people…need to be ready to accept the questions and to try to produce an answer, no? I understand her, but on the other hand, for me, I mean, without the press, without the people who normally travel, who are writing the news and achievements that we are having around the world, we probably will not be the athletes that we are today. We [wouldn’t] have the recognition that we have around the world, and we will not be that popular, no?” And World #1 female player, the lovely Ash Barty, simply stated, “We know what we sign up for as professional tennis players.”

But after what I’m sure was pressure from somewhere on the outside, some of them tried to walk their comments back. And then Chris Evert said their sport must take better care of their young players. But I feel they already do. There’s always an official in those pressers who cuts the questions short when they feel the players, especially after a loss, just need to get out of there. I’ve seen it many times.

So, how should tennis, and all sports, actually, proceed? Well, since Naomi is the only one complaining, she should just not enter any more tournaments if she doesn’t feel up to playing by the rules. And, for the sport itself to look sort-of compassionate, they can limit the media questions even more than they already do, especially for the teens on the tour. (And people who feel like Naomi does can always do the pressers and just say, “No comment on that one,” to any questions they don’t feel like answering.)

I’m proud of Wimbledon for recently stating that everyone must abide by the rules or not enter. But I’m sure I’m going to hear the situation discussed ad nauseum during that fortnight. And I can tell you right now—my mental health will suffer for having to listen to all those (mostly “politically correct”) opinions!