I’m thrilled to report that March Madness will begin today. Last Friday, March 11, was exactly two years since I returned home from a party at around 10PM, and watched the NBA shockingly close down because of Covid. That was heartbreakingly followed the next day by the college basketball tournament March Madness being cancelled. My heart bled for all concerned.

I can’t wait for the action to begin!

My feelings were the least of it, of course, although March Madness is one of my favorite events of each year! I watch just about every second of every game. (But even I can’t catch all of the action on the days that feature sixteen games each!)

There are always so many exciting games in the tourney; a lot of them even come down to the final shot, which is uber-exciting.

As always, I suggest that everyone watch March Madness. I know that some basketball fans like to think they’re superior by watching only professional games, but those who don’t bother with college ball are really missing out. Where do they think most of the future NBA stars come from? And even the kids who don’t go pro when they graduate play their hearts out now. It’s great to see guys who know that this will be it for their basketball careers play for just the love of the game, rather than to show-off their skills to NBA scouts. 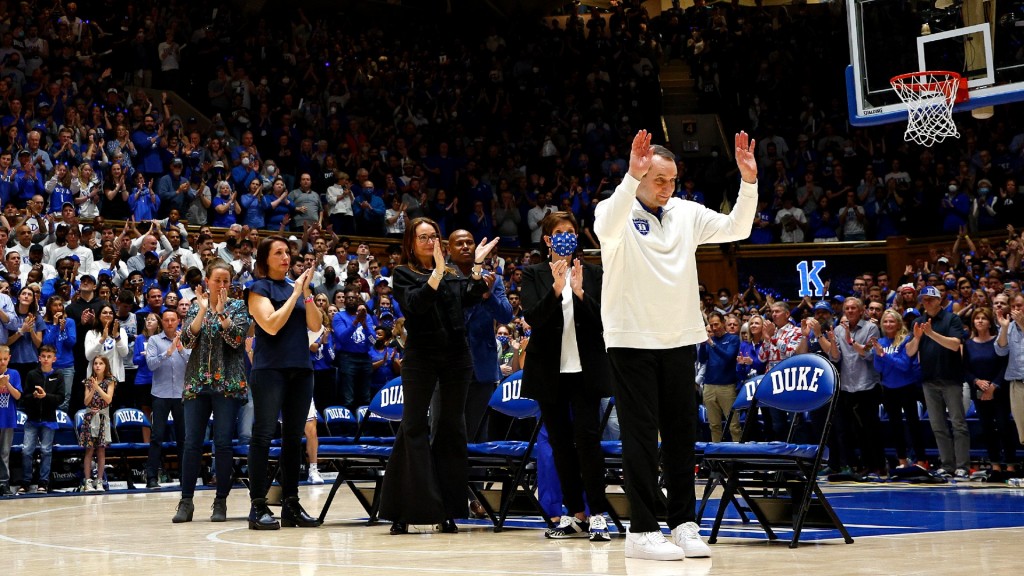 Duke’s Coach K in his final game for the school.

This year’s proceedings will be especially interesting (and historic!,) and definitely bittersweet, because it’s the last time we’ll see Duke Head Coach, Mike Krzyzewski, in it! We didn’t have that penultimate pleasure last year because, shockingly, Duke didn’t make it into the tournament in that Covid-crazy year, so this one is extra-special on that front, as well. In case you don’t know why I say that, Coach K announced last year that this is to be his final season at Duke. (And most likely coaching anywhere, save for an occasional national team.) He’s been Head Coach of that team since 1983, and, at one point, had made twenty-four consecutive tourney appearances with them, which is a record*, so this will indeed be an auspicious occasion. I’m already welling-up with tears just writing this. *[Note: Michigan State head coach Tom Izzo has just tied that record. But this swan song for Coach K will be his thirty-sixth March Madness appearance, in general!] 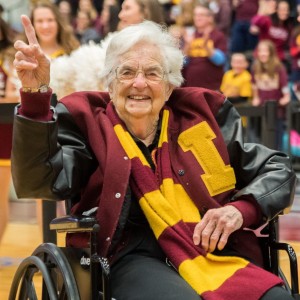 Also back, but very hopefully not even close to the last time, is Loyola Chicago‘s good luck charm, one-hundred-two-year-old chaplain Sister Jean, the person in this world I’d most like to be friends with. She’s the most positive person I’ve ever witnessed! There’s always a smile on her face, no matter what is happening. (The team also has a new coach, Drew Valentine, who, at only thirty, is the youngest coach in the tourney.)

I’m rooting for those two teams to go far, of course, but I’m mainly rooting for one of my four colleges, UCLA, (whose last Championship team I was friends with,) along with Providence College because it’s right across the way from another one of my former colleges, RIC, so I’ve always followed them a bit.

But the school I want to win it all is Gonzaga! I’m thrilled to see that they’re the overall #1 seed again, just as they were last year, when, after going undefeated all season, (which is a just-about-impossible achievement in college hoops,) they lost in the Championship game. That broke the hearts of many of us, so I hope that situation is rectified this year.

Two other little notes: It’s always exciting to see new teams in the tournament each year. One of the surprises this time is Montana State, for the first time since 1996!

The other thing is that, after all these years, I still don’t know why some of the teams who play in the “First Four,” (ahead of the official First Round,) are #11 seeds, instead of all four teams being the lowly #16s. If any of you can explain that to me, please leave a comment to let us all in on the reasoning. 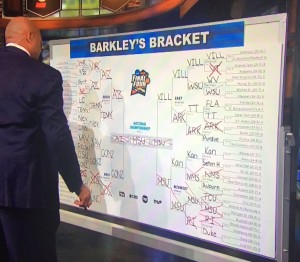 In a previous year, analyst Charles Barkley with one of his always-wrong brackets.

Other than that perennial little confusion, as you can tell, I’m mad about March Madness! I’ve been fascinated by this college basketball tournament for a few decades now. I’m probably the only person in the country, (outside of the commentators, but they get paid for that,) who watches at least parts of every game of the tournament; I don’t speed through them, (except for commercials, of course, and at the start of the tourney, when, as I said above, there are waaay too many games on one day to watch every second of each one.) I’m sure that most of you think I’m crazy, and I am—crazy about basketball!!!

But, of course, I’m not the only one who looks forward to March Madness all year. Sooo many others do, as well. The excitement of it all doesn’t just involve the viewers and players—it’s the coaches, cheerleaders, student body in general, fans, and even the bands and mascots!!! The NCAA tourney is so important to college life. And for most of these players, who won’t go pro after school, it’s the opportunity of a lifetime. Even for the athletes who don’t win, nor even make it all the way to the prestigious Final Four, it’s an experience that stays with them for life.

March Madness is truly a lesson in enjoying the journey. Sixty-eight teams are in the college basketball tournament, which means that sixty-seven will leave broken-hearted. But I always hope that the inevitable loss doesn’t diminish the fun the players, coaches, families, students, and fans in general have along the way. Just making it into the tournament is a major achievement! I love watching the teams go nuts when they hear their names announced on Selection Sunday, even when they know they’re already in “The Big Dance.” Their joy always puts a smile on my face and literally brings tears to my eyes. 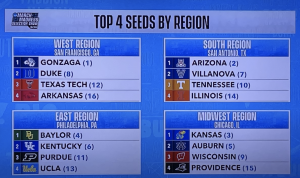 Maybe Greg Gumbel should have consulted his show’s own graphic before declaring multiple schools to be the “overall #1 seed!” Photo by Karen Salkin.

Speaking of Selection Sunday, does the host of that show, Greg Gumbel, not know the meaning of the word “overall???” He named three schools as the “overall number one seed!” That’s just not possible, which he should know, even if the copy he was reading was the culprit.  But, as stated above, I’m thrilled to say that it is, indeed, the Zags.

Now, going back to what puts a smile on my face, a big one is always planted there by the hilarious comments from analyst Charles Barkley–he’s worth the price of admission alone!

Let me end by congratulating all the college men who are playing in this historic tournament. And remind them to just be proud and happy that they had the experience, win or lose. I send major kudos to all concerned.