Between this week-end’s National Figure Skating Championships and the Australian Open tennis tournament finals, which ware being shown live in the middle of the night, I’m exhausted. But, of course, I have many thoughts on what took place. Here are just some quick ones, so that I can finally get some sleep.

All my favorites won! The Ice Dance results were the only lock, with Meryl Davis and Charlie White, two of the most All-American names I’ve ever had to type, being head and shoulders above the up-and-coming competition.

But the other three disciplines were exciting contests from start to finish. I’m thrilled that the most artistic female skater, Alissa Czisny, re-claimed her crown from two seasons ago. She usually falls on her jumps and takes herself out of contention, but not this year. I’m extremely sad, though, that adorable Mirai Nagasu dropped to third place and will not get to go to the World Championships, after finishing a fabulous fourth at last year’s Olympics.

And I couldn’t be more thrilled for the most popular national male skater competing today, winner Ryan Bradley. I was holding my breath until he finished his long program and took the crown. It was exciting, though, to see newcomer Richard Dornbush move up from seventh place after the Short Program to take second! And third place finisher Ross Miner, at his first Senior Nationals, skated the most like what I feel a champion should. So, props to all of them! (I do feel bad for last year’s champ, Jeremy Abbott, to have come in fourth, though, and therefore be off the world team. Oh well.) 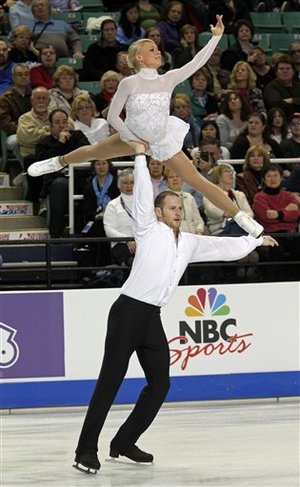 But the best performance of the entire championships, to me, was the long program of Pairs Champions, Caitlin Yankowskas and John Coughlin. Caitlin was absolutely breath-taking. I have not seen such grace in a Pairs girl possibly ever! She skated like a Russian Pairs lady, although I can’t even remember one of those who were as graceful as she. Ekaterina Gordeeva is the closest in my lifetime, and I think that Caitlin outdid even her.

The weirdest part is that the announcers, Scott Hamilton and Sandra Bezic, to whom I’m even related, never even once mentioned it!!! All they talked about was that John’s mother had died a year ago. It was just really odd. Mr. X and I were sitting here with our mouths open at this girl’s beauty on the ice, and the pros didn’t have a clue. Shame on them. [Note: I’m never a fan of the commentating of these two, so I wasn’t really surprised.]

Also shame on John for not even looking at his poor partner when they won. He was making it all about him. Every comment he made post-performance was for the camera and not really for whomever it was he was talking to off-ice. That made me not want to root for him. And in the on-air interview, that lovely girl never took her eyes off him, while he never acknowledged her once! I’ll give him a pass this time because possibly he was too overwhelmed to act normal, but if he snubs Caitlin once more, I’ll pray she finds a partner worthy of her before the 2014 Winter Olympics. [Note: in my opinion, they won because of Caitlin, and not John. He’s not even close to artistic, and is just a big galoot back-drop for her beauty on the ice.]

Admittedly, I didn’t watch every second of this tournament, as I do Wimbledon and the US Open. I just don’t have that kind-of time in January, with the Golden Globes suites, football play-offs, and my birthday being the same time. But I did stay up overnight all week-end to watch the finals.

And I must say that, with four good people as the finalists of both sex singles, I think it’s the first time I did not know for whom to root. After much reflection, I backed the two eventual winners. It was more than a breath of fresh air to have two lovely women, Kim Clijsters and Li Na, in the final. It seems that everyone had long forgotten about the more-than-creepy Williams sisters and we could just relax and enjoy. (I found-out this morning that their disgusting mother has been tweeting nasty things about Kim, who’s considered the nicest person ever on tour! I guess the apples didn’t fall far from the tree, which I’ve known forever, but I was shocked at the matriarch’s total lack of class.)

Anyhow, even in broken English, Li Na is the most amusing tennis player since the men’s champion, Novak Djokovic. I wanted to root for her, as well, but, since I really wanted Kim to win her first non-US Open championship, I was hoping that Na (which is her first name) would be satisfied with being the first Asian woman to reach the final of a Major.

It took three sets, (she lost the first,) but Kim did triumph in the end. The best part was their post-match speeches. More class you could not find anywhere in sports. Both girls handled their duties exceptionally well, and we, the audience didn’t want them to stop. The Ladies Final was truly a pleasure. 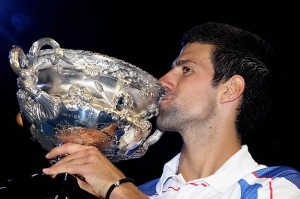 I had more mixed feelings for the Men’s Final. Novak Djokovic had just beaten my beloved Roger Federer to get into the final, so perhaps I should really not have been in his corner. But he always appears to be a nice, honest guy, so I just can’t dislike him. And he’s the only funny tennis player I’ve ever seen. His spot-on imitations of some of the other players are classic!

But he had won a Major once before, (this one, to be exact,) three years ago, and poor put-upon by the British press Andy Murray has zero Major titles to his name. And they’ve been almost best friends since they were juniors ten years ago.

I always wish I could ask Roger whom he prefers in situations like this, the guy who beat him or that guy’s new opponent, but since that’s impossible, I figured I’d let the action unfold and see who moves me. When Novak beat Andy in straight sets, which is the same thing he did to Roger, it made me feel a tad better because, as the announcers said, no one was going to beat Novak in this tournament. And that they gave each other a big hug at the end of course choked me up. (Like I wasn’t crying already!)

So, both Finals worked out really well. I’m still sick for Roger, but the dude will turn thirty in a few months! I’m just praying that he can finally win an Olympic singles gold medal next summer, and then I’ll be prepared to move on the “post-Federer era,” as it’s being called. I’ll have my fingers crossed for him always until he retires from the game. 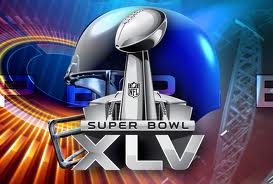 So now, with the poor Jets falling short again, and my New York Giants not even coming close in a late-season meltdown, for whom do I root on Sunday? I’ve just never liked the Green Bay Packers for some inexplicable reason, and I did used to semi-like the Steelers way back in the day, but how do I root for an accused rapist?

Who knows if Ben Roethlisberger really did what he was accused of, but if he did, and is getting off scot-free, I couldn’t bear it. I know he’s never been charged, but the fact that he’s had two accusers over the years gives me pause. Again, I don’t know what really happened, and public figures are always open to false accusations, and there are so very many liars are out there, that I really don’t know what to think.

When I was little, my family stayed at the University of Rhode Island for many summers, a place I’m still very attached to. We got to live in the dorms and it was just the most fun in the world. Most nights, all of us would gather in the dorm lounge, and guess who always joined us my first summer there? The Pittsburgh Steelers! I think the university was their training camp, or something like that, and they were housed in our “family dorm.” Being a little girl, they looked even more giant than they were, and were nice to us kids, so I had planned to root for them always, which I did for a little while.

But now they beat my Jets, so it’s the Roger Federer conundrum all over again–would the Jets want their beaters to triumph, or the other team? I think you always root for your conference to win. (My old UCLA basketball champions of 1995 pals taught me that.)

I think I’ll just kick back on Superbowl Sunday with some snacks, and let it play out and see who deserves it. And just concentrate on the half-time show and commercials. So, Go Doritos!