NEW SKATING ANALYST TEAM OF JOHNNY WEIR AND TARA LIPINSKI, AND OTHER THOUGHTS ON THIS SKATING SEASON

With the 2015 Figure Skating National Championships taking place this week, (and being televised this week-end,) I’m finally forcing myself to make some time to weigh-in on what everyone who knows how involved I am with ice skating keeps asking me for all season—my opinions on Johnny Weir and Tara Lipinski replacing the former NBC analysts, Scott Hamilton and Sandra Bezic (who is, in actuality, my cousin-in-law, although we’ve met each other just a couple of times.) They worked on most of the seven competitions in this season’s Grand Pix Series, so I got that many chances to see what they brought to the table. (Or the rink, as the case may be.)

First of all, sadly, I’m not as into the sport as I was before Champions On Ice folded a few years ago, when I knew so many people on that tour. I just don’t have the time anymore. (And Stars On Ice is simply not the fun show that Champions was.)

So, I almost had to force myself to watch this year’s Grand Prix series. I still love watching skating, but it seems that a lot of the competitors are virtual strangers. No one seems to have that spark that drew us to them in years (and decades) past. 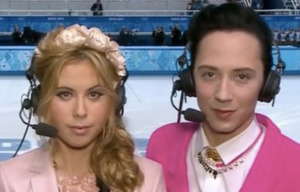 Perhaps the popular duo of Johnny and Tara can somewhat remedy that situation.

So, here are my scoops on them: I was really sick of Scott and Sandra, who are always biased, so this new team is a big improvement to me. Even though I’m not a fan of Tara, I love Johnny, personally and professionally. (More on the personal side in a minute.)  I love his basic intellect, even if every now and then he misuses a word, like saying the skater’s arms are “astute.” [Note: I guess, in a weird way, you could say that, but you’d have a lot of ‘splainin’ to do. I’m sure that was not the word he meant.]

But Tracy Wilson, who called this season’s Cup of China, is better than all of them!  She’s peaceful and calm about it, with no superfluous words, which the rest do for the sake of talking.  She hangs back, speaks low, (as it should be,) and doesn’t make it about her.  No jokes nor personal stories. She’s the perfect commentator.

I do appreciate that Johnny is pretty honest. He pointed-out that one Japanese girl “wears her shoulders as earrings,” which is horrible posture. He also said that somebody’s jumps (or something) were dreadful. And he was correct. So, good for him. He’s like an openly gay Dick Button. (But, Johnny does dial it down for his broadcast career, which is good.)

Tara is only along because Johnny brought her along. He would’ve been just as good with any other partner…especially moi!

So, speaking of both of us, here’s our connection. I met Johnny Weir several times when he was skating with Champions On Ice. He was always nice, but on one occasion, (which turned-put to be the last ever year of that tour,) I was cracking him up with some of Mr. X’s bon mots. He asked for my card, which made me happy enough to begin with. But then he called me a few days later!!! Johnny Weir called me! I could not believe it! I really wish I had been home to receive the call, and get to talk to him, but sadly I was not. And by the time I had time to call him back, I figured he wouldn’t remember, so we just never connected.

But we ran into each other at the big Macy’s fashion show here in LA a few years ago, and he was the same as ever, even though he was much more famous at that point. It was fun to see him again.

So, back to my critique of this crew. Tara Lipinski, while improving, doesn’t really bring much to the equation. She’s kind of like Johnny Weir’s little puppet. She’s the second luckiest girl in the sports world right now, right after the creepy Erin Andrews.

But, when she had to do the analysis by herself on the penultimate competition of the series, (they didn’t tell us why, but Johnny was MIA that week,) she handled it better than in tandem! I was actually sort-of impressed. (That happened to me once. I was doing a new radio show with a partner who, though being an equal host with me, was the main guy, so I hung back a bit, and let him do the heavy lifting. But when he got suddenly sick a week into the broadcasts, I had to step up to the plate and do the whole show on my own. Frightened at first, the experience gave me wings. That may be Tara’s sitch, as well.)

One thing that Mr. X actually pointed-out is: How much does Tara even know about skating?  She won once, when she was fifteen!!!  That was almost two decades ago! And she’s been out of the sport since then! So, I feel that she’s not so much of an up-to-date expert now.

And, when they appear on camera for a minute or two on each show, Tara looks like just a giant head.

SOME OTHER NEW-SEASON NOTES

I hate that those NBC broadcasts showed us just the singles competitions. They barely even mentioned the pairs and dancers!!!  Shame on them!

And they needed to bring us up to date on the first show of season.  I always feel that I’m behind in my knowledge because the broadcast team (no matter who they are each season) act like we all know what’s happened since the Spring contests! And even die-hard fans, such as I, don’t know about piddling little competitions, or coaching changes, etc.

I absolutely hate lyrics being allowed this season, in all four disciplines. (Last year, the ice dancers were allowed to use them.) It’s so distracting. I know the sport is trying to attract younger audiences, but this is crazy.  People are so moved, both ways, by music, and when you add lyrics into the mix, it’s even more swaying of opinions. If a judge dislikes someone’s voice, or the message in the song, it’s easier to hold that against the skater, without even realizing it.

And lastly, here’s a thought that occurred to me this season, (I don’t know why) that I hope is okay to share with you: Some of these girls were just really off their game in this series of competitions, and it got me to thinking of something, that I’m shocked never, ever occurred to me before! Here it is: is it possible that being a woman at that time of month could have something to do with it? I know that I could barely do my show under those monthly conditions, and I was just talking! So, shouldn’t these young ladies be affected by cramps, bloating, mood swings, etc., like the rest of us?

Great note to leave you on, eh? But I have a feeling Johnny would appreciate it.

[Note: I hope that Mirai Nagasu and Jeremy Abbott win the Nationals.]