After a two-year pandemic hiatus, the Holiday Ice Rink, (which is the city’s largest outdoor rink,) at Pershing Square, is back, big-time. And the Opening Celebration seemed to have even more joy for the guests than ever! 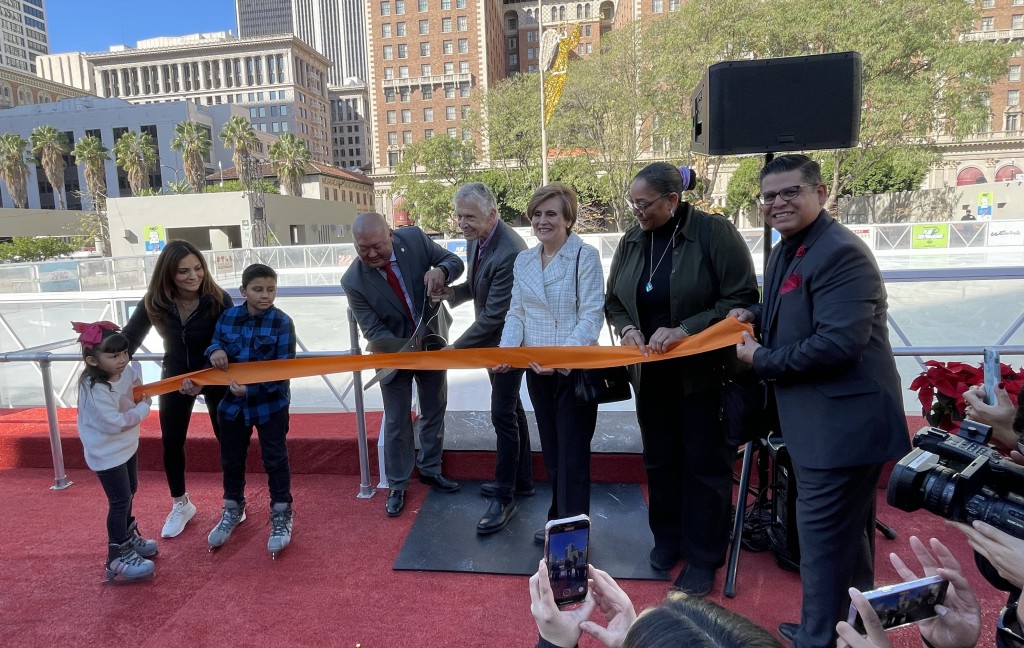 I brought two young pals with me, twelve-year-old Leon and nine-year-old Lula, because I wanted to share their perspectives with you. And I’m happy to say they loved the whole experience. So did their mom, none-of-your-business-years-old Laura.

And, of course, I did, as well, even though I was the only one in our group who passed on skating after all the presentations, luckily for everyone else on the ice!

Speaking of the presentations, a few local dignitaries gave lovely and brief speeches, interspersed with performances, both skating and singing. The program was actually perfectly-paced. 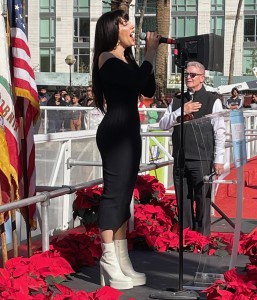 To kick it all off, the National Anthem was beautifully sung by Yvette Gonzalez-Nacer, who’s currently starring in the National Tour of Moulin Rouge. And later on, she treated us to a Katy Perry song. That girl has some pipes on her! And was rocking my usual wardrobe, previous great body, and current long straight hair with bangs. So of course I loved her! (When Mr. X saw the pix I took of her that day, he actually thought it was me at first! And then we realized he was just having a flashback.)

This was actually the third or fourth time I’ve seen her perform in person over the years, the most memorable one being her portrayal of the Wicked Witch in a holiday panto, The Wonderful Winter of Oz, three years ago. Mr. X was very impressed with her in that show because she even accompanied herself on violin at one point! He made the great observation back then that she gives the audience confidence, which she did again to open the Holiday Ice Rink. 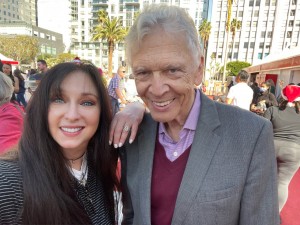 The speakers all lauded Willy Bietak, (a man I’ve known for years,) who’s been producing ice skating shows since before many of the guests were even born! The skaters all appeared courtesy of his company. He brought along three acts from LA Ice Theater: a sextet of young ladies, singles skater Elaine Chu, and a trio of one girl and two guys, (the latter duo in their tight pants, so maybe they can be in Jimmy Fallon’s popular ongoing musical skit on that topic one day!) You could tell they all loved performing on the professional-quality ice.

The event was so casual that guests were allowed to stand right up at the rink railing to watch the show. Both of my kid pals told me they loved seeing the skaters that up-close. It was really a treat for the entire assemblage.

And when the pros got off the ice, that’s when the real fun began for the kids, (and some of the grown-ups,) in attendance because…they all got to skate themselves! Leon and Lula said that was “the most fun” with Lula telling me, “It’s just my style!” I love those words.

Instead of taking my broken back out for a whirl, I took advantage of that down time for myself to finally partake of their brunch buffet! I was thrilled that in addition to the obligatory e-words, there was seasoned ground sausage and potatoes, which I actually loved. And we all appreciated that they had cute little boxed lunches for the children on the way out, which made the food portion of the event so much easier to deal with, especially because there were so many kids there this year! 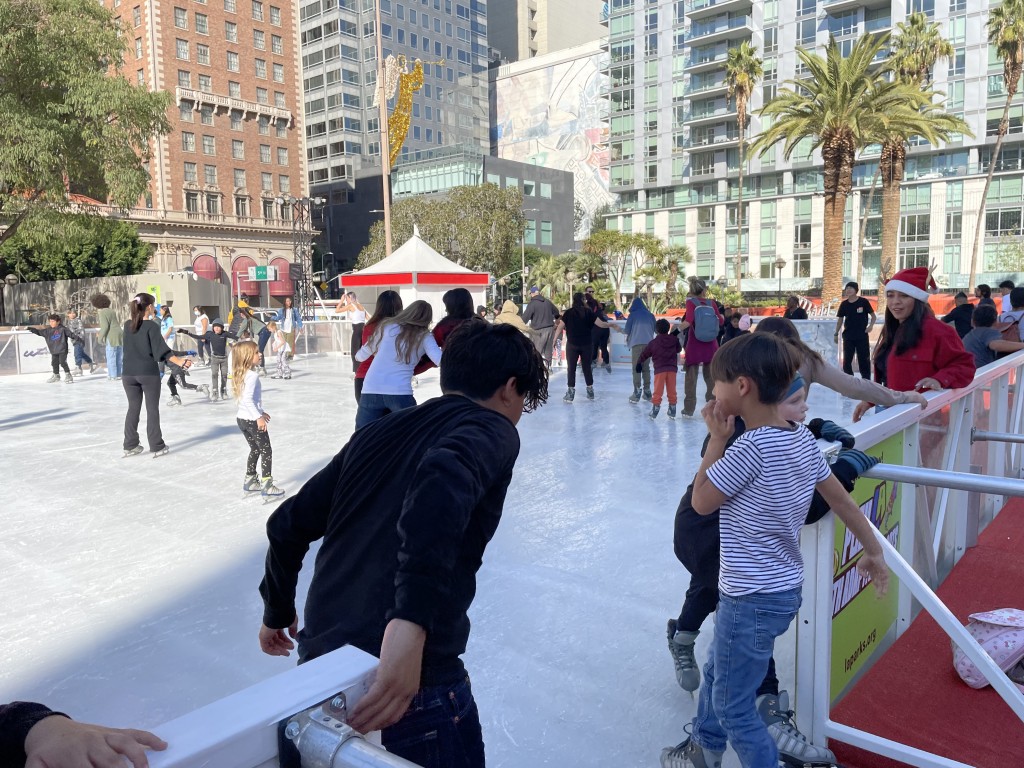 The assemblage, enjoying taking a spin on the ice. Photo by Karen Salkin.

There were actually more people, in general, than I’ve ever seen there! That all made for a really festive event; Laura deemed the whole event “amazing.”

To make sure the guests had a special commemoration of the opening, they had a company there who took black and white pix of anyone who wanted to participate, which we could then download for ourselves on-line. Part of the fun, (for me, anyway,) was getting to look at the display of everyone else’s goofy images while we waited our turn. And the nice guy in charge even encouraged every group to take multiple pictures, which is rare at events such as this one. 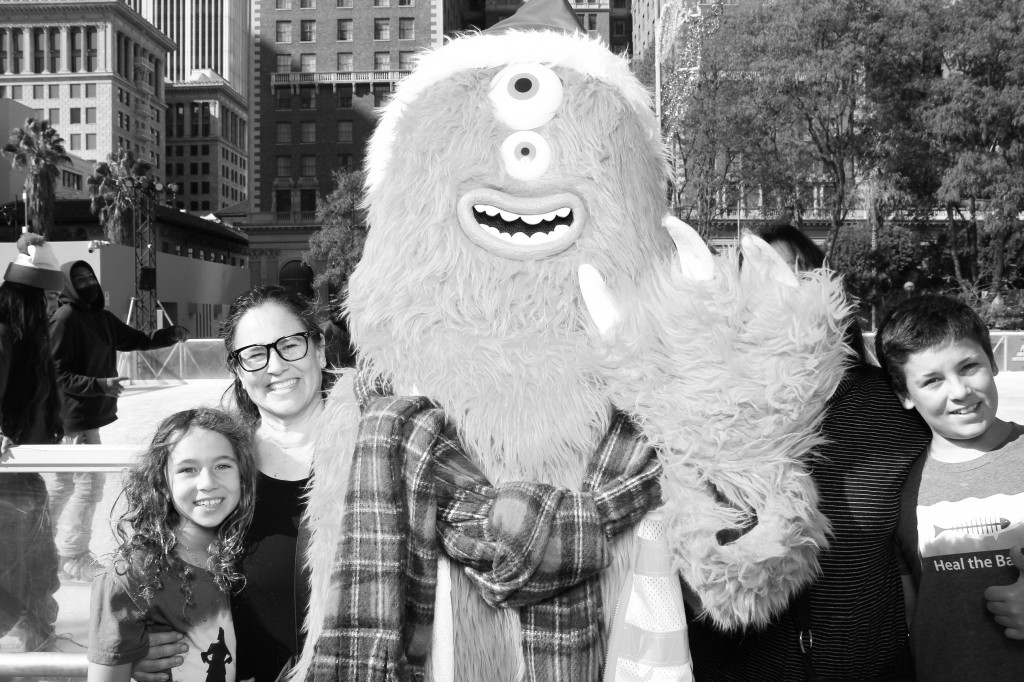 The fun on-site pix. (L-R) Lula, Laura, a nutty interloper, and Leon. But where’s Karen? Can you find her?

Now that the Holiday Ice Rink is open, in addition to just basic skating sessions throughout the day and evening, (which makes for a great romantic date, by the way, just like in almost every Hallmark holiday movie,) they have some special events planned, such as a DJ on Wednesday nights. Just check the website below for their entire line-up. 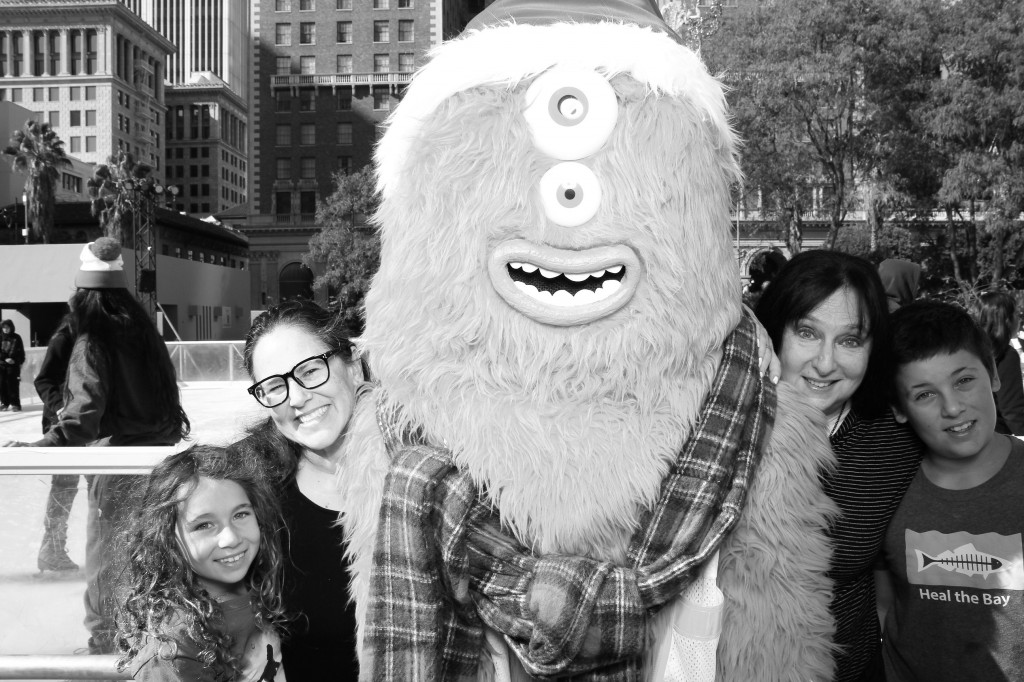 There’s Karen! Did you find her in the picture above?

As we left, Leon told me to tell all of you that “your family and friends will love it—you should definitely go!” I concur!