I was really not planning on writing about Wimbledon after only two days of the tournament, but there are so many little things to point out already that I scrapped the already-drafted column for today to share my tennis thoughts, as unimportant as they may be to most.

But, if you were ever wondering just what goes through my mind as I watch every single second of the revered tourney, this is the place to come. [Note: Please forgive me if my writing is a tad muddled today; between the tennis starting daily at my 4AM, and a situation Ive been dealing with in my own life, I’ve hardly slept for the past five days.]

Pam Shriver is just annoying on every level, but her constant mispronouncing of Petra Kvitova’s last name makes me see red.  I even tweeted at her, which I’ve never done to anyone, to beg her to stop calling her “Kfitova” already!!!

And later on, Pam said, “the influence of the Williams sisters…seems to be so influential.” Ya think?!

Vexatious (yeah, that’s right–I know how to use a thesaurus!,) female ESPN host Chris McKendry adds an “l” to the end of “draw” and “saw.”  Why doesn’t anyone correct this people???!

Serena says “ekspecially.”  What else is new?!

And so many of the commentators and players have incorrect grammar, and misuse idioms and sayings. 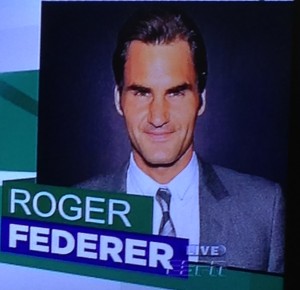 This is the promo photo that ESPN is using of Roger Federer, which is a little odd of them to do, because everyone else is in tennis garb. But it’s the best picture he’s ever taken! My mother would have loved it!

Roger Federer has the most gorgeous, and clean, hands.

I love Roger Federer so much! He’s always so honest, thoughtful, and intelligent in interviews.  And he’s one of the few who actually answers exactly what he’s asked.

Raphael Nadal will have to shave his head soon (because his hair is so sparse.)  At least Roger still has that over him!

I hate that the ESPN commentators are always so jingoistic.  Here’s a news flash—not everyone in this country is rooting for the Americans to win. Or even do well. The only American female I like is Alison Riske. I root for the people I like and respect and am a fan of, no matter from whence they came.

It looks like Serena Williams may have finally lost some weight, so good for her. But Mr. X thinks she’s had also had some facial surgery, as well. It looks like she has. I’m all for appearing one’s appearance, but she just looks weird now, especially with those tattooed eyebrows up so high on her face! You can ever see where her real ones are, down below the fake ones, which looks so odd. 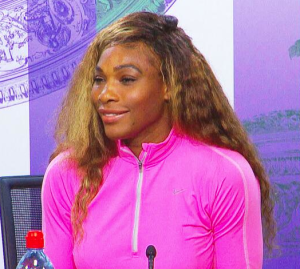 Doesn’t Serena Williams look a bit strange? And what is up with that hair?!

And why, with all of Serena’s money, would she ever go out with that hair??? Especially for an interview, days before the tourney. It’s not like she just got off the court, or was in a hurry to go out there. Get your hair done, woman!

Daniella Hantuchova has the most gorgeous skin and natural tan.

Marion Bartoli, last year’s Champion, looked really good for her. I was so happy for her to walk out on center court, even though she’s no longer playing. It was a nice touch of the Wimbledon committee. (I believe she was involved in the coin toss before the featured women’s match, but they never showed it.)

Francesca Schiavone so annoying.  I used to really like her, but her horrible two-syllable screaming, that occurs with every single point, is even more disgusting than her filthy hair. Ugh to her entire presentation. 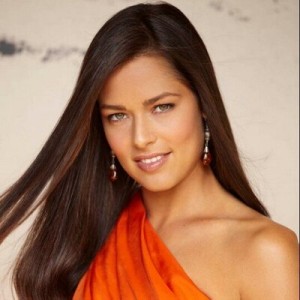 How gorgeous is Ana Ivanovic?!

Ana Ivanovic is my favorite female player.  She’s not only one of the most beautiful girls I’ve ever seen, but she’s always so sweet and nice. And the strange thing is, I’ve never heard anyone comment on her looks, ever!

Most of these girls are so far from famous.  Even I’ve barely ever heard of Simona Halep, and she’s the number three seed!

It’s so mean of the tournament organizers to make these athletes play so late in the evening.  They make them go until almost 9:30PM, and it looks almost dark by 8:30PM!  I don’t know how the players are expected to see that little ball in such low light.  It’s not fair.  I’ve seen several competitors complain, and even beg to stop playing, to now avail.  I hope they’re happy that they’re endangering the eyesight of these talented young people.  Shame on them.

And you thought this was going to be about the actual competition so far, didn’t you? Silly readers.

Okay, that’s it for now; I have to start watching Day 3 now so I can have some more fabulous observations for you soon! (If you can’t wait to read my thoughts ensemble here, you can always check-out my tweets. @MajorCelebrity.)