After yesterday’s notes on this tennis tourney, I was planning to not write any again until maybe Monday. Then I decided on every other day. But when I saw how many notes I took on just yesterday’s action, I realized I had to publish these right away. I guess I just can’t help myself where sports, and correctness in every category, are concerned. (And, of course for my linear-thinking mind, they’re in the order that they happened.) 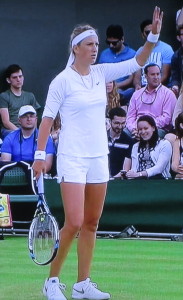 Vika Azarenka’s casual yet adorable outfit. (It looks much better in action, by the way.) Photo by Karen Salkin.

What an idiot telecast host Chris McKendry is! First thing in the morning, she said, “Andy Murray, a straight set win to open the proceedings today.” He hadn’t even played yet! She meant he had won his first match the other day, not today’s. How wrong of an anchor to misspeak and mislead, right off the top of the broadcast. At first, I though I had already missed it!!!

Messy-looking Pam Shriver said of Azarenka, “She needs a different change of underwear under her dress. Not a good look.” What a moron–it was shorts!!! She can’t tell the difference between shorts and underwear?! And this coming from a woman who didn’t wash her hair for years…and went on the air looking like that!!! (Also, “different” and “change” are synonymous; you don’t use them together.)

And actually, my favorite outfit is Victoria Azarenka’s! Her shorts and elbow-length-sleeved casual top are adorable. And who would you want to trust more on fashion: creepy Pam Shriver or been-on-the-fashion-pages-of-tabloids-as-a-“Do” me?! 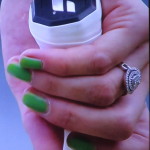 Is that ring on Caroline Wozniacki’s right hand her former engagement ring? Photo by Karen Salkin.

The commentators are not giving us enough juice on the players. I know that info is not pertinent to their on-court performances, but it keeps the casual viewer engaged.

Caroline Wozniacki lost a ton of weight following her broken engagement (to pro golfer, Rory McElroy, who broke-up with her right before the French Open in May, after the wedding invites had already gone out! You see—that’s the kind of juice I want the commentators to give us!) She looks so much better. But I’d rather be chubby and in happier circumstance. (And so I am!)

And, is that Caroline’s former engagement ring she’s wearing on her right hand? If so, interesting choice.

Why does Venus Williams always laugh at everything she says? It’s never even funny. 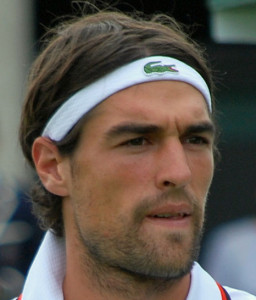 Jeremy Chardy. Can you see why I root for him?

Is it wrong that I root for Jeremy Chardy just because he’s gorgeous? And I still think so, even though he’s rocking a beard now, which I always think looks gross. (And can ESPN please give us some close-ups of the guy???)

In the Gulbis-Stakhovsky match, the commentators kept mentioning that Stakhovsky had beaten Roger Federer here last year, but they never once mentioned that Gulbis had just knocked Federer out of the French Open! That the two guys had that in common would have been an interesting fact to transmit to the viewers, dontcha think?

I never saw anyone who benefitted from make-up more than I do…until I saw Petra Kvitova’s press picture. OMG. It’s like two totally different women!!! Props to her for cleaning-up so well. 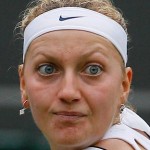 By the way, I’m so proud of Petra to be standing a bit straighter this year, with a flatter core; she has always been hunched-over with beyond a muffin top. It was more like the full muffin!

Pam Shriver shouldn’t be allowed to call Kvitova’s matches since she refuses to pronounce her name correctly. (See what I wrote about that yesterday, if you missed it: itsnotaboutme.tv/news/sports-thoughts-quick-wimbledon-notes.) Or just call her by her first name, Petra. They all call Maria , Serena, and Venus by their first names, so it would be a good idea to do so for ones whose last names they can’t pronounce. (Although, why anyone can’t pronounce “Kvitova” with the “v” is beyond me.) 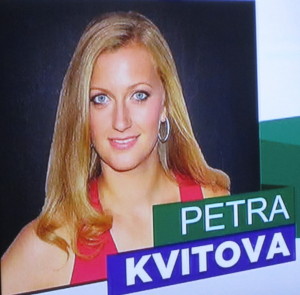 …and Petra Kvitova with make-up!!! What a difference! OMG! Photo by Karen Salkin.

The ESPN sound mixer sucks. It’s often super-hard to make-out what the commentators are saying; their voices blend too much into the background sounds, and I have to turn-on the captions way too many times.

I’m sick that Azarenka lost. And worse, her opponent, Jovanovski, should not be allowed to make that horrible two-syllable scream.  It’s jarring, to opponent and viewers alike, especially since she doesn’t do it all the time.  It’s like someone screaming to scare you!

Speaking of annoying sounds, it makes me so uncomfortable to keep hearing commentator Tom Rinaldi breathing weirdly in-between points and comments. Why don’t the ESPN technicians do something about it?

I love that British wild card, Naomi Broadly, had a great time playing there, even in a bad defeat. 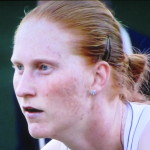 Doesn’t Belgian Alison Van Uytvanck look like something out of an Andrew Wyeth painting? I’ve never seen such a fair-skinned player in my life! I worried about her skin getting too burnt for the entire match!

OMG…Tom Rinaldi just called it “Wimbleton!” Some idiots I know do that mistake, too, but one would think that someone calling the matches there on TV would know better. I guess one would be wrong!

What kind of bitch chair umpire calls a time violation on Van Uytvanck at such a critical point in the match? The score was deuce, and Alison she was serving for the match! She was preparing to serve when all of a sudden, the umpire, (whose name I can’t find, but, being the detective I am, I will, and then I’ll report it on twitter,) called a time violation…for no reason at all! The girl wasn’t even bouncing the ball excessively! Chris Evert said, “That almost seemed unfair.” Actually, there was no “almost” about it! Not only did it change the match for the players, but it changed for whom I was rooting because, even though I’m a fan of Cibulkova, I so hate unfairness. 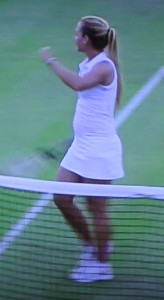 That’s Cibulkova whose stomach is sticking out, but it’s the same with so many of the other ladies. I don’t get it. Photo by Karen Salkin.

Speaking of fairness, I forgot to mention this before: Novak Djokovic did something I’ve never ever seen before. (I believe that old-timer, Mats Wilander, did it once, too, but that was way before my tennis time.) He have away a point to his opponent, and at a critical time, to boot!

What is it with so many of these girls, like Cibulkova, and their stomachs sticking out?! In that case, I could be a tennis player!

I hate when the announcers give us the wrong info, i.e. names, scores, match points, seedlings, etc.

During the nighttime Querrey-Tsonga match, the powers-that-be over there said that it was too dark to use the challenge system, so they should have just postponed the match. Yet another unfairness.

But, that made it extra exciting that the ump allowed play to continue in the dark because Querrey and Tsonga asked to keep going at 8-8 in the fifth.

If anything interesting happens on today’s Wimbledon telecast, I guess I’ll report it tomorrow.