Believe me when I tell you that I have copious notes on the past week at Wimbledon. But, this topic of what happened yesterday merits it’s own column. (The rest will be published either tomorrow or Monday.)

This is the very quick version of what happened. Serena Williams was beaten by Alize Cornet, a Frenchwomen, last week, before the quarterfinals. Her sister, Venus, had already been eliminated from the singles, as well. And Serena looked perturbed about their whole time at Wimbledon.

But they still had to play doubles. They had almost gotten beaten in the first round, but somehow prevailed, and now had to play their second round match yesterday, days after they had both been ousted from the singles tournament. 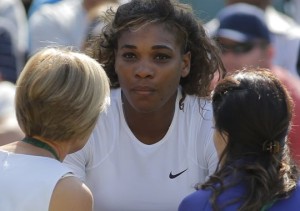 An official and a trainer talking to Serena Williams about her supposed illness at Wimbledon.

All of a sudden, during the pre-match warm-up, Serena was kind-of stumbling around, and not able to hit a serve, nor even catch a ball from a ball boy! So, someone called for a tour doctor, and the trainer, and two doctors, and an official, all came out to examine Serena, and talk to her about if she could even continue. This went on for a quarter of an hour, while their opponents sat there quiet as can be, and looking confused.

But we were all confused. Serena’s agent even came down to the court to put in her two cents to the officials. To the shock of the ESPN commentators, the Williams sisters did try to play the match. Three games were played in all, none that they won, of course. Finally, after more fuss from Serena, the match was called, and with barely even a “congratulations” to their befuddled opponents, the Williams sisters left the court. And Wimbledon.

So not only do they get to get the heck out of Dodge, but now she gets to use this supposed virus as an excuse for why she lost a few days ago!

So, first of all, I don’t believe any of this for a second. If she really was sick, it was so rude of her to keep her opponents waiting all that time while she decided if she could go on. And shame on the Wimbledon powers-that-be because they would not have given any other player that much time to decide what he or she was going to do.

But this is what I think really happened: [I even wrote this as the drama was unfolding: “I’m sure she faked it, and will then ‘be diagnosed’ with something that will ‘explain’ why she lost in singles.” Pretty psychic of me, eh?! Or am I just used to Serena’s sympathy tactics?]

I think that she just wanted to get out of there after her terrible loss, but didn’t know how to bow-out gracefully. (Does she ever?) She knew that people would be saying what a bad sport she is if she and his sister just pulled out of the doubles. So they decided that they’d go on the court, and then one of them would “get sick” so that they could leave “legitimately.” And if they say she had been sick for a few days, that would explain how she lost to someone she considers to be a lesser player than she. (I think that’s why they chose Serena to be the one to make believe she was sick; she needed the excuse for her loss more than Venus did for hers.)

But I feel that she doth protested too much. If someone really didn’t feel well, they wouldn’t be out there making a fuss for so long. If you were really that sick, you would just drop out; you wouldn’t go out on the court to try to play the actual match. But I think she just had put on that the foolish act so that people could see with their own eyes what was happening. She still never cleared-up her weak story about the mysterious stepping-on-glass incident in a German restaurant years ago, so she knew that people may not take her at her word. So she had to go on the court and put on that show for the audience and the TV cameras.

When the ESPN people tracked down her coach/boyfriend, and her hitting partner, in an attempt to get to the bottom of what was going on, the two men said they hadn’t seen her. I can understand her hitting partner not seeing her, but her boyfriend/coach claimed he hadn’t “seen her for a couple of days” before this match. Yeah, right, I’m sure that your boyfriend, (whether he was your coach are not,) or your coach, (whether he was your boyfriend or not,) would not see you for a couple of days at Wimbledon before you have a match! I think even people who don’t follow sports would not believe that one.

I really have nothing else to say on this subject. I think her behavior speaks for itself. But the good news is that we don’t have to see the Williams sisters at Wimbledon for the rest of the tournament. And in my book, that’s a victory for all us tennis fans.