ISAIAH AUSTIN AND THE 2014 NBA DRAFT

I had planned on publishing more Wimbledon notes today.  Or just taking the day off because of some outside influences.

And then, while watching the NBA Draft, I decided to change-up sports for a bit, and share my thoughts on the draft.

But all that changed when, right after the #15 guy got chosen, (more on all of them next week,) the most emotional thing happened.   I swear, I literally haven’t cried this much or hard since I lost my beloved little mother.  I could not calm down.  And I definitely could not watch any more of the draft with happiness.  (I feel terrible for whichever guy got drafted next, after the event I’m here to tell you about now.) [Note: I’m still crying, just as hard, the next morning. I don’t know how anyway could not be.] 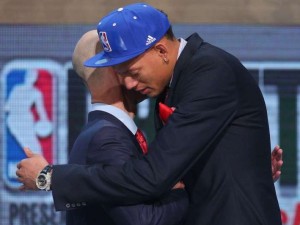 On Sunday, while surfing the web, I saw news that stopped me in my tracks.  Isaiah Austin, my favorite college basketball player, who was due to be drafted into the NBA last night, had just been diagnosed with Marfan Syndrome, (look it up,) and therefore, had to give up his pro basketball career before it even began. And this after achieving a successful college career despite having a prosthetic right eye due to suffering a detached retina in it when he was a kid. He had already fought through that adversity, (which included multiple operations to try to repair it,) and played on, without even telling anyone but those closest to him! He appears to be a person of acceptance, and not one for excuses. [Note: I still don’t see how anyone can play high level basketball with just one eye. Just close one eye and try it yourself, and you’ll see how difficult that would be.]

So, back to the NBA draft. I was trying to be happy for all the other guys who were being drafted into professional teams, and put my sadness for this lovely young man in the back, rather than the front, of my mind.  One good guy, Marcus Smart, referenced Isaiah in his on-air interview, which I really appreciated.

Then, right after the #15 pick, (Adreian Payne, another wonderful guy who has an emotional story of his own, that I’ll tell you about on Monday,) the NBA did the greatest thing ever. 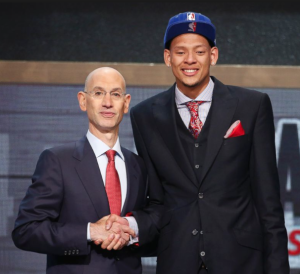 Isaiah Austin ( on the left) with NBA Commissioner Adam Silver.

Commissioner Adam Silver brought Isaiah Austin up to the stage, the same way it would have been done if he had been drafted, by saying, “…the NBA drafts Isaiah Austin…,” (or whatever the official line is; I can’t bear to go back and watch it again to get the exact wording,) so Isaiah could have the feeling of putting on a cap, walking up to the stage, (to a standing ovation by the entire Barclays Center assemblage, I was happy to see,) and shaking hands with Commissioner Silver.  Isaiah spoke brilliantly, and then the head ESPN telecast commentator told us that Baylor University, for whom Isaiah played, had invited him back to finish his education, (I’m assuming on them,) and to work on Coach Scott Drew’s staff.

As reported by nba.com, Isaiah said in an on-site interview, “Just being around all the draftees and seeing my friends get drafted, it just brings joy in my heart because I know how hard we work to get to this point.” How truly amazing is this kid?! Can you understand why he was already my favorite?

As much as I’m giving props to Isaiah for his perennial excellent behavior and demeanor, I’m giving equal kudos to the NBA for doing this, not only for Isaiah Austin himself, and his family and friends, but for all of us. The person who thought of this generous act is a kind-hearted genius, in my opinion. It must have been a woman.  And a mother. Whomever it was, I think all basketball, and humanity, fans are grateful.

I have a feeling that this kid will go on to do great things, possibly even in a capacity with the NBA itself (or a team,) and I just know it will make an excellent film someday. I’d love to be the one making it, but I have a feeling there’s a long queue for others who are thinking the same thing.

To end on a shallow note, (because I’m still me,) Isaiah was also the best dressed guy there! And I guess that’s the way it should be.