Between watching every second of Wimbledon, dealing with problems in New York, and crying over Isaiah Austin’s raw deal in life, I haven’t had time to share my thoughts on this year’s NBA draft. But it was just a few days ago, so it’s not too late.

[Note #1: This is what I’m talking about: It was a tad hard for me to watch because my favorite college player, Isaiah Austin had just received news that he has Marfan Syndrome and therefore can not be drafted. (Not because he wouldn’t be good enough, but because it would be a danger to his health.) If you missed what happened in regards to him at the draft, you can read it here: itsnotaboutme.tv/news/sports-thoughts-isaiah-austin-and-the-2014-nba-draft.] 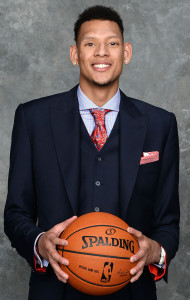 I’m sorry to say that my observations go up to only pick #15 because that’s when they honored Isaiah, and I was so emotional that I had to stop watching. I still have the entire five hours on my DVR, and I really wanted to watch the whole shebang before I published this, but I just can’t bring myself to do it yet due to Isaiah’s painful situation. So, the below will have to suffice for now. And, of course, I jotted my thoughts down in the order that they happened.

As usual, I had watched every second of March Madness this year, but I barely remember many of these guys.

Analyst Jay Bilas looks so much better now, with almost no hair, than when he was younger!

The draft took place at Brooklyn’s relatively new Barclays Center. It’s almost been there, done that, for me. (Meaning–being bi-coastal, I’ve driven by there many a time, but never went in.)

Despite what the buzz is in the sports world, I predict that LeBron James, who just became a free agent, will not go to Cleveland.  I can’t even believe that anybody thinks that he will!  (I’ll try to write a column backing up my theory in the near future.)

I’m not a fan of several of the commentators/analysts, which made the proceedings sometimes hard to watch in-between draft picks.

Little panel member Bill Simmons is growing on me, though. I couldn’t take him a month ago, but possibly his baby blues got to me.

Cleveland must think Canada is the same thing because they both begin with “C,” because they keep drafting Canadians. 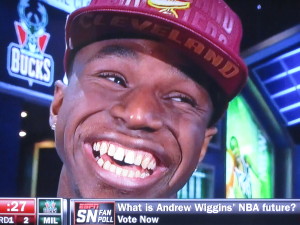 I really like this guy, but I’m so happy that now #1 draft pick Andrew Wiggins can get braces. Photo by Karen Salkin, of course! (Who else would take a snap like this?)

I’m happy for #1 draft pick Andrew Wiggins. What a feeling for all these guys.

Now Wiggins can afford braces and teeth whitener. Yay. I hope he’s as excited about those prospects as I am!

Why are they all wearing horrible suits?

I can’t believe the interviewer actually basically did “what are you wearing” with the players!!! And Wiggins was prepared with answers of exactly what company every aspect of his attire was from!

I don’t mind interviewer Heather Cox that much, but her nasality is so annoying.  How can someone who talks like that be an announcer?!

I like #2 pick Jabari Parker. He’s cute and well-spoken, for the most part. But he did say, “Me and …,” which is so illiterate. My recent college intern used to say it, too, until I corrected her.

Just exactly who is teaching the children nowadays???

I loved that Jabari said, “I’m honored for a team to pick me.” How nice and aware.

Aaron Gordon wore a good blue suit. He looked like a real man. 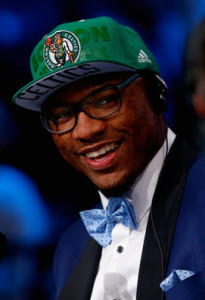 Marcus Smart, who got drated by the Boston Celtics.

Now Marcus Smart is my favorite player for mentioning what Isaiah Austin is going through. He made me cry hysterically.

At first, I was so happy for Julius Randle to be drafted #7, but I hate the Lakers, so it was a tad disappointing for me. (OMG–While I was writing that last sentence, Bill Simmons said, “I really like Randle, and I don’t like the Lakers, so I’m disappointed right now.”  I told you he was growing on me!)

But a second later, I went, “Ew,” because then I was happy that Julius went to the Lakers because he’ll fit right in! Here’s why: When asked if he thought he’d go higher, Julius defiantly answered, “But, you know, the teams that passed on me will regret it.”  Yellow card to him for that.  (I threw that in just so you guys know that I do watch a bit of World Cup, too.) He should have said that he was a tad disappointed, but the other six guys who went before he did were quality players, so he’s just grateful to get in now. So, no problem for me–I can continue to root against the Lakers! (When he heard Julius’ interview, Mr. X sarcastically said, “It looks like they picked-up a quality guy.”) [Note #2: Contrast Julius’ interview with that of Marcus Smart, and later, Adreian Payne and Isaiah Austin, and you’ll see what we mean.]

I’m happy for both Nik Stauskas (who went eighth,) and the Sacramento Kings. Good mutual pick. But that suit!  Oysh.

Oh no! Bill Simmons just said, “Him and Al Jefferson together…” I’m so disappointed. I thought at least he would be literate! 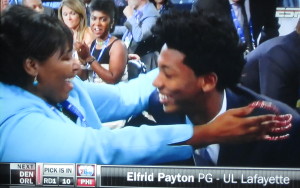 I love Elfrid Payton’s beautiful face, but not his mother’s nails! Photo by Karen Salkin.

How beautifully angelic is Elfrid Payton’s face? I now love him, but his dad is the image of Tyler Perry, and his mom’s nails are disgusting.

Stupid question to Doug McDermott: “Finish this sentence…’By the end of your career, Doug McDermott will be what?'”  And with just a beat of thinking, Doug nicely said, “…an NBA champion.” Great answer! I mean it. 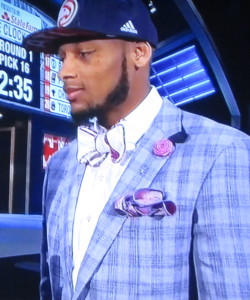 I have always loved Adreian Payne! I’m so glad he went fifteenth, especially since he was one of the twenty players the NBA invited to be in attendance. And he seemed so grateful, which, of course, I love. [Note #3: In case you’re not familiar with him, he’s the one who befriended a little girl with cancer.] The host of the show said of him, ‘You’re not only getting a terrific player, but your also getting a class man, as well.” Adreian’s the only one they said that about. He’s such a good person that I’m not even going to rag on his horrible ensemble.

After that bit of emotion for us all, is when the NBA did the greatest thing ever. That was making a tiny part of Isaiah austin’s NBA dream come true by calling him up, as though he had, indeed, been drafted. I can’t go through it again, so here’s a reminder that if you missed it, you can read the details here: itsnotaboutme.tv/news/sports-thoughts-isaiah-austin-and-the-2014-nba-draft.

And that’s as far as I got in the 2014 draft. I’m so sorry. But I just could not continue after that kindness to Austin. I feel awful for whomever came next, because he had to follow that, so I will check-out the entire draft soon. I wish them all, except for Randle, the best of luck next season, and may the best men win.