Trending
You are at:Home»SPECIAL DAYS»SPECIAL DAY: MY ZILLIONTH ANNIVERSARY WITH LOS ANGELES!
By Karen Salkin on July 27, 2022 · SPECIAL DAYS

MY ZILLIONTH ANNIVERSARY WITH LOS ANGELES!

Yes, ladies and gents, it is that time of year again. The anniversary of that fateful day I arrived at the doorstep of my friend Mitchell Gottlieb in Westwood Village, Los Angeles! And never left. (The city, not his doorstep.) 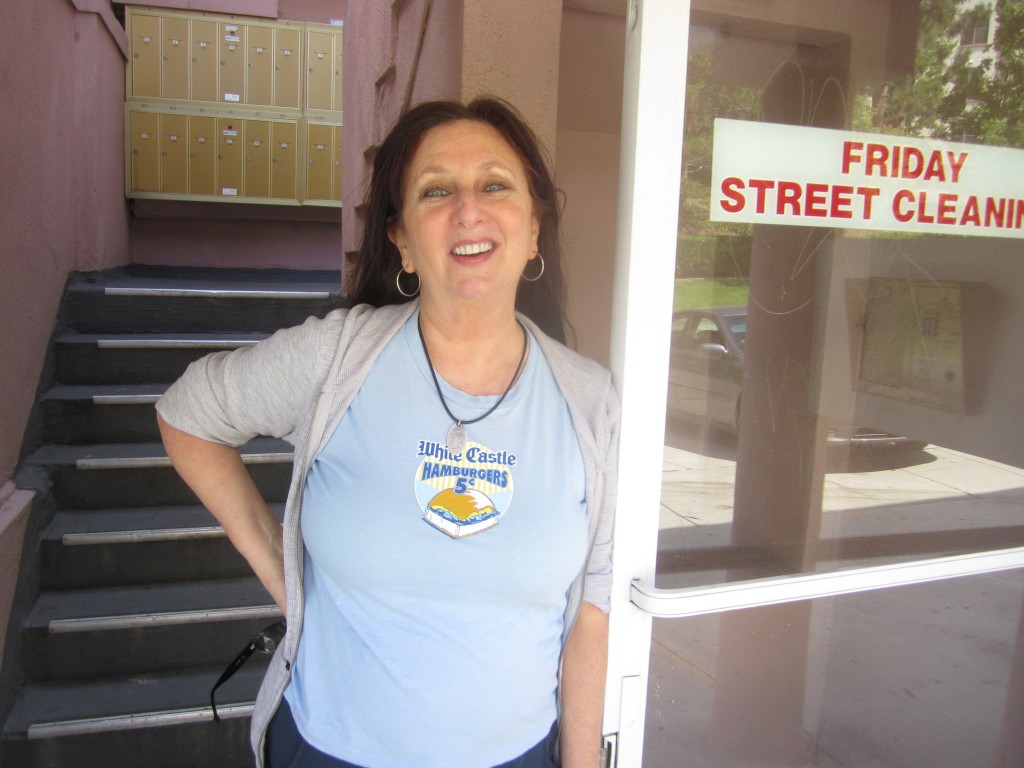 Karen Salkin, on one of her recent anniversary visits to the first place she stayed in Los Angeles. Photo by Mr. X.

I thought I had nothing new to say about the occasion, since I’ve been celebrating it in writing, talking, and real life for every year since, but as I typed that first paragraph, I realized that I never told you the whole dramedy, so I’ll do that now. Not just for it to be about me, (which the title of this e-zine clearly states that it is not,) but so that everyone, especially my young readers, sees that the biggest things in life can come from some obscure and very tiny seed.

[Note: After I wrote this article, I discovered that I had shared much of the story in one of my YouTube videos! Not all the background that I’m including here, but it might be fun to see and hear me tell the tale, visually and verbally, like I used to do on my TV show. (But much, much shorter!) You can watch it here: www.youtube.com/watch?v=_gtPybsO6VE. 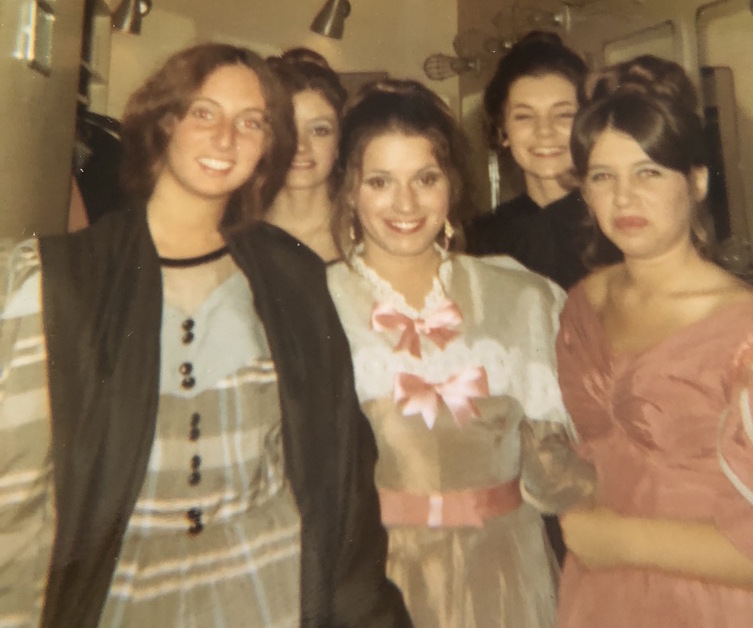 Karen Salkin on the left, in her very first stage performance in LA, on her FIFTH night in town!!!

Mitchell and I knew each other a tiny bit since kindergarten in Brooklyn! And then a bit more in high school, because he played in our grade’s band when I was the choreographer of the yearly show.

And then, in my first college, (yes, I did attend multiple ones,) he was the favorite student of my set design professor, with whom I had become very friendly. So Mitch and I wound-up being better pals than in the past.

And one day, I believe it was backstage, he asked what I was doing for the summer. When I said going cross-country with some friends, (which is a crazy story in itself,) he told me that he and his friend Roger (whom I also knew) were doing a theatre workshop at UCLA, and gave me their address there. (Nobody had cell phones in those days, and kids didn’t usually get landline numbers for just two months in the summer if they were away from home. I have no idea how we got anything done back then!!!) He told me to visit when I made it to LA. 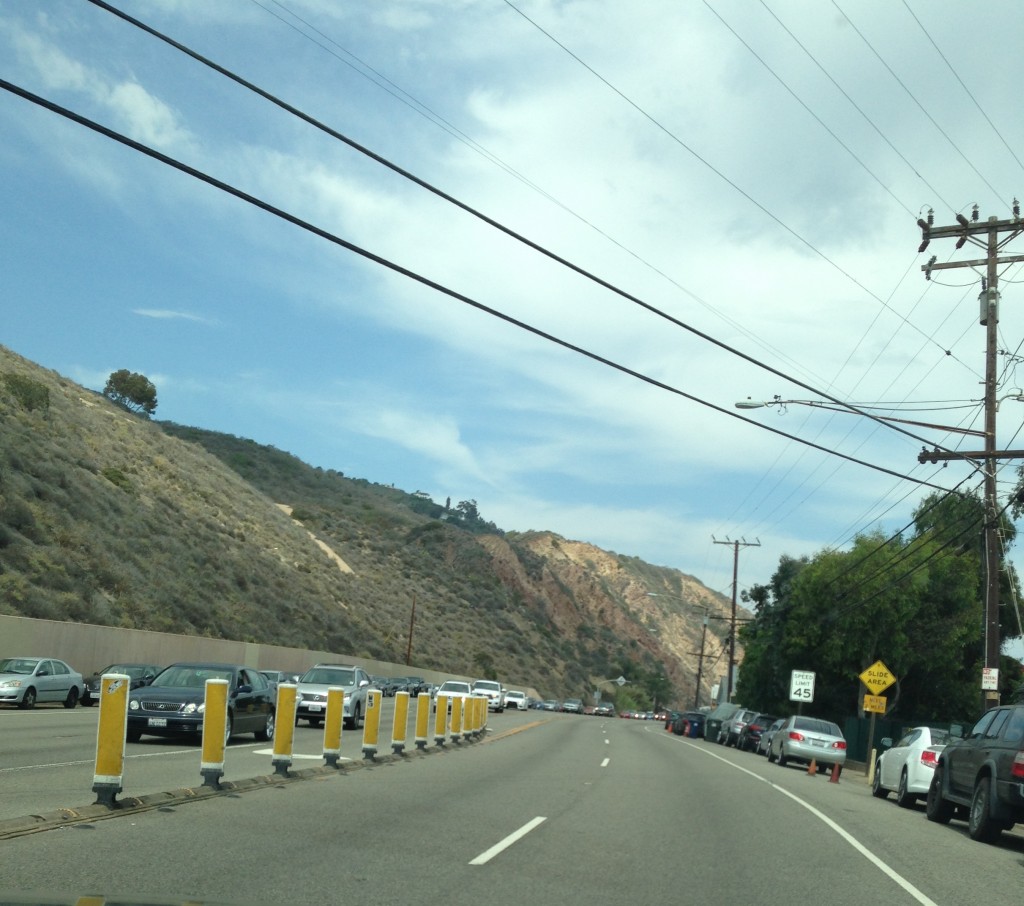 A recent trip down PCH to celebrate my anniversary here. Photo by Karen Salkin, as is the one at the top of the page.

But everyone says stuff like that, especially teen-agers. I’m sure he didn’t expect to really see me, nor I to actually be there.

But maybe I did. I never said things I didn’t mean, so I didn’t expect others to, either. (And none of that has changed.)

I also didn’t expect to wind-up in Los Angeles all alone. I was due to see the country with my college buddy, Allan, and his older cousin, Mark. So when Mark showed-up at my parents’ house in Brooklyn to pick me up alone, I was a bit taken aback. I asked where Allan was, and he said, “He’s meeting us there.” “There” turned-out to be…in California! Not the “around the block” it sounded like.

So here I was, off to Cali with someone I had known about a week! I wish my mother was still here for me to apologize to right now, (which this writing is making me realize, after all these years, that I really need to!) 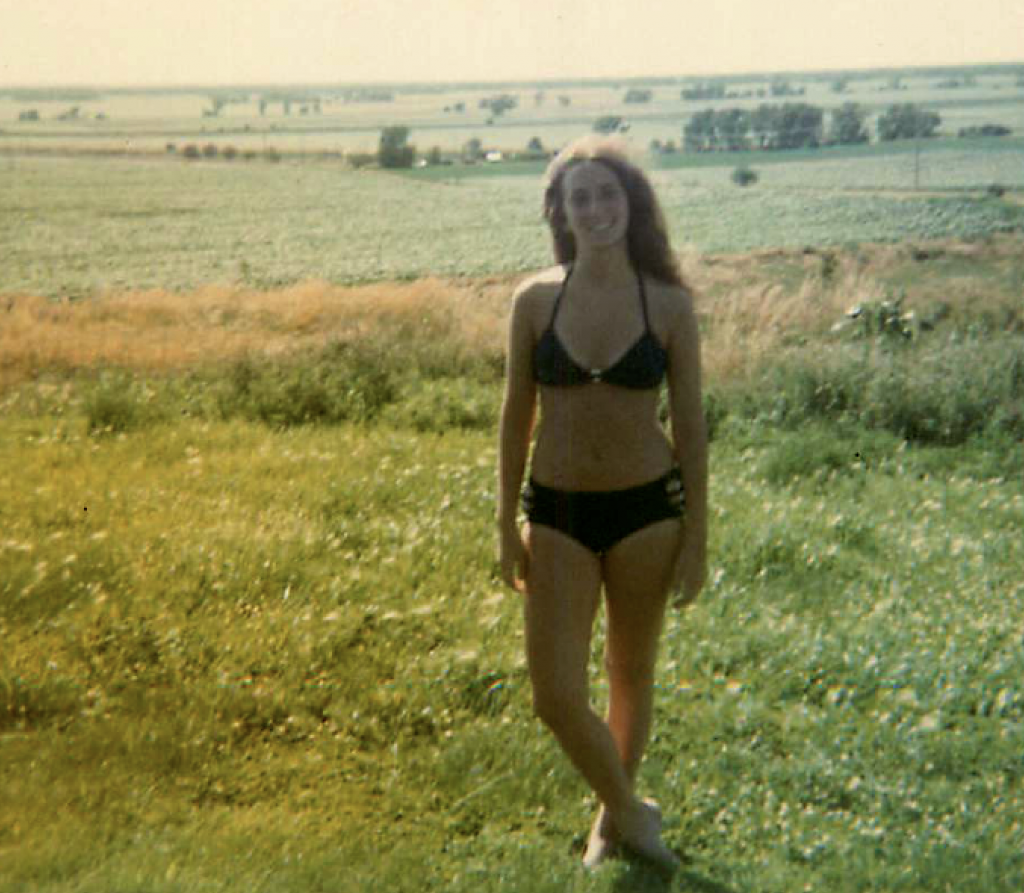 My teen-age self in a cornfield in Nebraska, on the way out to Cali. Photo by Mark something.

But, by the middle of the country, Mark had rubbed me the wrong way, so when we got to California, I had him drop me off up north in Sausalito. I have no idea how that decision came about, because the only person he knew in the whole state was down in LA, but all of a sudden, there I was, a stranger in a strange land. A high school acquaintance, Amy, had given me the address of her brother up there, and told me she’d meet me there soon. So, there I was, with a quartet of strangers, staying until Amy could show up. (My video explains that questionable arrival. Here’s that link again: www.youtube.com/watch?v=_gtPybsO6VE.)

After a way-too-long period of time up there, the siblings’ parents, (who had arrived a few days prior, and had slept on the bare living room floor with me—another story for another time,) dropped Amy, her friend, and me in Big Sur, and the girls found me a ride to LA. 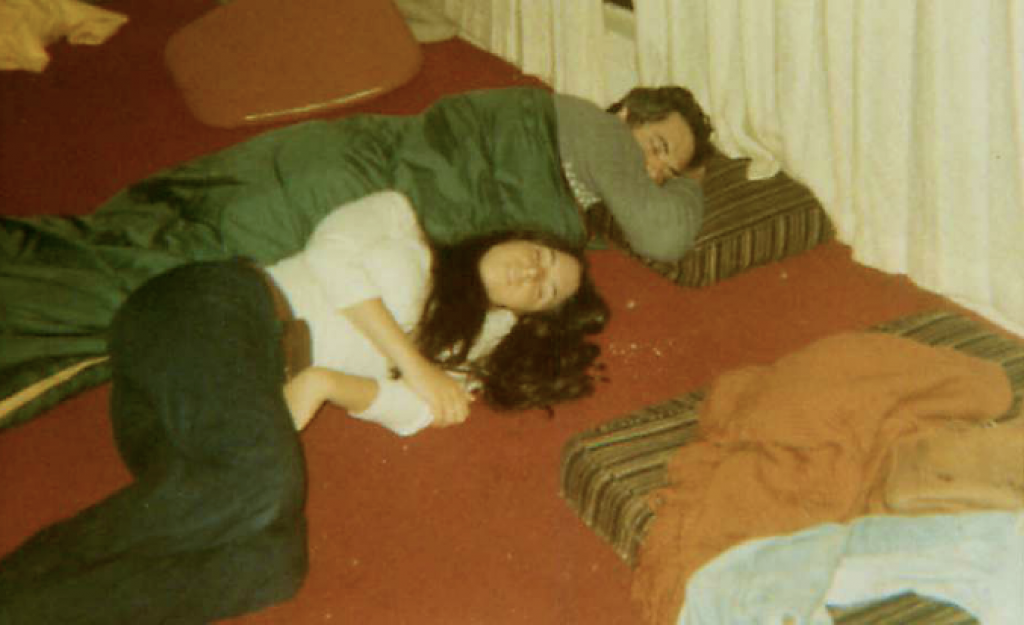 Amy and her father sleeping on the floor of her brother’s house, along with about five more of us!!! Photo by Karen Salkin.

Everyone had told me I’d hate the place, and I was really homesick for everything I had in Brooklyn, so I expected to last about five days here. But as the trio of kind strangers and I came down the coast into the Malibu area, it was the best feeling of my life! (Again, the video explains it all.) 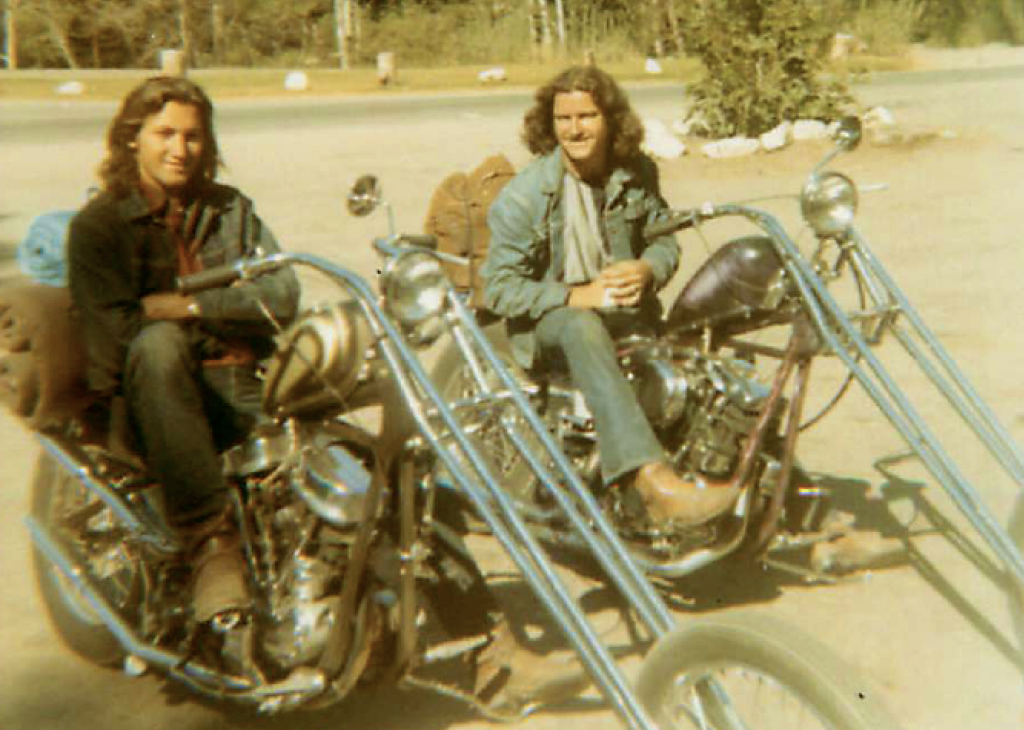 Two gorgeous guys I met in Big Sur who asked to take me to LA. But I chose to go with three less-dangerous strangers, in a car, instead. (But I did keep in touch with these two for awhile.) Photo by Karen Salkin.

In quick enough time, I arrived on Mitch and Roger’s couch in Westwood, even though they weren’t there themselves! A neighbor had let me in, and they were quite surprised to find me there when they got home from their backstage duties.

Here’s where I must tell you—my entire life, I had never gone anywhere alone. I repeat—anywhere!!! I had to “call for” my four-houses-down friend, Carol Rampino, just to go to the corner grocery store!!! God forbid Morris, the grocer, or Sid, the produce man, would think I had no friends!

Back to my LA tale: I wound-up having a super-fun whirlwind few days in West LA, which would have been a very distant memory by now had I returned to Brooklyn back then, as was the plan. But by then, I had seen Mr. X in a play, fell instantly in love, made his acquaintance, and dated him a bit. 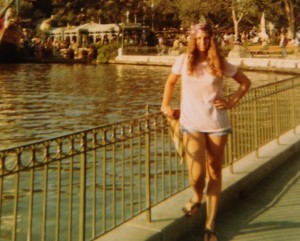 Me in Disneyland, the day that changed my life, (for the better.) Photo by Krishna.

But all that was still not enough to keep me here. And then, about ten days into my LA stay, with about five more to go, Krishna, the guy next door to Mitch, offered to take me to Disneyland. And one tiny conversation with him along the way changed everything.

When I told him it would all seem like a dream to me when I got back to my real life in Brooklyn, he asked me why I had to leave. When I told him because of my family, school, friends, and boyfriend, he explained that all away for me. (His words are all repeated exactly in the video.) 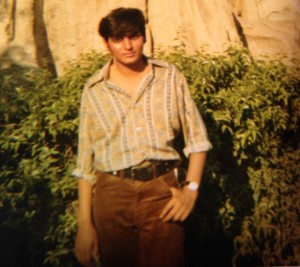 Krishna, the guy whose supreme wisdom changed my life!!! Photo by Karen Salkin.

And, because he seemed so wise, (he was from India, after all,) I did it! I stayed in LA! As a teen-ager! With no family, college, or money here!!!

And look how wonderfully that worked-out for me! (Knock on wood.) I’ve had (mostly) the best time through all these decades. I cannot even imagine what my life would have been like had I moved back to Brooklyn. It might have been okay, but it surely would not have resulted in my having my own well-received TV show for two decades, and living out sooooo many dreams, like opening for the Temptations and Four Tops, having many acting jobs, writing for People (and, in a synergistic twist, just a few years after they had featured a story on me!,) and most of all, being a guest on The Tonight Show! (More than once, I might add.)

And, of course, you would not be reading this because I would not have a successful e-zine!

So, that’s my tale of why I celebrate my Anniversary with LA every single year since coming here. And I always will. 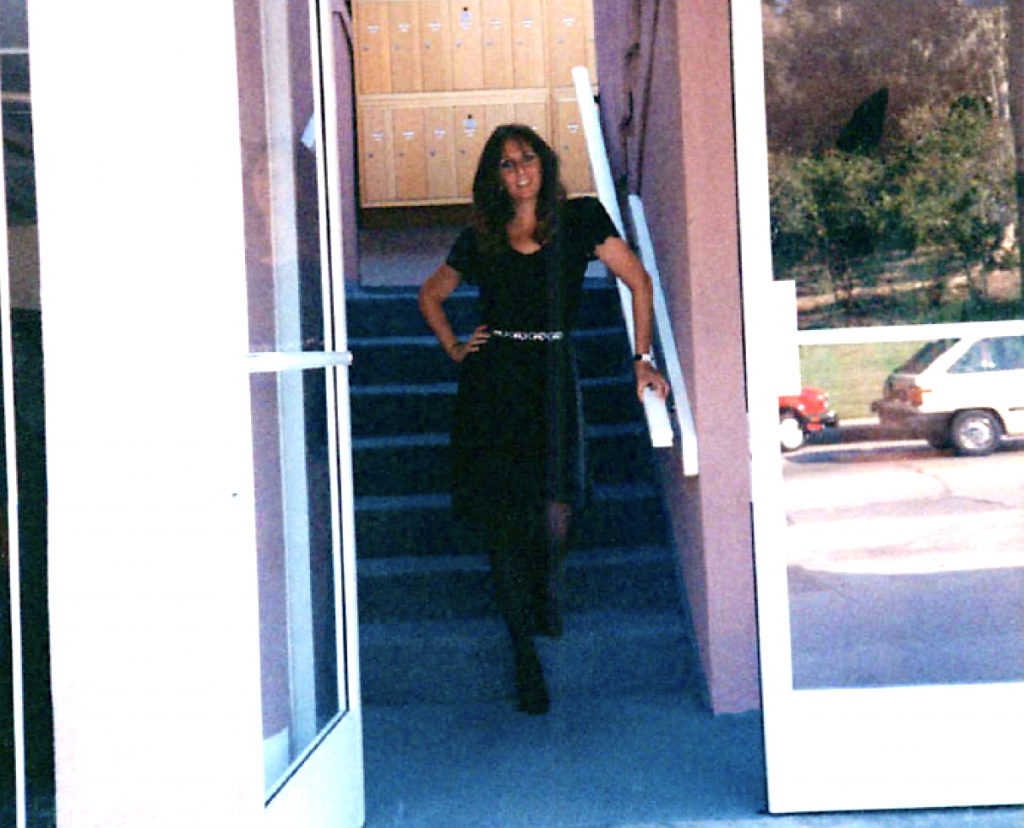 One of my previous anniverseries with LA, celebrating with a visit to my old beloved digs in Westwood. Photo by Mr. X.

I can’t write anymore right now because I have to get ready for my annual anniversary trip up and down the coast, while making believe it’s that fateful day from so long ago. I always appreciate Los Angeles, but none more than July 27th each year.

Don’t forget to watch the video for other fun deets: www.youtube.com/watch?v=_gtPybsO6VE.

And Happy Anniversary to LA and ME!!!