Trending
You are at:Home»NEW YORK»NEW YORK: OUT AND ABOUT IN THE HAMPTONS
By Karen Salkin on September 26, 2009 · NEW YORK

OUT AND ABOUT IN THE HAMPTONS

All my buddies know that going with me for an evening means at least two events, usually three. Even the youngest pals protest that it’s too much. But my Hamptons hostess, Lauren Bennett, put me to shame with her crazy schedule. I can’t believe how much we crammed into fifty-two hours, especially in the brutal heat. Here’s a brief sampling: 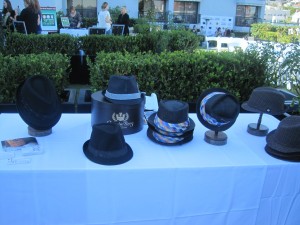 This was held on the grounds of the Hamptons’ supreme party venue, Nova’s Ark. Nova is a super-creative artist and he needs this many acres to house his sculptures and giant paintings. The man does nothing small. His fabulous mate, Tundra, had given us a personal tour last summer, which was the highlight of that visit.

For the Orphans International fund-raiser, we were ushered into the soiree flanked by percussionists, which put us in a party mood right off the bat. There was an interesting silent auction, fabulous goodie bags, and sumptuous passed hors d’oeuvres, catered by Creative Cuisine.

Bobby Zarin of Zarin Fabrics introduced me to the caterer, Howie Goldstein, and he couldn’t have been nicer or more accommodating. He immediately told one of the servers to bring us more food right away. Most caterers are too wrapped-up in the party to be personable or caring, so Howie was a breath of fresh air, which is hard to find in the Hamptons, in all ways! The food was delicious, too. Lauren was especially enamored of the lamb chops, which are usually hard to make work as an hors d’oeuvres, so they were an especially good surprise.

While we’re on the subject of fabulous food, I must laud Chefs and Champagne, a spectacular foodie event, put on by the James Beard Foundation. This was so well done that I’m jealous we don’t have one in L.A., though after someone in power here reads this, I’m sure we will!

It was held in one humongous tent and featured about seventy-five chefs from all over NY. Each one cooked-up just one or two of their signature dishes. As with most events in the Hamptons, this was all you could eat or drink with the price of admission.

It was all so well done, including the luxury port-a-pottys, that I don’t want to single out one chef. But trust me, I wasn’t ready to go when the-boss-of-me for the week-end said it was time to go to the next event. Until I found out it was hosted by the Kennedys! Read on.

This cocktail party was something out of a movie! It was held on the stunning lake-front East Hamptons property of socialite Courtney Sale Ross and hosted by Ethel Kennedy and her daughters Kerry and Rory. I got to meet a Kennedy!!! I don’t know if you can really understand how magical that is. I really felt like I was in a dream.

Ethel was absolutely lovely. To everyone! And she’s not even a blood Kennedy. Kerry spoke at length about her dad’s dream of a peaceful and just world and about his foundation’s work to empower the oppressed, build our next generation of leaders, and tackle the toughest problems facing our civilization. She was regal.

Harry Belafonte was there, as well. It was a very intimate function, so they were all up-close and personal. I was truly in awe.

The family is hosting several functions around the country in the next few months, so you all may have the opportunity to experience the power of this amazing clan for yourself.

One personal story: I had done a small part in a film with Alec Baldwin a few years back, and found him to be a wonderful, caring guy. When I tried to tell him that at this party, I found him to be much less so. I was kind-of crushed, like when I met Michael Jordan and found him to not be the super-hero I had imagined, but I’m chalking it up to the heat of the Hamptons. I know that I’m not my best when I’m hot, so I’m cutting the guy some slack. I still think he’s a riot as an actor, though.

How to portray Super Saturday to the masses? It can’t be done. But I’ll try anyway. It’s yet another charity event on the grounds of Nova’s Ark. (The best thing about the Hamptons in general, is that most events are for charity.)

This time it benefits ovarian cancer research and is held in a phalanx of tents and canopied areas on the property. It features classy cuisine, spa services, and very expensive merchandise to purchase. The $450-650 entrance fee covers all the food and activities, including shopping for designer clothing and such at greatly reduced prices.

I spent most of my time at the lunch and dessert tents because I didn’t realize there were services. I was just finding that out when it was time to move on to Polo. Now I’m planning my whole summer 2009 around getting back to Super Saturday and doing it right!!!

Polo in the Hamptons is a far cry from Polo at Will Rogers Park in L.A. On the west coast, it’s actually about watching the sport and supporting the players. There, it’s an excuse for yet another fabulous function. No one’s complaining, though, especially since all proceeds go to the South Fork Breast Health Coalition.

There’s a small VIP tent and a giant one for the hoi polloi, but both with the same catering and libations, so everyone’s happy. And there’re always fun activities. This year, it was children’s day, which was perfect for one as immature as I!

We got temporary tats, got to color gift bags and sneakers, (good thing my feet are so small!), have our caricatures drawn, (weirdly, on Kids Day, the artist made mine all about my chest!) and eat mini-burgers. All while the poor equestrians and equines were working their tails off in the heat. But I think we all were content with our lot. Except maybe the horses!

We had started the week-end off with a little reception at the Southampton Historical Museum. It was to celebrate local farmers and their produce. Since we had just stopped by on the way to dinner at Kobe Beach Club, the fabulous new steak place from the China Grill Group, I was content to just munch away on the addicting cheese and tomato appetizers.

But when the chef, Mary Spellman, who used to helm an eatery here in Malibu, heard I was visiting, she insisted on serving me a “small sampling” of the dinner she was preparing for the gathering.

It turned out to be full portions and it was so delicious that I couldn’t stop myself! It really all did taste as farm-fresh as it was billed to be. I spent the rest of the evening wondering how we could get Mary back to this coast!

What better way to spend a rainy Sunday afternoon in the Hamptons than to meet the eccentric designer Betsey Johnson? She and the event sure added a splash of color to an otherwise gray day.

The occasion was the launch of her eyewear line at Gruen Eyes in East Hampton. It was small, but packed. The set-up was really pretty with pink cupcakes and liqueur being passed, and giant lollipops on the way out.

When someone asked to snap some pix of divas, I donned one of Betsey’s glasses from the shelf. She looked at me, and said, “Oh, I love those! Where’d you get them?” So I pointed to the side, and replied, “From there–they’re YOURS!!!” She was so happy that she had admired her own design!

It was kind-of like when I see myself in a mirror, from afar, and think, “Who does that bitch think she is?!” then I realize it’s me and know that I’m looking good. I guess us nutty chicks just have to stick together.