What a lovely time my friends Sheila and Manny and I had at Russian Samovar in New York City recently. This eatery is a gem that is hidden in plain sight, right in the Theatre District! 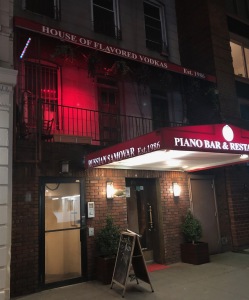 The exterior of Russian Samovar. Photo by Karen Salkin, as is the big one at the top of this page.

The food was delish, the service impeccable, and the ambiance totally authentic. Sheila pointed-out that last note because of the big number of Russian diners that night. When people from any country flock to a restaurant that serves their native cuisine, you know that it’s being done right! (That’s why I’m an expert on hot dog and pizza places—those are foods native to my Brooklyn!)

Also contributing to the very happy, convivial atmosphere is all the Russian art on the walls, and the piano playing and singing all night by Alexander Isbitzer, who’s there every Monday. (I was told they have “a variety of acts” on other nights. We even saw a dinner guest get up and play for awhile, but you’d have to check with the manager when you go, if the spirit so moves you to perform for a bit. And please remember to tip the musician if you enjoyed his or her tunes!)

Alexander Isbitzer doing the honors at the piano. Photo by Karen Salkin.

And we were lucky enough to have the amiable Maria and Aiym as our servers. They’re both really Russian, so they’re able to explain every nuance of the menu, which they did for us that evening.

Manny joked that there’s “a red room and the green room,” because of the colors of the lampshades—red in the dining room, green in the bar area. Those hues, combined with the soft lighting, make Russian Samovar perfect for the holidays. 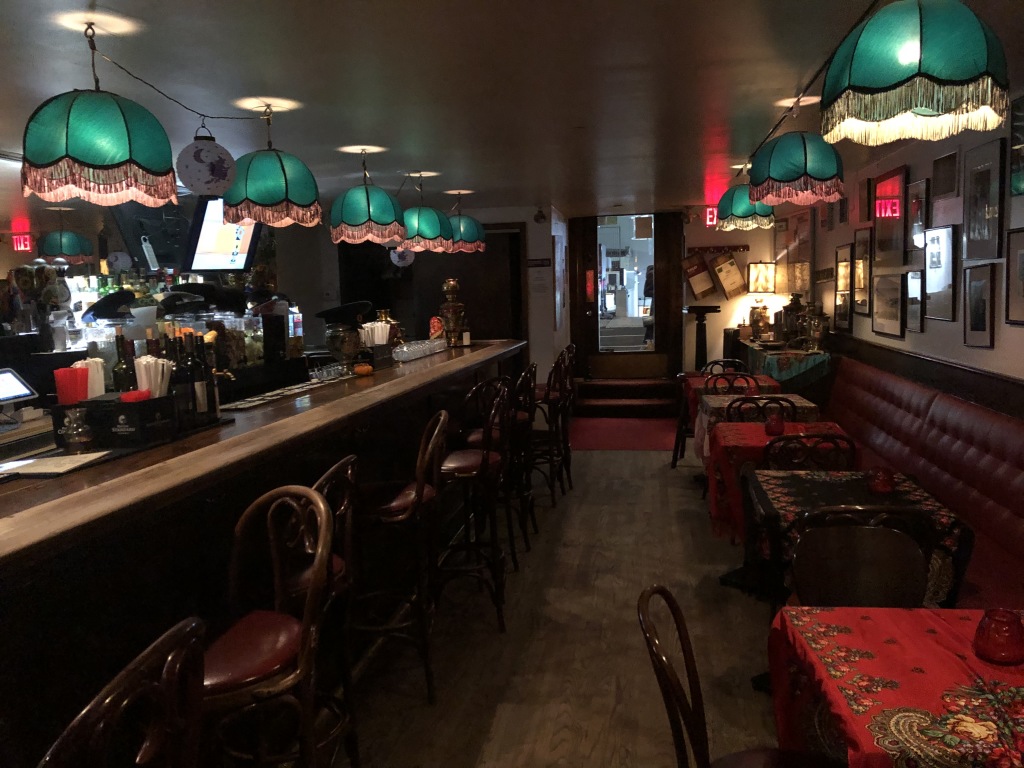 Many of you will be happy to know that they’re famous for their infused vodkas, which come in a wide range of interesting flavors, along with their many original cocktails. Sheila had the Baba Yaga, which is made with infused horseradish vodka and apple brandy, and she said, “It has some bite!,” and jokingly added, “It will put hair on your chest.” 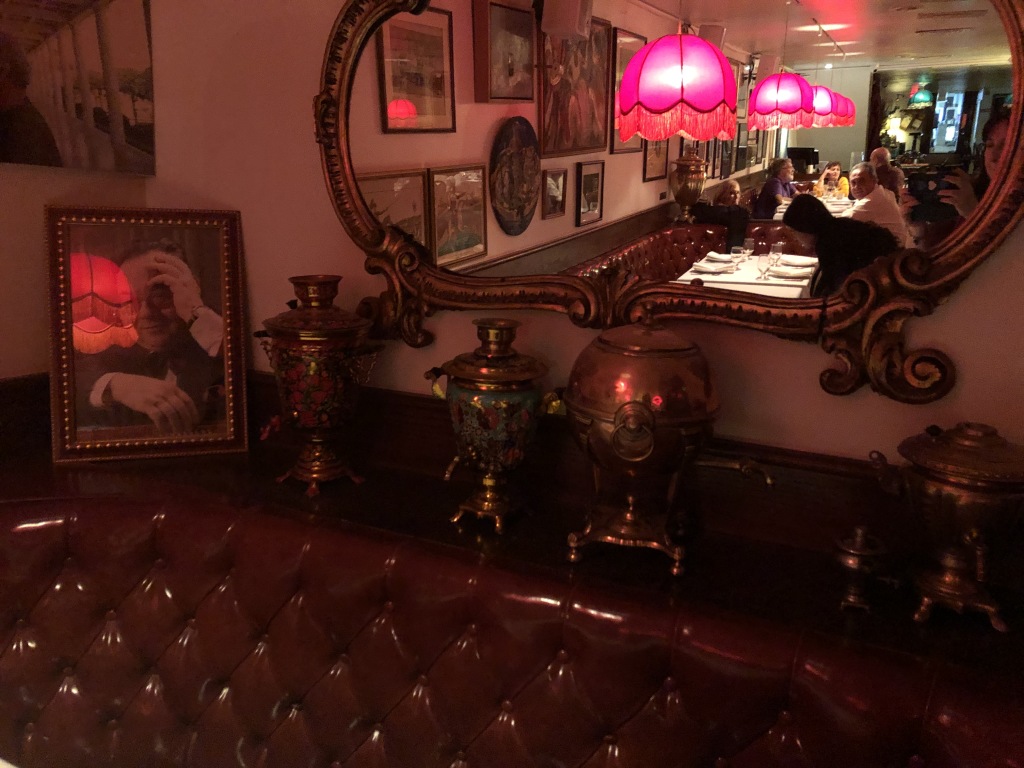 Some of the samovars. Photo by Karen Salkin.

The first thing we ate was the black bread, which comes to the table wonderfully warm, with lovely soft butter. Manny commented that it’s “sweet,” while Sheila loved the “great crust.” She said she could have eaten just the bread as her whole meal!

There’s an entire caviar menu here, but none of us are into that, which was actually good because that left room for us to try so many other dishes. 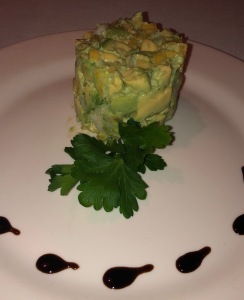 Several of the Signature Salads are creative. We decided to go for the most interesting one–the Prawn and Avocado, which also features mango. Sheila said it was “very refreshing,” and that the mango was “a nice surprise.” And the presentation made it even more exotic—it appears as a tall mound of green and yellow, just like my favorite twirl of frozen custard in Coney Island!

We tried two hot appetizers, both with potatoes, and lucked-out because, as Manny said, (and Sheila and I whole-heartedly agree with,) all the potatoes here are amazing! And he’s never deemed anything better than just “good” before in his whole life! He jumped all the way to “amazing” for Russian Samovar’s food!!! Wow. Will wonders never cease? 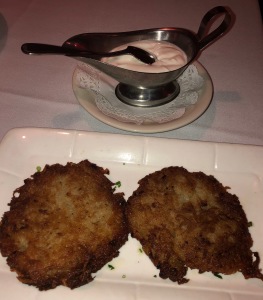 The vegan Vareniki is pan-fried potato dumplings with mushrooms and onions, which Sheila said “excited the gustatory pallet.” We also tried the Deruny, which is a duo of giant pan-fried potato pancakes, and are just the perfect crispness for me. They come with a side of sour cream that’s presented in a gravy boat, so it looks more special than the usual “dollop” that accompanies latkes at other eateries.

Then we moved on to the entrees. Sheila had the Grilled Atlantic Salmon, which she said was “cooked perfectly” and was “delicate and very good.” I had the Chicken Kiev, which comes with the bone in. It was delish, and the creamy mashed potatoes were the perfect complement to it. 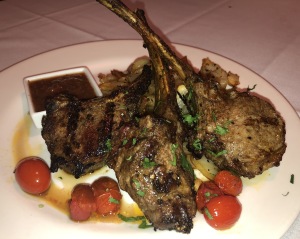 This next one really surprised me because Manny is just a basic eater, but here he was happy to try the Karski, which is grilled marinated double cuts of lamb in Georgian spices. And…he said it was fabulous! It came in a presentation of three baby chops with a spicy sauce on the side. And, as were the rest of the spuds at Russian Samovar, the home fries accompanying it were out of this world! Manny actually said this is the perfect meal for a meat-and-potatoes guy. I would have not thought of that myself because the dish is so upscale.

We were totally full by then, but just for you guys, we tried a few of the interesting desserts, many of which I’ve never seen anywhere before, such as the Medovik, a layered honey cake. But our favorite was the homemade Napoleon. Manny was a fan of its very light, flaky crust, while Sheila loved the combo of that with the vanilla cream filling. I just managed to say, “Yum!” 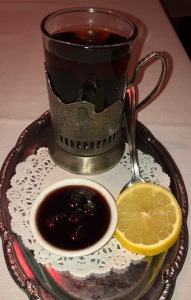 One of the most interesting aspects of the whole meal is the Russian Samovar Tea, which is served with whole cherry preserves and lemon. Sheila loved every aspect of it, especially the beautiful way in which it’s presented on a tray with all the components separate on it.

On top of all that, Russian Samovar has an amazing history! You should really read about all of it on their informative website, but here are the two tidbits that I find most fascinating: One is that this restaurant is the original site of Jilly’s, where Frank Sinatra and The Rat Pack hung-out all the time! And the other is that the incredible Mikhail Baryshnikov is one of the current owners! I can just see him jete-ing through the dining room to the strains of Ochi Chernye playing on the piano! And I’ll join him for a spirited pas de deux next time I’m in town.