This soiree in New York was a surprisingly fun one! Magazine parties are notoriously dry and boring, but my friend Manny and I really enjoyed Resident Magazine’s fete celebrating golf expert Ann Liguori, who’s gracing the cover of their latest issue. 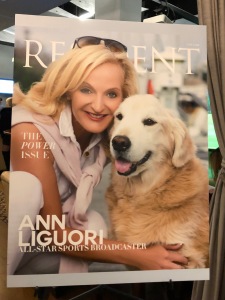 A poster of the mag’s cover. Photo by Karen Salkin, as is the one at the top of this page.

The festivities took place at Golf & Body NYC, near Herald Square. Manny and I were delighted to discover this place. It had a “Joe sent me” vibe to it, if Joe was a golfer!

It’s a private indoor facility with golf “simulators,” so New Yorkers can work on their games any time of year, in any weather, and without having to drive out to whatever far-away place has actual golf courses in that area of the world.

So much was going on at this soiree! We mingled, ate, and some of us even swung a few balls. Ann addressed the assemblage at one point, to thank us for coming, and then went around and greeted some of her and Resident Mag’s guests personally. And her bro, Dan Liguori, provided fabulous live music all night.

There were also prizes awarded for various virtual golf competitions, which I really wanted to do but had no time for that night. Here’s a shock—I used to play golf! I was pretty weak, but not as awful as Charles Barkley is! He could use a few sessions, (or a few dozen,) at this place! I first learned the game in high school, when my auxiliary boyfriend was on the golf team, and then when I was doing my TV show, I got invited to play in many celebrity charity golf classics. I was always the worst celeb player, by far, but I did have the cutest wardrobe. So there’s that. 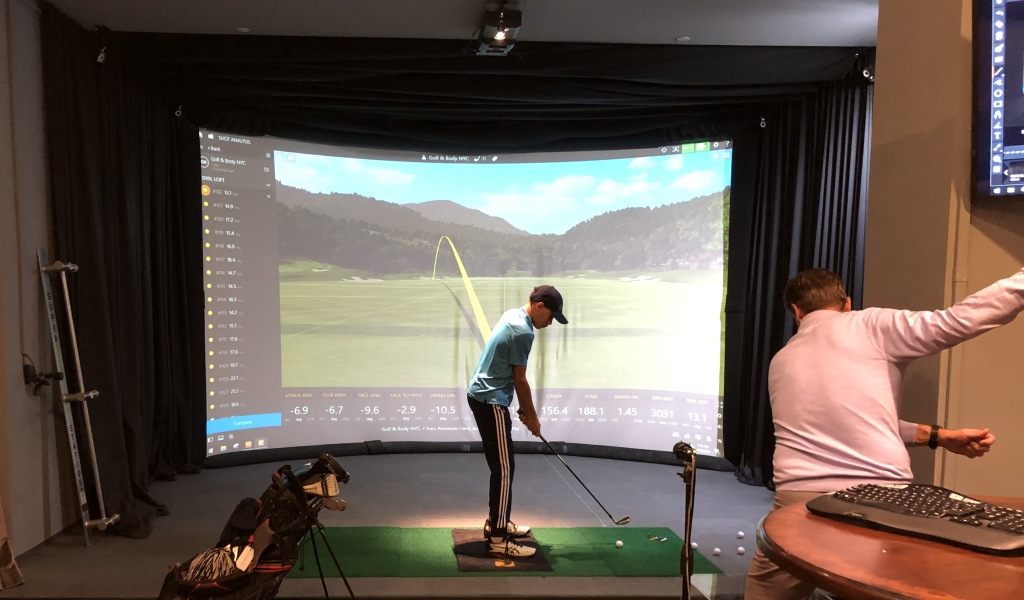 A student and instructor in one of the golf simulators. Photo by Karen Salkin.

Speaking of wardrobe, the young girl photog for this event, who was styling with her sideways beret, was just adorbs. She was so polite and non-intrusive, which was a breath of fresh air in that category. 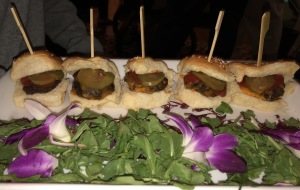 There was also plenty of food all night. In addition to a healthful little buffet of veggies, cheeses, and figs, fabulous tidbits were passed almost continuously. The cheeseburger sliders were the best I’ve ever tasted, and I was also a major fan of the pork dumplings. Manny enjoyed the little mac ’n cheese bites, the tiny chicken nuggets in the cutest teensy waffle cones ever, and the mahi-mahi fish tacos. I wish I had eaten more of all of it, but as were on our way to yet another party in a restaurant right after this one, we held back a bit.

My favorite server, Armand, told me that the caterer was the venue’s own chef, and showed me that there’s a little cafe right adjacent to the golf lounges. I may have to start playing again, just to access that eatery!

But the most important aspect of the evening, of course, is that we all were there to support Ann. She and I had a lovely chat for awhile before I had to leave for that other function. I loved meeting a fellow female sports-radio personality. I stopped doing that a long while ago, (when I got way too busy with this e-zine for all my other media endeavors,) so I give her lots of credit for continuing in that arena on behalf of all us sports-loving gals!

But I was very surprised by one part of our convo, because I erroneously misspelled Ann’s last name in my head. I asked if she was related to the wonderful Olympics middle distance runner and commentator, Marty Liquori, who’s really famous, and she not only is not related to him, (because the middle of her last name has a “g” where Marty’s has a “q”,) she didn’t know who he is! But shouldn’t all people with a very similar unusual last name, especially in sports, know each other?! Since I now know both of them, (I ran on a team with Marty in the Jimmy Stewart Marathon many moons ago,) I guess I’ll just have to introduce them!

In addition to covering golf, Ann comments on tennis. So if she’s ever met The Stranger I Love Most, Roger Federer, I will either have to shun her, (out of jealousy,) or totally befriend her, (in the hope that she can introduce me as a quid pro quo for getting the Liquori-Liguori clan together!) 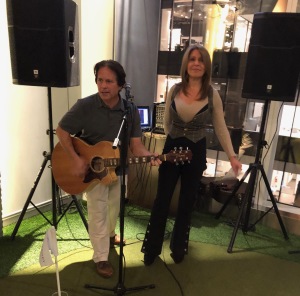 Ann is also a philanthropist with her own Foundation, which has the very worthwhile mission of raising greatly-needed funds for cancer research.  To that end, next June, (when I will, coincidentally, be in New York again!,) she will host a Charity Golf Classic in the Hamptons.

As a reminder of all the fun we had at this event, the magazines were readily available to us throughout, and as we exited, we each received a copy of a Ann’s golf book. What a perfect way to end a really enjoyable evening!