People keep asking me when I’m going to start reviewing this year’s crop of films already! The answer is: Right now!

I can’t promise there will be too many more, though. None of the rest have inspired me to use my precious time to give you my opinions of them. I sit down and begin to write the review, then just lose interest. 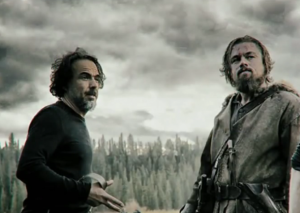 Director Alejandro Innarritu and Leonardo DiCaprio, hard at work on the set of The Revenant.

But shockingly, I loved The Revenant! Who woulda thunk it?! Certainly not me! I was actually dreaded seeing it. But I see every SAG Awards-nominated film to be able to vote fairly, so I wasn’t about to leave this one out.

And, boy am I glad I saw it! I’ve been telling everyone who will listen, (and even those that don’t,) that this is the movie of the year. And I’ve been doing it since over a week before the Golden Globes, where, happily, both the film and Leo won! And the deserving director, Alejandro Innarritu, did, too!!! Yay!

I’m saying right here (and I’ve already tweeted it @MajorCelebrity) that if Leonardo DiCaprio doesn’t finally win an Oscar for his tour de force performance as frontier hero, Hugh Glass, they should just shut the whole ceremony down from here on out. He’s his usual amazing self, and this year, there are no dark horses out there, (like Matthew McConaughey in his once-in-a-lifetime performance,) to rival his.

So, rather than my usual coherent, linear reviews, here are my thoughts on The Revenant, in no particular order, but mostly as they came to me. (And please make sure to click here to hear my own story of surviving a bear attack. I’m not kidding! www.youtube.com/watch?v=spG8zu732hM.)

I cannot say enough good things about The Revenant! 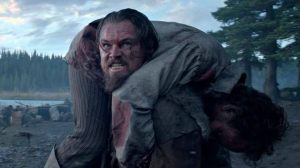 First of all, I love the intelligent title, which is really quite perfect. I’d love to know just who came up with it, to give them their props. Hopefully, it will make audiences use a dictionary for once! But, because I love my own readers, I did the work for you. (Yes—shockingly, there is one word of which I did not already know the definition!!! Will wonders never cease?!) So, here it is: From the French word “revenir,” (which means “to return,”) “revenant” is a noun for “a person who returns as a spirit after death; ghost.” It can also refer to someone who returns after a long absence. But I feel the ghostly presence is the one at work here, even though it’s based on a real man, who lived after this ghastly experience, because he couldn’t possibly be 100% of the world after all these horrors that he survived. Heck, I’m not even 100% after surviving cleaning-out my house in New York!

You know how they play a song at the end of a film, during the credits, that wasn’t a part of the actual film? This time, that ditty should have been I Will Survive! No joke.

There were a few tiny holes in the story, but this time, I chose to forgive them. Except for one big technical snafu. There were blood droplets and snowflakes on the lens in that final fight scene, which was a tad distracting. They should have just shot it over. I’m surprised they did not, because when I heard Leo and Alejandro speak at a private event this past week-end, Leo went into great detail about what a perfectionist the director is! [Note: There was a bit of snow on the lens at other times, too, but it was quicker.]

The movie is very violent, but that’s the way life was back then. (It takes place in 1820.)

This is the Winter version of Castaway! 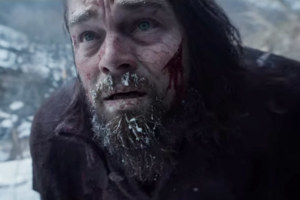 All the music is perfect!

And, of course, the cinematography, (by Emmanuel “Chivo” Lubezki,) is brilliant. Do yourself a favor and see it on a big screen, not on the TV in your bedroom.

I’ve loved Leo since What’s Eating Gilbert Grape, and this just put me over the top. That guy can do anything!

I usually don’t like ambiguous endings, but this time, it is more than appropriate. The movie ends the only way it can, really. 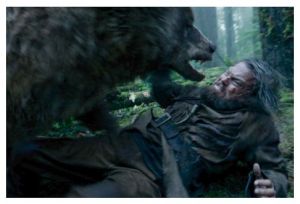 And calm down, internet nuts—as brutal as the bear mauling is, there is no “bear rape!” It’s a mama bear, for goodness sake!!!

I love Tom Hardy, but he should not have received equal billing to Leonardo. The billing should have read “Leonardo DiCaprio is The Revenant.”

The whole thing brought back my memories of my own story of survival on a mountain. I’m saying that half-jokingly, but it’s true nonetheless. In one of my four colleges, during the summer session, my posse talked me into going to an all-week-end music festival on a mountain. As we hiked in, the entire group was making fun of me, insisting I’d never last the four days. Meanwhile, I’m the only one who did!!! I stayed with strangers, and almost died from being drugged. It was horrible. But I made it through.

And when I returned to campus, all filthy, sunburned, and worn-out, they all looked like they were seeing a ghost. (So, I literally just realized, I was a revenant, too!!!) No one could believe I made it through, especially since I hate being dirty. I sat in the bathtub for about four hours!

It’s not exactly the story of survival on a mountain that’s portrayed in this film, but it’s a traumatic modern-day one.

Since I wanted to tell you only one story on YouTube today, I went with my bear encounter one. It’s always been my friend, Carole’s, favorite one, that she’s requested over and over again. (I can hear her laughing as I write this.) I hope you enjoy it, as well. Click here to see it on YouTube: www.youtube.com/watch?v=spG8zu732hM