[Note: In this week leading up to the Oscars, I’ll be reviewing several of the top films of the year, the ones that I didn’t already get to before the SAG Awards. All of those reviews are still available in my archives, (which you can access on the right of this page,) but, because it’s the best film of the year, (or of any year!,) here’s the link to my review of The Revenant, so you don’t have to search for it: itsnotaboutme.tv/news/movie-review-the-revenant.] 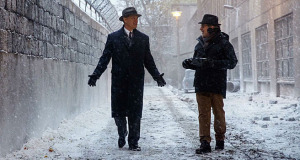 The two men who were snubbed by the Oscars, star Tom Hanks and director Steven Spielberg.

This is the second best film of the year, (behind the most superior film ever, The Revenant,) so it, along with some others, got screwed a bit. There are no Oscar nominations for leading actor, Tom Hanks, nor, much worse than that, for its director, Steven Spielberg! And it was such a big undertaking, which is pulled-off so admirably, that that duo definitely deserved the nods. So, I guess that Russians, Jews, and Irish peeps (as the lead character is) should boycott the Oscars, as well. Where does it stop?! 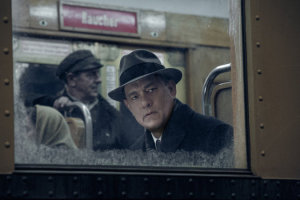 Okay, that last bit is just about my annoyance with this crazy Oscars boycott nonsense. All that politically-correct inanity aside, this really is the second best film this year. I’m not into real-life Cold War stories, (because they usually just make my head hurt,) but Bridge of Spies is riveting! And, because this pic had no screenings, and sent an internet code rather than screeners, (for us SAG Awards voters,) Mr. X and I had to watch it on our desktop computer, together, which isn’t the optimal way to see a movie. But we loved it.

I’m not a particular Tom Hanks aficionado, either, but I felt for his character the whole time. He was perfect for the role. And he should have been Oscar-nominated over Michael Fassbender and Bryan Cranston, for sure, and possibly over Matt Damon, as well. 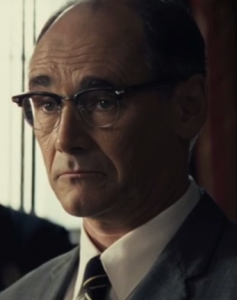 The real hero here, though, is Mark Rylance, as the Russian spy. What a superb performance he gave! I’ve been aware of him for some time now, (mainly because he’s won a trio of Tony Awards!,) but had never seen his work before. I was in awe of what he did here! For me, he should win Best Supporting Actor hands-down. (Yes, even over the always-brilliant Tom Hardy for my beloved The Revenant!) Actually, it should have been a tie between Mark and Michael Shannon in the uber-painful 99 Homes, (which I’ll be reviewing tomorrow, along with a few other flicks,) but the latter wasn’t even nominated for an Oscar! (I’m so glad that my fellow SAG members were smart enough to give him the nod for our awards!) I have a feeling, though, that old-ster Sylvester Stallone will win this one, for sentimental reasons. I have yet to see Creed, so I really don’t know how he well he did, but I can’t imagine that his performance is superior to that of Mark Rylance.

So there you have it. Bridge of Spies is a very interesting real-life story, directed incredibly well, with beyond-excellent performances, with (I can’t imagine I’m ruining this for anyone, since it’s a true tale, but Spoiler Alert, anyway,) a happy ending! What more can one want in a film?!

Here’s a heads-up for my Twitter followers, whom I totally appreciate: I will be live-tweeting the Oscars on Sunday, beginning with as many arrivals as I can. @MajorCelebrity. If you don’t already follow me, there’s still time before the big show.