THE REST OF THE OSCAR CONTENDERS

[Note: In this week leading up to the Oscars, I’ll be reviewing several of the top films of the year, the ones that I didn’t already get to before the SAG Awards. All of those reviews are still available in my archives, (which you can access on the right of this page,) but, because it’s the best film of the year, (or of any year!,) here’s the link to my review of The Revenant, so you don’t have to search for it: itsnotaboutme.tv/news/movie-review-the-revenant.]

Since the 2016 Oscars will finally be here on Sunday, there’s no time left for me to write one individual review a day. So, here are a few sentences each on some of the contenders I haven’t gotten to review for you in the past few months.

BEASTS OF NO NATION

I really don’t understand why anyone would want to make such a depressing film. (Or any depressing film, for that matter, of which there are way too many.) What’s the point? I know that Beasts of No Nation was a novel first, but I don’t get the writing of it, either. There’s too much real pain in reality; I would think that most people, (like myself,) would want to get away from all that stress in their entertainment.

The one and only reason I’m reviewing this is to sing the praises of young Abraham Attah. What a talent. That boy has an old soul, as I felt Leonardo DiCaprio did when I saw What’s Eating Gilbert Grape. Abraham’s performance is not quite on that level, but close.

He should have been nominated for an Oscar.

Idris Elba, on the other hand, while excellent, didn’t necessarily deserve to be nominated (which he wasn’t, by the way.) So, that whole boycott nonsense, about no black actors getting nods, is nuts. (It was really started by Will Smith’s crazy wife, Jada Pinkett, because her husband didn’t get recognized for his role in Concussion this year, not because she cared that Idris did not. And it blindly snowballed from there.) Now people are saying that Idris should have been nominated, but they’re not saying just which other actor should not have, to make room for him! The whole thing has just gotten way out of hand.

And the people who are saying these stupid things have clearly not seen this film! Some think that Idris was in the Best Actor category, while most suggest it was a supporting role, (which is what he won a recent SAG Award for.) Make up your minds, people, before you throw your opinions into the fray!

This film about home foreclosures is excellent, (especially the too-true-to-life acting,) but, because it was so real, I had to force myself to keep watching after the first five minutes; it was just way too painful. I really could not bear it. Good thing I was watching at home because I seriously needed a break every few minutes. I couldn’t breathe from the anxiety of what the characters were going through. 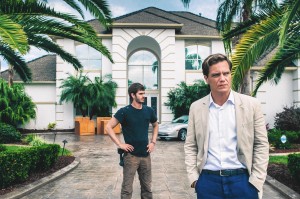 99 Homes portrays a real life that many of us in LA are lucky to not know about. People losing their homes and possessions at the drop of a hat is a hard subject to see at any time, but on a giant screen it’s extra hard to take. But we should all be aware this kind of stuff happens to others on a daily basis.

And I’m sure there are creeps like the character Michael Shannon plays so brilliantly. He’s just great. So unlikable. How he wasn’t nominated for an Oscar, I just can’t fathom. I voted for him for the SAGs, but I already knew that, because of Race-Gate (which I just coined, by the way,) Idris Elba would win. Now I can just about guarantee that Sylvester Stallone will win the Oscar for Creed. Mark my words. (Though it really should go to Mark Rylance for Bridge of Spies, which I reviewed yesterday: itsnotaboutme.tv/news/movie-review-bridge-of-spies.)

This film was so much more effective for me because I had absolutely no idea of the subject matter. So, (spoiler alert for a little while here) I kept wondering why the kid wasn’t going to school. Then, a few scenes in, I realized what was going on, and I felt sick. I’m claustrophobic, and until they got rescued, (which I had no idea was going to happen,) Room was hard to watch. 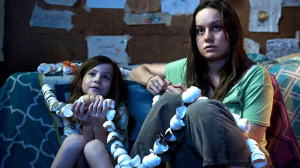 [Okay—if you looked away, you can continue reading now.] Again, here’s a case of someone who should have been nominated for an Oscar—the little boy, Jacob Tremblay. I actually felt that he carried the film, and could have even been in the Lead Actor category! So, I guess we have another instance of discrimination here—age! The Academy voters must have felt that he was too young. How adorable would it be if all the little kid actors formed a picket line outside the Dolby Theatre on Sunday night? (And, as the Peter Pan/Pied Piper I’ve been to kids my whole life, I can lead them!)

On the other hand, while Brie Larson, who played the mother, was really good, her performance didn’t really knock my socks off. I know that she’s won most awards this season, but I really don’t feel that this was an Academy-Award caliber performance. I just think that the Best Actress category is very weak this year, so she sort-of snuck in. And will probably win the big one, as well. (I, by the way, am pulling for Charlotte Rampling of 45 Years. While her film may have been a snoozefest, her performance was definitely not!)

And you know what? I really don’t care this year. I don’t have a dog in this race. All I care about is that Leonardo wins Best Actor, his director, Alejandro Inarritu, wins, as well, and their film, the beyond-brilliant The Revenant, wins Best Picture. And then I won’t care about the rest.

This one was good and interesting, and you never knew how it would end. But I resent a film getting to invoke the name of my beloved Brooklyn, when it’s really not about the place. Just sayin’.

It felt like it took forty-five years to watch this one!

Here’s a heads-up for my Twitter followers, whom I totally appreciate: I will be live-tweeting the Oscars on Sunday, beginning with as many arrivals as I can. If you don’t already follow me, there’s still time before the big show. @MajorCelebrity.