Trending
You are at:Home»THE ARTS»COMEDY»MAGIC/COMEDY: DIRTY TRICKS WITH THE NEW BAD BOYS OF MAGIC
By Karen Salkin on August 12, 2019 · COMEDY, MAGIC

DIRTY TRICKS WITH THE NEW BAD BOYS OF MAGIC

I love going out on Sunday nights! There’s just something so cozy and romantic about it, even with pals or family. And Dirty Tricks is a really fun nightlife experience, one that you can have for yourselves the third Sunday of every month. (The August one is coming up this week-end.)

Dirty Tricks is a once-a-month magic, variety, and comedy show hosted by a duo of comedic magicians, Chicagoans known as The New Bad Boys of Magic. 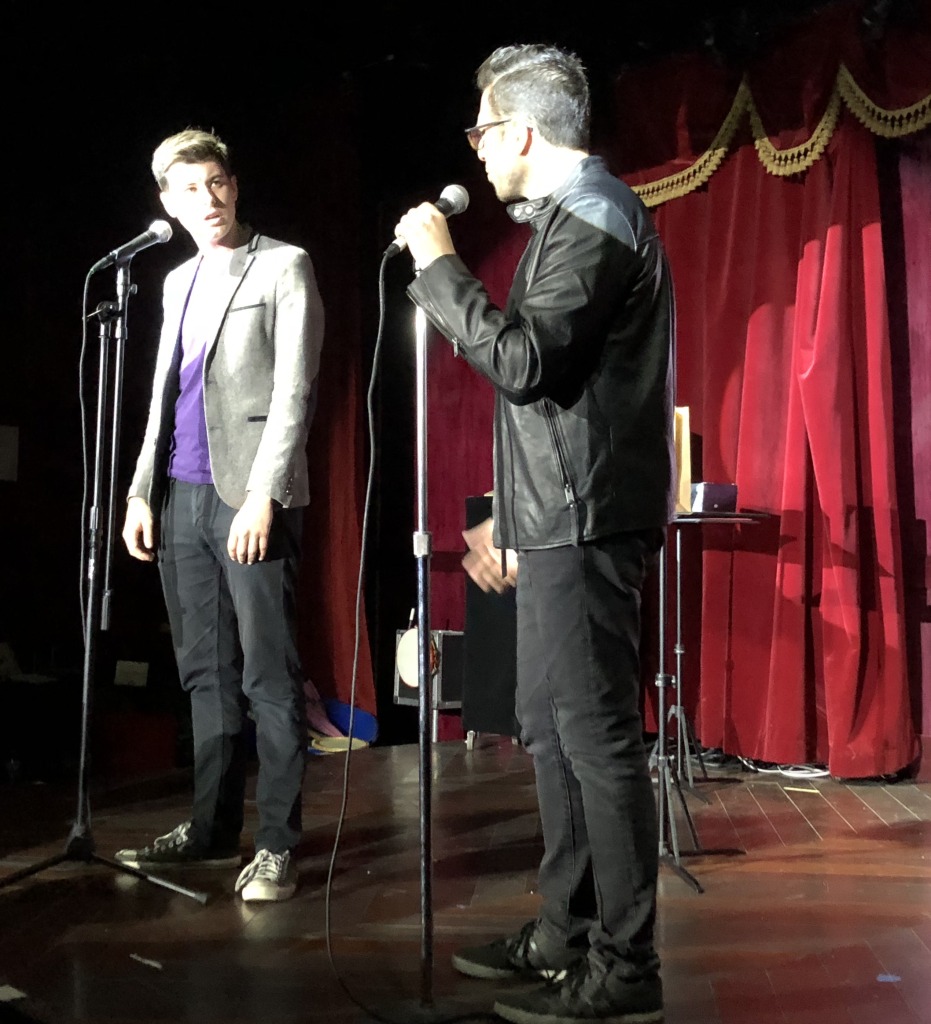 Daniel Donohue and Eric Siegel, (who are in the pic at the top of this page, as well.) Photo by Karen Salkin.

But don’t let the “Bad Boys” and “Dirty Tricks” monikers fool you. Perhaps their very first trick, before you even see the show, is to “trick” people into thinking that this is somewhat of an x-rated show, either in language or tenor. That erroneous assumption made my friend and me almost pass on seeing it, which would have been a shame because it’s close to the perfect night out! And not dirty or bawdy at all!!!

Besides how fun it all is, it’s also the best entertainment deal in town—each ticket is only ten dollars! As a nutty friend of mine in New York once said when I told her that I had joined the circus as a young Jewish girl from Brooklyn, I’ve never heard of such a thing!!! 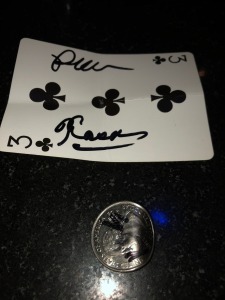 The proof of the close-up magic we saw at our own table–we signed both the card and quarter before he produced the former and bent the latter right in front of our eyes! Photo by Karen Salkin.

Dirty Tricks is performed in the nightclub area of an interesting bar in Hollywood. (When have you ever heard me be a fan of a bar?! That answer is never!) It’s so dark in there that you can dress as badly as you like. You can even go with dirty hair (to match the tricks,) which I wish I had known that morning. No one can see what you look like, unless you get called on stage, so maybe be prepared just a bit, after all, although that prescience didn’t help the audience members I saw it with! I feel bad that I made my friend stop on the way there to buy something nicer than what she showed up in, which turned-out to be absolutely not necessary. (But no worries—she adores her new jacket!)

Speaking of my pal, I brought someone who is not a fan of magic, who went only to hang-out with me, and she ended-up loving this show. She dubbed the hosts, (one Jewish, one not,) the “Martin and Lewis of card tricks!” What a great pair to be compared to!

We were surprised to see that the show is not all magic—there are variety acts mixed in. The show is comprised of different acts each month, so you never see the same show. And at such a bargain price, why wouldn’t you go multiple times?! 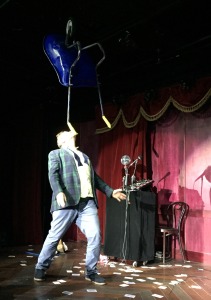 I hate to say this, but the night we saw it, outside of an amazing comedy juggler, (or balancing act—I don’t know what to call that talented man,) they should have stuck to just magic because the show featured two females who attempted to be funny, but were brutally bad. So let’s get those negative parts over with so I can laud the rest of the cast.

These women were the only two bummers in the show, and absolutely did not belong there. You could just feel the energy being sucked-out of the room when they were on.  Even the loud “heckler” woman who was there that night, who wanted to participate in every other act in the show, couldn’t come up with something to call out. Madeline Wager took on a character of “Krafty Karen,” (something no one can ever label me!,) and just made bad crafts out of stuff the audience gave her. We had been expecting that the awful objects would somehow be transformed with magic, but they just lay there. (Like her supposed jokes.) Nothing she said or did was even remotely clever or funny; her act was just stupid and annoying. It was something a kid does in his living room for his poor family who has to pretend to be amused, and it definitely should not be anywhere near a professional stage, especially along with these talented performers!

And Bailey Norton’s stand-up “comedy” seemed more like she was at an open mike night. My friend and I could not wait for the end of her way-too-long act; she brought the mirth of the audience down about a zillion levels from the actually-entertaining performers. (But I did covet her perfect color matte lipstick. So there’s that.) 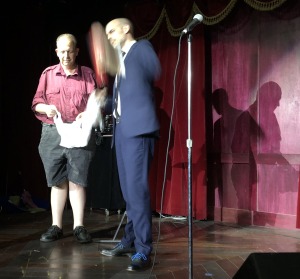 Simon Coronel, (whose hands are moving so fast you can’t even see them!,) on the right, with a member of the audience. Photo by Karen Salkin.

[Note: I really try to support women, by the way, but they have to merit the props. (Like in my recent review of a new production of West Side Story. In case you missed it, I said the gals would have won the rumble against the guys!) And more importantly, I always tell you the truth.]

But the male performers kicked butt! Hosts Dan and Justin kept the rest of the show moving along nicely all night; their hallmark appears to be easy-going banter along with mind-blowing tricks. I was in the front row, and could not figure-out how they did 99.9% of them. (I did see one little joke being set-up at the very beginning, but it was just done as a tiny throw-away, anyway.)

In addition to that humorous pair, there were three more guys, and I loved them all!

The first guest up was Simon Coronel, whose trick with an audience member and two plastic bags was astounding. And hilarious at the same time. 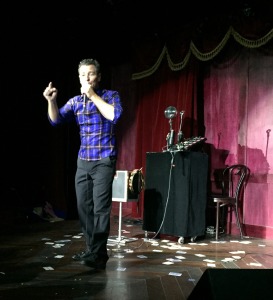 Then Eric Buss not only did great magic, but his beatboxing brought such a surprise, and musical, element to the proceedings. I really appreciated him.

And the juggling of Michael Rayner (who bills himself as a “post-modern vaudevillian,” which is funny in itself,) was not only comedic but downright jaw-dropping! I can’t imagine how he even comes up with these creative tricks. (He’s the uncategorizable man I referenced at the top of this review.)

Those are the only acts I can vouch for because I have no idea who will be in Dirty Tricks each show. But I have a feeling that every time is filled with fun.

That fun actually begins the second you walk through the door of The Three Clubs. (I do not get the name, either—it’s just one club. Did they mean to call it the three of clubs???) Anyway, once you enter, you’re in a dark bar, which oozes Old Hollywood. (Well, what I could see of it anyway. I mean it—it’s almost pitch black in there! The place is so dark that I left all my notes behind!!!)

As we walked in, my friend said, “They probably shoot movies here.” And they do indeed, along with TV shows; that bartender told her that an episode of How To Get Away With Murder will be shooting there very soon. (So hopefully, that lack of light will prevent us from having to view Viola Davis’ perennially-dripping nose yet again!!!) 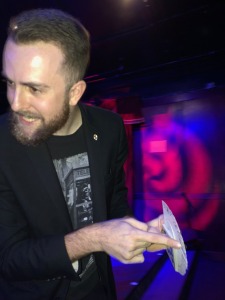 In the actual theatre space, there are a few rows of tables and chairs, and then a few more of just chairs. If you’re there early enough to score one of the tables, you have a shot at being treated to private close-up magic before the stage show begins, which is always special in my book. Each time brings a different performer from the Magic Castle, (where Daniel and Eric are members.) We were lucky to get a few tricks from cute Frankie Foti, who astounded us right in front of our eyes, and put my friend in a good mood from the start of the evening.

There’s supposed to be a two-drink-minimum, but they don’t really enforce it, especially for teetotalers like me. But the rest of the assemblage seemed more than happy to imbibe all night, so they more than made up for my dearth of drinks. And there’s a really cute method of how to order more without disturbing your fellow audience members. There’s a little electric tea light on each table, and you just turn it on if you want a drink during the show. (But already-tipsy peeps may not figure-out how to activate them, especially in such darkness, so it’s a good way for the club to cut people off without having to actually do so!)

All in all, you can’t do much better than Dirty Tricks—a really fun show in an interesting venue on an otherwise-slow-in-town Sunday night! And if you feel that you’ll need some sustenance during the show, just stop in the very near-by Dollar Tree for some snacks beforehand. You can even get something to wear that night in the Goodwill store in that same parking lot. I seriously don’t think a better Sunday night can be had anywhere else in town, on every level!