At this point in my life, I’ve lost track of just how many versions of the fabulous Cirque du Soleil I’ve seen. It’s probably been a couple of decades since I attended my very first one, at the Santa Monica Pier, but I can still remember the excitement I felt. To this day, I think of it as the most romantic date you can have, even if it’s just with a friend. (I’ll be reminding you all of that fact in my upcoming Valentine’s Gift Ideas column.) 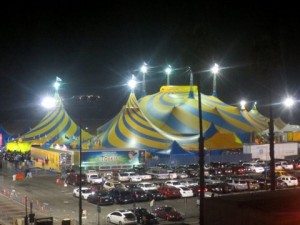 I felt that very same excitement all these years later upon arriving at their newest show, Totem, on opening night earlier this week. Seeing that signature blue and yellow tent, the Grand Chapiteau, is one of the most special feelings in the world.

And once inside, this show is as spectacular as its predecessors!

Totem has actually become my favorite one ever! I don’t know if it’s the best, only because they’re all so breath-taking that I can’t even make that judgement, but Totem is definitely now my fave. Maybe that’s because Mr. X was with me, period. Or because I know he can’t bear to watch super-dangerous acts, and these had just enough danger to wow us, and make us grab our partner’s hands or our own faces, but didn’t make us so uncomfortable that we had to cover our eyes. It was the perfect show!

I also, despite being in a circus myself, don’t love most clown acts, but these were really fun. And they weren’t too long and pervasive. And Mr. X seemed charmed by them. 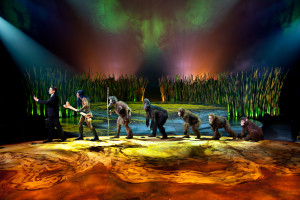 What a brilliant visual! Photo courtesy of OSA Images.

As with all renditions of Cirque, there’s a theme throughout, and Totem‘s is billed as “a fascinating journey into the evolution of mankind.” I’m not even going to try to put it into better words than the already-perfect press release does, so I’ll share those with you: “Written and directed by world-renowned multi-disciplinary artist Robert Lepage, Totem traces the fascinating journey of the human species from its original amphibian state to its ultimate desire to fly. The characters evolve on a stage evoking a giant turtle, the symbol of origin for many ancient civilizations.” It goes on to say, “Inspired by many founding myths, Totem illustrates, through a visual and acrobatic language, the evolutionary progress of species. Somewhere between science and legend, Totem explores the ties that bind Man to other species, his dreams, and his infinite potential.” All I can add to that is, “Wow!” 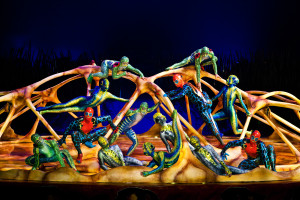 They definitely succeeded in doing all that! I really don’t want to tell you about the individual acts because I always feel that you just have to experience the show for yourselves. Just be aware of the amazing amount of thought and work that goes into everything that the Cirque company does. It’s mind-boggling! How do they come up with different acts of this high caliber, time after time??? 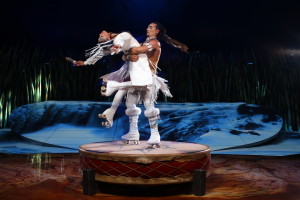 As usual, there are so many surprises. Do not avert your eyes, even for a second, or you’ll miss something. As Mr. X so aptly put it, “Imagination is not in short supply.” He was knocked-out by the “creative, brilliant,” work of all involved, and lauded the set as much as the performers. And he said that the music was so “precise” that he really thought it had to be pre-recorded. (He was so glued to the acts that he didn’t notice the musicians hiding behind the reeds at the back of the stage.)

There are no “slow” parts in Totem; only instances that allow you to catch your breath for a second and re-group, as each act begins, and then methodically builds to its crescendo. It’s all so stunning to behold. 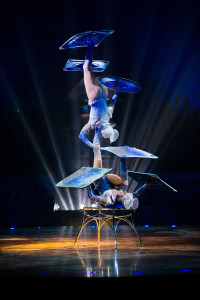 As I was going through the fifty possible photos to include with this review, I kept gasping again! I knew, of course, that this show featured so much greatness, and then I’d forget something for a second, (because one can’t keep all that fabulous-ness in one’s mind all the time,) until I saw each new picture. How does Cirque consistently find so many incredibly talented performers???

If you’ve never seen any Cirque du Soleil shows at all, Totem is a great one to start with. And if you’ve seen them all, this is a lovely one to add to your collection of memories.

You’ll likely have the same experience of the actual show as I did, but because it was opening night, there were many special touches; I love that they were for the entire audience, and not just certain VIPs. I was talking to one of the women in charge of the festivities, and she said they like to include everyone in their parties, not just the invited guests. How nice of them. Mr. X, who usually eschews soirées unless they have hip-hop DJs, was especially impressed with the post-show soiree.

Champagne as we walked in! Photo by Karen Salkin.

Here are some of the deets of those surprises, before, at intermission, and after: As we entered the concession tent, (which is on the way to our seats,) there were tables of champagne, (in very interesting flutes, no less,) with which to toast the Premiere. As if that wasn’t enough, there was plentiful popcorn for everyone. (Even though yours won’t be complimentary, I recommend you buy it because it’s seriously the best popcorn I’ve ever eaten!!!)

Then, at halftime, they had people dressed as natives, (or something like that,) going around with big canoe-type conveyances containing little chocolate bites, and we each shoveled our own portions into the provided cups. They also had guys in fisherman gear offering delicious chocolate-covered marshmallows that you pulled right off their reels! (And there’s also comped filtered water for everyone every show. You’ll find-out why in my closing paragraph.) 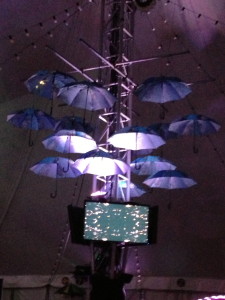 The umbrellas and giant screen at the top of the party tent. Photo by Karen Salkin.

The after-party featured servers in giant trays they were wearing around their persons(!!!) that were filled with hors-d’oeuvres! (Or as I like to call them, the “human food trays.”) There were pulled pork cups, vegetable pizza, shrimp (with the cocktail sauce in an injection capsule inserted into each individual crustacean!,) and chicken skewers. Mr. X was indeed correct in appreciating the “generous party!”

But even if you missed the Premiere, (as they so classily call it,) you can have your own special heightened experience with a different level of tickets, so you may want to explore those possibilities. (It’s all explained on their site, the link to which is below, with all the other pertinent info.) You also have all the eateries and fun of the Santa Monica Pier, which is right adjacent to the tent site. 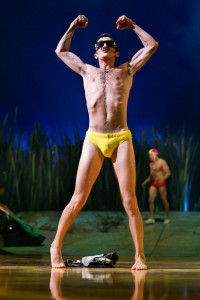 Only because I’m so sensitive to people’s feelings that I’ve been dubbed an Empath by many, there was one tiny thing that made me a bit sad; here were these amazing Totem performers, whose accomplishments we were there to fete, and because of the wondrous costumes and make-up, we barely recognized any of them at the party!!! We would have had to examine each guest’s abs to know just who the performers were! (Except for Valentino, the super-skinny, pompadoured Italian clown; he was easy to spot, even in a crowd, and was always holding court. You go, bambino!)

One last note: I really appreciate that this wonderfully creative company doesn’t just entertain us, but they have a cause, as well. One Drop fights poverty by providing access to water and sanitation in developing countries. We all should check into it; you know that at least I will!