I finally made it to another theatre’s stage in LA—The Microsoft! Read on to find-out how and why. I can just about guarantee it’s not what you expect.

As I’m sure many of you have noticed by now, I’ve been eschewing going out again for the past two and half months because of the dangers of the always-lurking Covid virus.  But when I was invited to Cirque du Soleil’s Media Day ahead of the Los Angeles opening of their show, Ovo, I bucked right up and left the house–there was no way I was going to miss it! 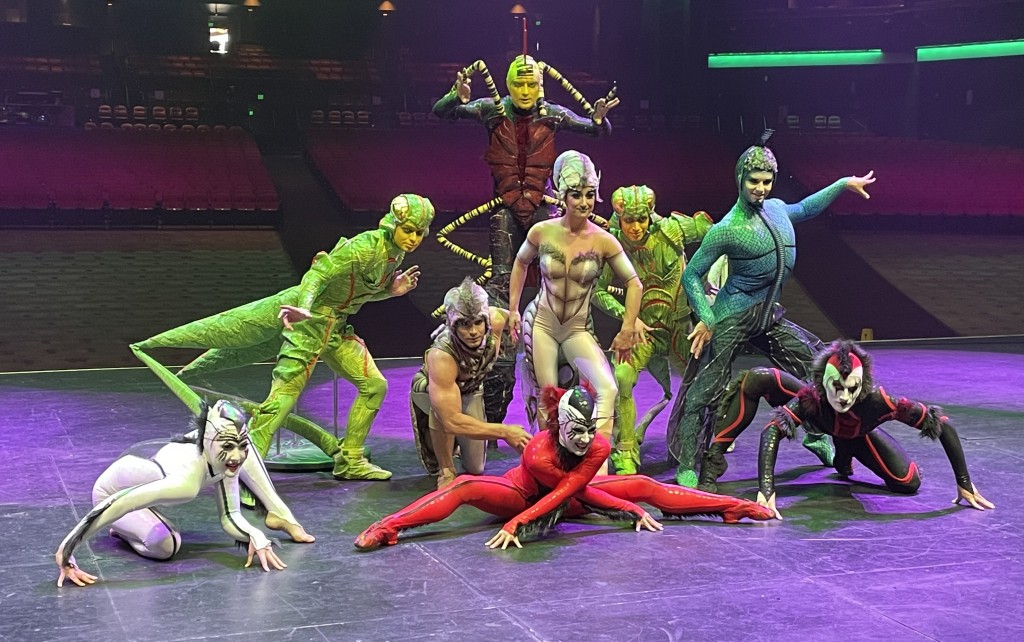 Ovo cast photo by Karen Salkin, as is the one at the top of the page.

It’s glorious news that Cirque is back after the same two-year hiatus that all of us have been going through. At the beginning of the pandemic, though, I was really worried that they may have closed down for good. So if they can re-group after all this time, the least I can do is leave my house for them, right?

If Ovo sounds somewhat familiar, the show was here in Los Angeles…ten years ago! I’m sure it will still be just as fabulous this go-round, but the presentation will be somewhat different, due to the venue. Back then, it was performed in Cirque’s signature blue and yellow tent, the Grand Chapiteau, at the Santa Monica Pier. This time, it will be presented as a stage show, which gives it a somewhat different look, at downtown’s Microsoft Theatre.

I admit that my affections lie with the Grand Chapiteau, and going to it is an always-magical experience, so I will miss that aspect of the adventure this time. But I did see a Cirque du Soleil Broadway musical, Paramour, a few years back, (at this point, wasn’t everything a few years back?,) and all the uber-athletic acts worked wonderfully on a stage, as well. So I have high hopes for Ovo at the Microsoft, especially now that I’ve been on their stage! 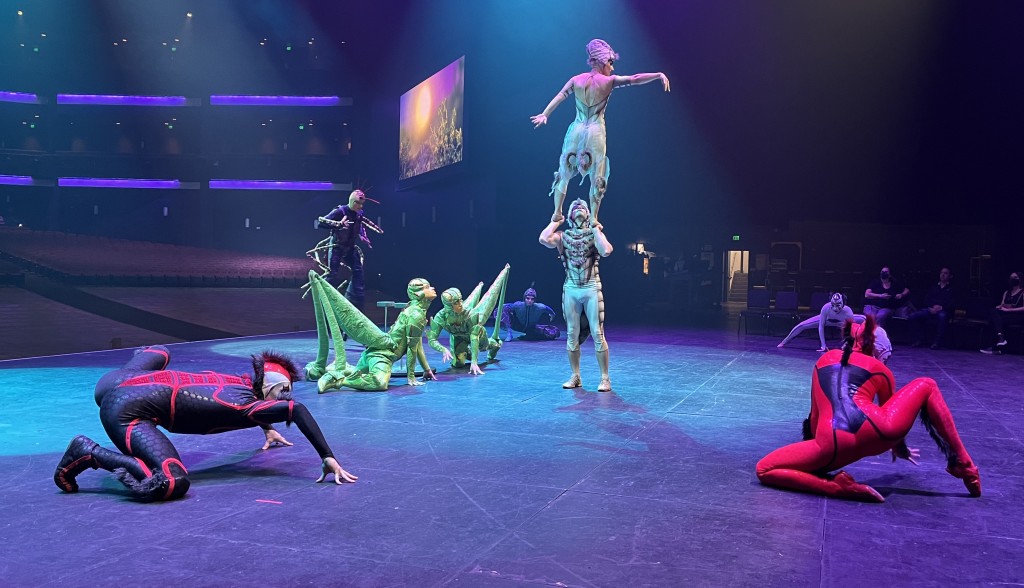 Yes, now you know–Cirque’s Media Day is what put me on the Microsoft stage last week! I’ve been on many a stage in my life, but somehow this felt special. I knew we’d be getting a preview of the show, but it was quite the surprise that we press peeps weren’t in the actual audience seats—we were right on the stage with the incredible athletes of Ovo. I haven’t been that close to circus acts since I was in one myself! So it was extra-thrilling for me. [Note: If you don’t already know about that crazy journey of mine, it’s a story for another time.]

We were treated to a brief performance by a few of the stunning acts. Then the members of the press had the privilege to individually join the gang for pictures. I was invited up right after two other media women got up there and…did handstands with the performers!!! So as I approached them, I said, “All I can do is sit,” which was met by laughs all around. (I may not be athletic, but thank goodness I’m still relatively amusing; after the past two years, I barely remember who I used to be!) 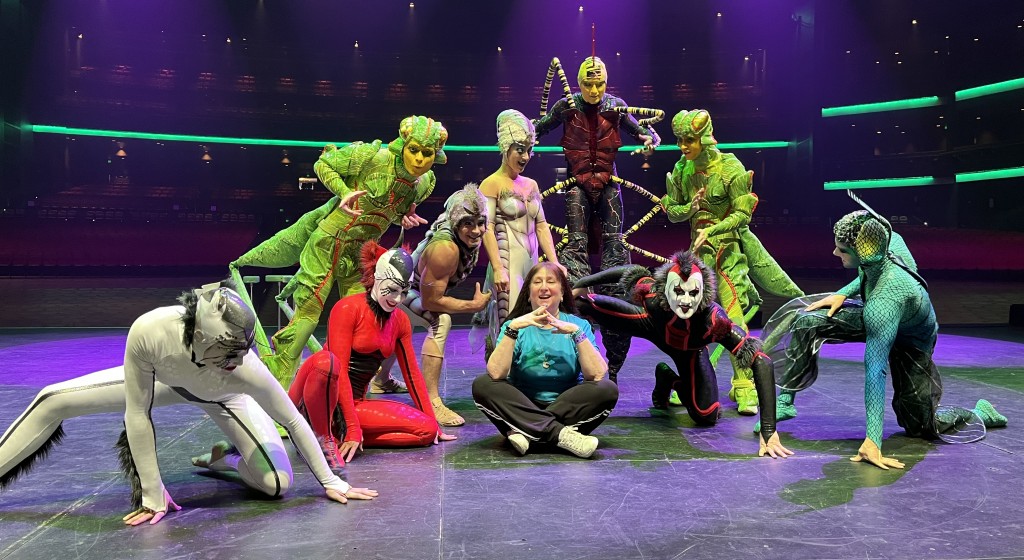 Some of the cast of Cirque du Soleil’s Ovo, still laughing at Karen Salkin’s jokes as she joined them front and center. Photo by Laura Saul.

Then we were fortunate enough to have private chats with several of the cast members. Of course, I chose all cute guys to meet with. (Have you met me???) First up was one of the Cricket acrobats, Denmark’s Christopher Sogaard, who has the most gorgeous speech! (You know that I always adore the global nature of this organization.) He told me that the absolute best day of his life, even better than his original casting, (even though he had been dreaming of joining Cirque since he was thirteen, when his friends first showed him some videos of the shows,) was when he received the recent phone call that Cirque was back on. He also gave me the shocking info that all the cast members do their own make-up, with basically their own designs, which boggled my mind because it’s all so artistic and exotic. After my self-imposed pandemic sequestering, I couldn’t even remember how to do my own mascara that morning!!! (Which you can tell from all these pix of me! My usual very camera-ready self had zero thoughts of it that morning.) 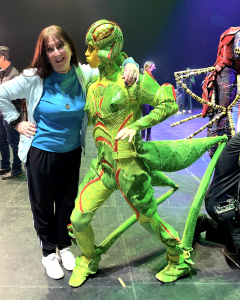 Then I chatted with Vancouver’s Domenic Taylor, who does aerials in the show along with playing the Black Spider. We laughed so much that he possibly just took over the title of My New Best Friend, especially because he was previously in Toruk, one of the most unique Cirque shows I’ve ever seen, (which, alas, he told me is permanently done. Even though I still have their app on my phone! Shame.) He explained that even though I’ve seen Ovo before, a lot of changes have been made to accommodate this different format. He even broke down some of their other shows for me—he could teach classes on Cirque!

Last up was Eastern Europe’s Mikhail Kostianov, who, as the Caterpillar, was in perpetual motion on disguised stilts for the entire two-hour event!!! No wonder he’s so svelte! (So maybe I should get on some stilts!) 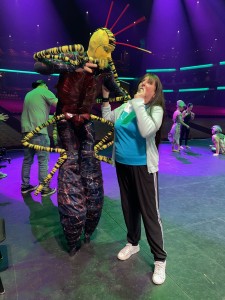 Along the way, I also spoke with two super-helpful and informative women from the organization. Cirque spokesperson, Janie Mallet, who was running the media event, spoke sooooo beautifully. And I got to practice the tiny drop of French I remember with another delightful woman, who’s from France. (I’m so sorry, I didn’t get her name, but the point is—I loved everyone there that day! But that’s how Cirque du Soleil always is.)

It was a totally fun event, but now I want more. The show opens next week, on March 16th, and I’ll give you the entire rundown afterwards.

But I already know that my review will be glowing, (as long as my seats are up-close enough to experience it the way I love to,) so you don’t have to wait to read what I have to say to get your own tickets. Every one of Cirque’s productions that I’ve seen has been fabulous, so I know this will, too.

There’s no better way to begin going out again after two years than to see a Cirque du Soleil show. So I suggest all my SoCal readers join me in starting right at the top!