Whether it’s their best show ever or even far from it, Cirque du Soleil is always magical under their signature Grand Chapiteau, (which is gray-and-white for Volta, as opposed to their signature blue-and-yellow.)

I think it’s a more intimate tent this time, so that might explain the color change. I sat near the top, on the side, and didn’t feel that far away at all! So every seat must be a good one. 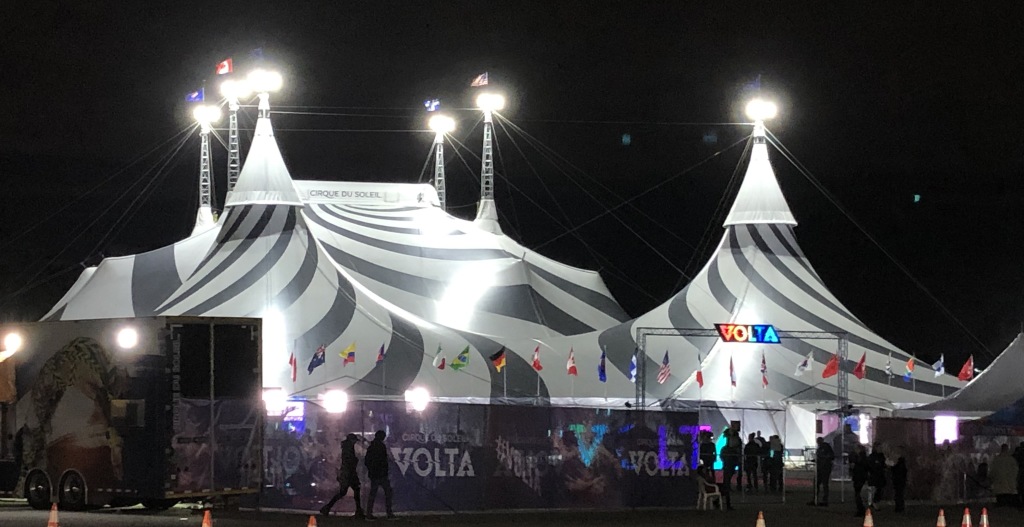 As many of you know, I’m the biggest sports fan in the world, (so please never call me during any Olympics!,) so I especially appreciated Volta’s billing as “Cirque du Soleil’s first sports-inspired big top show.” 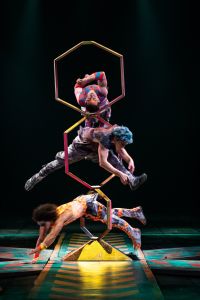 Perhaps because it had to work within those parameters, it started-out a tad slow, compared to other Cirque shows. My friend and I had a bit of a hard time getting into the spirit this time, because the first two numbers were uninspired rope-jumping followed by a girl just roller skating around by herself, without even doing any tricks! But the second half picked-up quite a bit, and by the end, we were whooping and hollering with the usual Cirque gusto!

I have a feeling that each performance of Volta varies a little (because pictures I’ve seen of the show don’t exactly match what we saw on opening night,) but whatever acts and performers you see are sure to also be special.

Here are a few of my favorites, in the order they occurred on opening night:

Acro Lamp, in which an aerialist hangs on…a lamp!, is different, in a good way. Any time I can look at abs like this guy’s is fine with me! 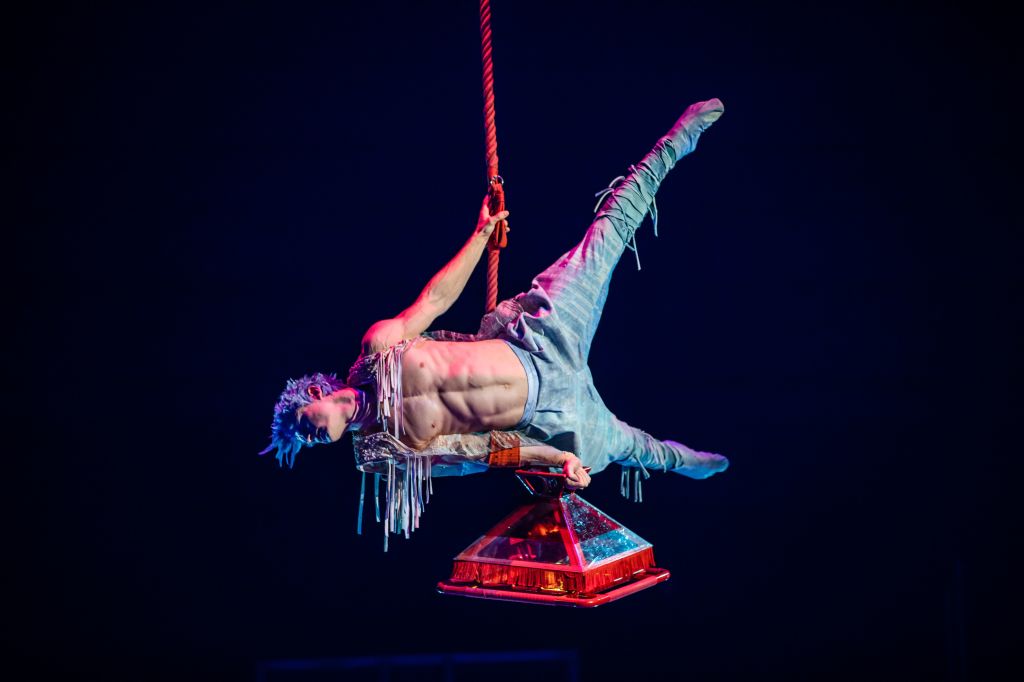 The end of Trampowall, (which I thought was named for the line-up of micro-mini-dressed chicks from my clubbing days, but is really an always-fun trampoline act,) is like the end of a fireworks display, with them all going off at once! 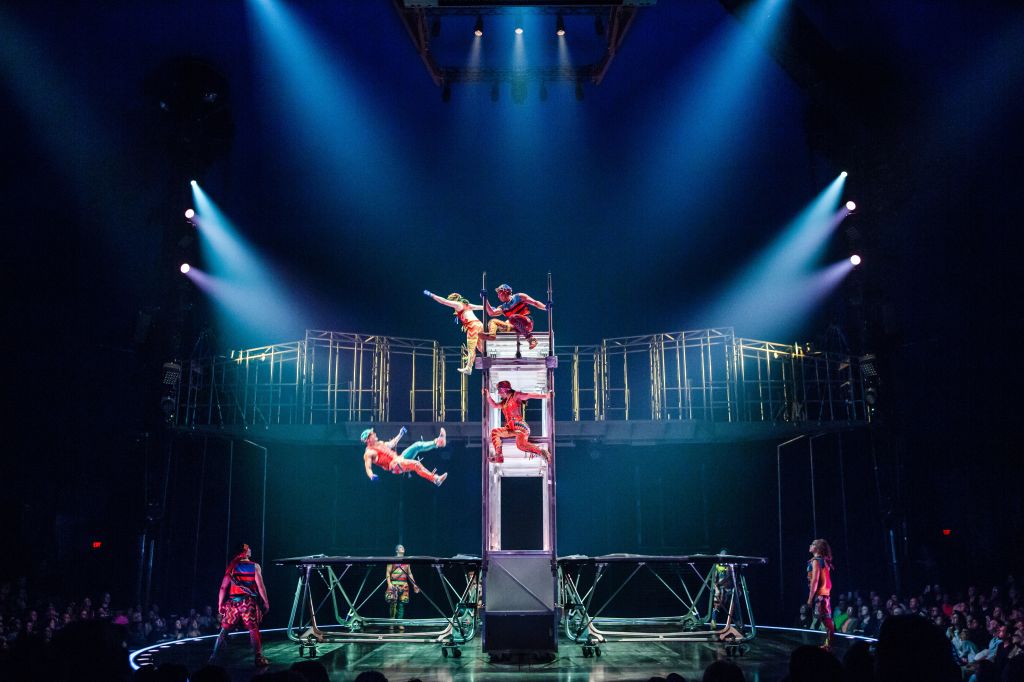 I really enjoyed the beauty of Daydreaming, a lovely blend of a guy doing bike tricks accompanied by a female ballet dancer, to the music of Finnish violinist and singer, Camilla Bäckman, about whom there’s something so ethereal. It’s a really special combination, and epitomizes the creativity of the Cirque people when putting their shows together. 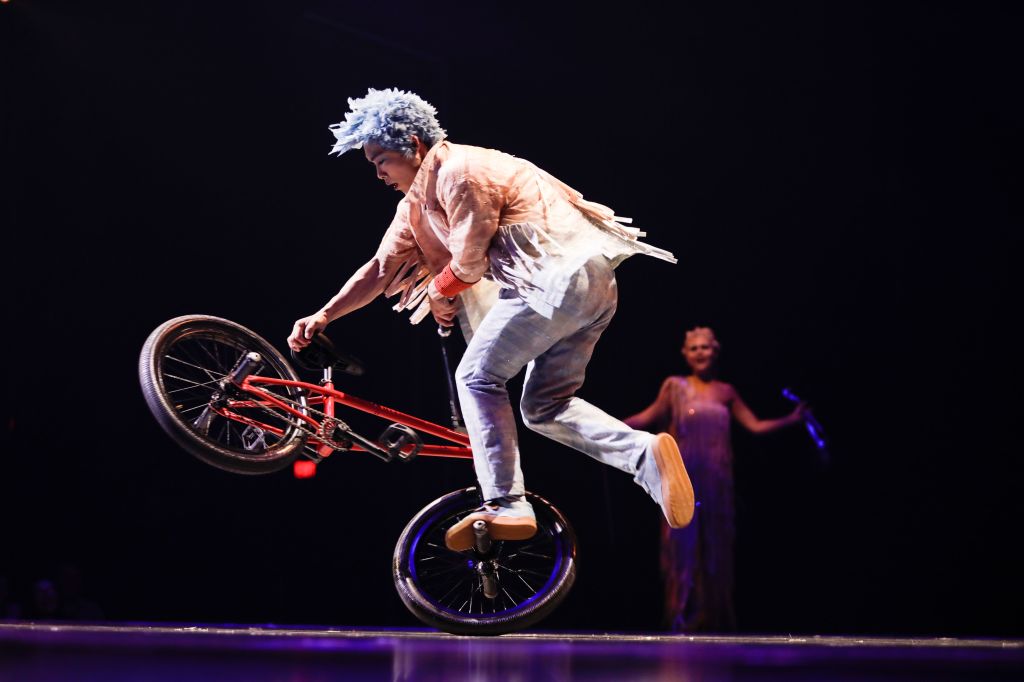 The Swiss Rings and Bungee was a lively and exciting way to end Act I. The double act seemed to energize the opening night audience, so comparing notes at intermission was fun.

And then the entire second half was fabulous! The show really picked-up right from the start of it, with a unique act on a…ladder! Then it moved onto what is billed as Shape-Diving, where acrobats dive through higher and higher rings, some at the same time! It’s really incredible. 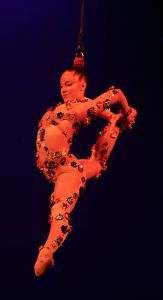 The Hair Suspension act, (which is Brazilian aerialist Vanessa Ferreira Calado being suspended in the air by…her hair!,) was gorgeous and spectacular. But the top of my head hurt the whole time just watching it!

Then came my favorite part–two hunks on aerial straps. I wonder if they’re the brothers whom I saw in the Cirque Broadway musical, Paramour. Either way—OMG! They’re what every male should look like! And let’s not forget their athletic abilities, please.

Speaking of ripped and talented men, I loved Volta’s main character’s contemporary dance number towards the end. Dance is usually not what Cirque du Soleil is about, except for filler between the acts sometimes, but this was stunning, no matter what. I could have watched just an entire show of him! [Note: I’m so sorry that I don’t know his name, but the cast list I read is confusing, so I can’t sort-out most of the performers to credit them properly.] 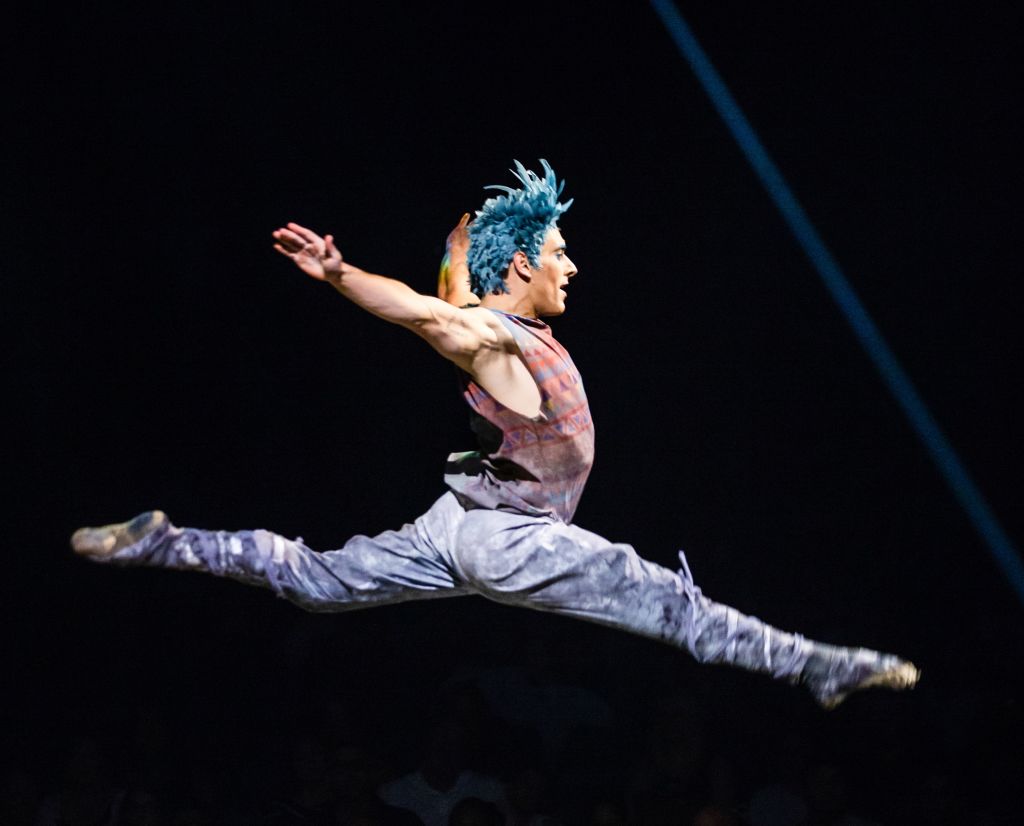 It all ended with an absolutely thrilling BMX act! (“BMX” stands for “bike motocross,” for you non-extreme-sports-fans.) I have never seen it done in such a small space before, and it pulled many of us right out of our seats. It was the perfect way to end the show. 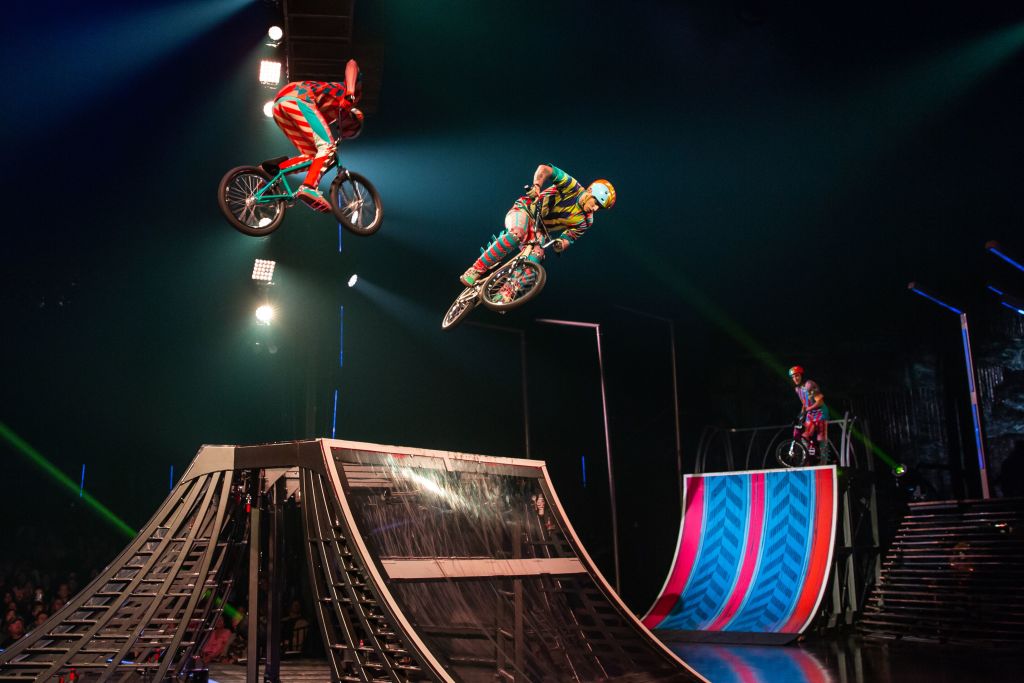 I hate to say it, but the only act I was not a fan of in any way, shape, or form is the clown. I dislike clowning, in general, (which is surprising, I know, since when I was in the circus they wanted me to become one!,) but this clown act was my least favorite I’ve ever seen. 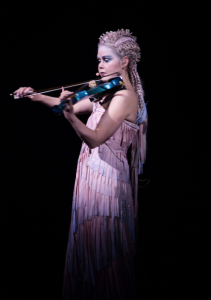 Getting back to the many positives of Volta, all of the original music composed by Anthony Gonzalez, is beautiful and hip and happening and haunting and everything good. I absolutely adored it.

I also always appreciate the multi-cultural cast. Cirque is what the entire world should look like! (Minus the crazy costumes, of course.) [Note: Since Cirque du Soleil is headquartered in Montreal, I’m wondering if all the Canadians involved can “defect” to the United States so they don’t have to deal with “Harkle” (Prince Harry and the Markle woman.) Just a thought.]

Cirque du Soleil always features some special festivities for each opening, and this one at Dodger Stadium was no different. The audience was treated to popcorn and champagne (served from a “dress” on one of the girls at the entrance!,) before the show, and fortune cookies at intermission, with fortunes like “You’re about to see something spectacular,” which is not exactly a bold prediction when you’re seeing a Cirque production!!! And, of course, we each received a clown nose on the way in—what a fun memento of this wonderful experience. 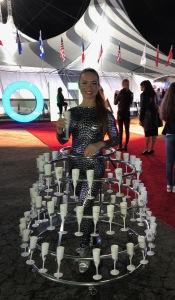 A great time was had by all. And my fellow Southern Californians can enjoy Volta, as well, at two venues in this area for the next couple of months. So be sure to get in on it while you can. Just make sure to bring a coat because it gets cold out there at night. And extra money for parking—it is Dodger Stadium, after all. (Which also means eat before you go. Unless you want to spend your life savings on hot dogs and popcorn!)

Cirque du Soleil’s Volta running though March 8, 2020 at Dodger Stadium
And then the OC Fair & Event Center in Costa Mesa through April 19, 2020
www.cirquedusoleil.com/volta