Even though I’ll always be heart-broken over my precious Clarence, I realize that it’s time to start getting back to life.  To that end, I just spent a week in New York with my little mother and a few pals, to chill. (Well, actually, more like fry in that record heat, which I hate!) 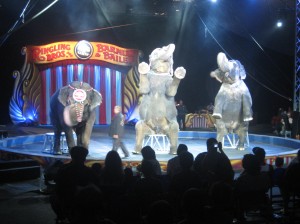 I took this shot from my seat, with no special equipment. That's how intimate this venue is!

And what better way to start enjoying life again than with a circus?! I mean it–laugh and the world laughs with you, cry and you cry alone. (Well, by many of the comments you guys left, and emails, cards, and calls, it appears that I wasn’t crying alone, so thanks again for them. You have no idea how much they helped.) But I really did need some good entertainment, and Ringling Bros. Coney Island Illuscination certainly delivered! It’s just the easiest, yet special, event–exactly what I needed.

Before the actual review, this: I hate repeating myself, but in case you missed my previous circus write-ups, here’s a quick background. My regular readers and viewers probably know by now that I ran away and joined the circus as a teen-ager. (No joke.) And, though it was not my classiest moment in life, I still always love the circus in general, and have seen as many as possible since then. And in the past year, Coney Island has become my favorite circus venue.

I brought the same kids as last year, to help me compare the two shows, and they were thrilled to find-out that it was a completely different show. I think that they thought a circus is always the same year-after-year. All three of them agreed that this show was even better than the first edition. I loved them both.

The Coney Island Ringling Bros. show is like “Circus 101” in that it’s such an easy-going, unintimidating experience, and is great for dates or an outing with pals, as well as being the perfect family fun day. I’m really grateful to Ringling Bros. for going to the trouble of mounting a show in that area to bring circus to the masses of people who either can’t make it to bigger arenas or can’t afford to bring a family elsewhere.

This Coney Island production is unbelievably affordable, (entertainment in general can get very pricey for families,) lots of fun for the whole family, and a great way to keep the kids entertained for very many hours. And, there are no bad seats under this big top, which is also perfectly air-conditioned, thank goodness. And great news for others of you in the eastern United States: this same show is going to many cities when it leaves Brooklyn, so check their site for the tour dates.

Okay, so here are some deets: This is a one-ring circus, as opposed to the three that are needed to perform in bigger venues. And every seat is basically up-close. (Of course, I still used binos when the male performers were shirtless.) The fun starts an hour and a half before curtain time, with the All-Access Pre-show, which is free to ticket holders. First, we went outside to see the animals chilling. You’ve never seen an elephant until you see one so close you can almost touch it! (But trust me–don’t. Just feel the skin of someone who’s sat in the sun their whole life, and you’ll get the same tactile knowledge.)

Then came our favorite part–we all got to sit right on the ring, and not only watch most of these very talented performers do their thing right in front of our eyes, but the kids get to participate! Actually, we grown-ups even learned how to balance a feather on our fingers, too. 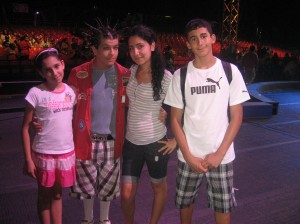 Steve, the clown, with Sharon, Betsy, and Isaac Abramova. What a cool dude--he has his hands around both girls! (And is rocking the same shorts as Isaac.) Look closely at his crazy spiky hair.

Finally, we took our seats and were treated to a fabulous over-two-hour show of pure enjoyment. Even though the magician, who doubled as the ringmaster, of-sorts, had the kind of cute guy looks I love, the highlight for me was the young Italian clown, named simply “Steve.” That was brilliant, actually, because having such an elementary moniker made it easy for all the kids to feel close to him. Every time we spied him running around the audience, we all got to say, “Hey, look–there’s Steve!” Very clever. I got to chat with him after, and because I used to be pals with David Larible, a very famous clown from Italy, we bonded over our mutual acquaintance. He’s adorable. (Steven, not David. Though I’m sure David is, as well, but you know me and the young ones!)

What I liked most about this show, in general, is that, in addition to the de rigueur acrobats, clowns, lions, and elephants, there were acts that you usually don’t find in a circus: a quick-change woman, bird and cat acts, martial arts, and magic, to name a few.

Here’s a bit of what my “junior reviewers” had to say: 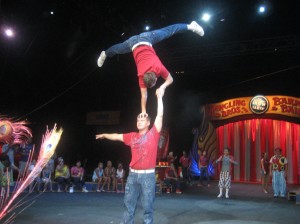 These are the high-wire brothers performing up-close and personal in the pre-show, with Steve in the background.

Sharon, 11: “My favorite act was the two brothers on the high wire. When they were jumping on top of each other, it was so scary! I thought they would fall but they didn’t. I also liked how Steve was juggling in the pre-show and I got to jump rope and got a cool red nose to take home.” [Karen’s note: the circus personnel made sure that everyone who attended the pre-show got a clown nose. I gave mine up, though, because I already have my own big nose, thank you very much.]

Isaac, 13 (but really tall!): “I liked this show even better than last year’s! My favorites were the acrobats because they did crazy stunts with the see-saw which was very interesting. The pre-show was interesting because of all the animals we got to see and got a sneak peek of the people who will be performing.”

Betsy, 19 (and my New York intern): “I really enjoyed the Illuscination circus.” [Karen’s note: we thought it was the Hallucination circus because we couldn’t believe what we were seeing sometimes! Like this next one that Betsy describes, which was girls spinning in the air, attached by…their hair!!!] “My favorite act was the two girls that were going up in the air upside-down with their hair attached to the wire! I was amazed because I couldn’t understand how they could tolerate getting their hair pulled like that. It was worth coming to the circus early for the pre-show because we got to see the animals, and met Steve, who kept me laughing throughout the whole show. I really enjoyed this year’s circus and found the stunts crazier than last year’s–I would get scared and think some of them won’t make it and than they proved me wrong!” [Karen’s note: Knock on wood to that last comment!]

I have to add my thoughts about the two girls spinning by their hair. Betsy and I both have waist-length hair, and say “owww!” if a ponytail band is pulled too tight! So we really couldn’t understand how girls can be hanging by theirs, and smiling all the way. This particular act was something different than the norm, for sure.

Add to all of the above colorful costumes, (my mouth was watering over the blue and pink ones,) excellent musicians, and tons of confetti, and you have the perfect circus experience. The only way it could have been better is if I were still being cut-up in a box. Well, better for you maybe, definitely not for me!

Can’t wait till next year’s show! It’s even worth it to me to brave the horrible east coast heat just to see what the Ringling Bros. come up with. And hopefully then I’ll remember to save some time to review their food items for you, as well. If I recall correctly, no popcorn ever tastes as good as at the circus!