The saddest thing to happen to this country in a very long time is the national nightmare that begins today, with the inauguration of the dumbest, most classless and vulgar, least compassionate, most dangerous (all by far) President we’ve ever had. But even though I have a feeling that many of you will not agree with my next premise, I’m also very sad about the demise of something else besides this nation’s democracy—the Ringling Bros. and Barnum & Bailey Circus! (I guess that now all the “sad” clowns in the world finally have something real to be sad about.) 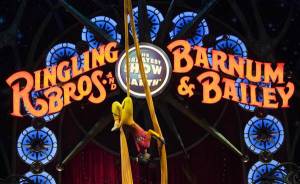 That girl on the aerial silks in definitely NOT Karen!

As a circus girl myself, I’m really a bit sick to see this iconic circus fold-up its figurative tent permanently. And after one hundred forty-six years! Problems with animals aside, I’m devastated about this.

In my brief career as The Divided Lady, (the star of the side show of the circus I was in,) I never witnessed the animals in my circus being mistreated…and I shared a tent with the elephants!!! I was very young, and I’m sure naïve, but I was friends with everyone behind the scenes, so I feel that I would have, if not noticed abuse firsthand, would have heard about it. So, yes, I do know that animals in general should be allowed to roam free, but circuses and zoos are also learning experiences for children. So, I am totally divided on that particular issue. And, at least the elephants are being protected from evil poachers, so there’s that. And this company has even had a Center for Elephant Conservation for twenty years now! So, they’re trying.) 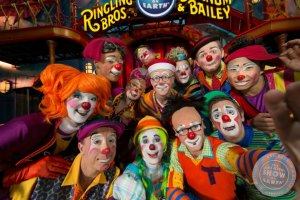 The Ringling Bros. and Barnum & Bailey Circus is a staple of all of our lives. I looked forward to it every year as a little girl in Brooklyn. Even though my teacher parents took us to more cultural experiences in a month than most other kids experience in a year, the circus was still something special. To this very day, I never knew just where to look; so much was going on at all times!

And, I never outgrew going to the circus with my family. Even though most teen-agers eschew going to “childish” endeavors with their fams, I was still desperate to see the circus. And then, when I was eighteen, and my family stopped going to it, I begged my boyfriend at the time to take me to it. But, much to my chagrin, he turned me down. (No worries, though–as a grown-up wonderful friend, he’s more than made-up for that big blunder. We even laugh about it now.) 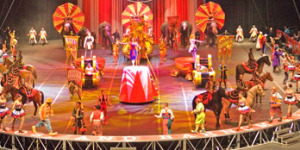 One of the Ringling Bros. shows I reviewed a few years back.

So, then I came out to Los Angeles, still as a teen, and, after a few months, I got offered that aforementioned job in the biggest traveling big top circus. [Note: Ringling Bros. is not labeled a “big top”—it’s contained in enclosed giant venues, such as Staples Center in L.A., and Madison Square Garden in New York City. (But I did see one of their companies in a one-ring tent in Brooklyn a few years ago. Here’s what I wrote about it, in one of this e-zine’s earliest reviews: itsnotaboutme.tv/news/coney-island-boom-a-ring-circus. And then this even better one, a year later: itsnotaboutme.tv/news/live-production-coney-island-illuscination.)] 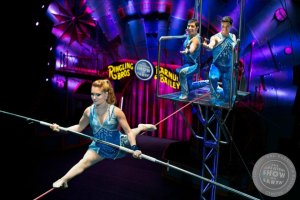 I was still deciding whether or not to accept that offer, when I got word from a pal back home that my now-ex had taken his new girlfriend to the circus in New York!!! So, I figured, “Yeah? I’ll show him!,” and I accepted the offer, and, at the end of my teens, joined a circus myself!!! Take that, Manny Hymie Greitzer!

It was a short-lived experience, though, made odder by the fact that the man who cut me up in the box begged me to marry him, and that the “silent” clown (a man I found-out had tattoos and no teeth) followed me around. And there were so many other situations that a young Jewish girl from an academic family in Brooklyn, New York should have never gotten herself into. 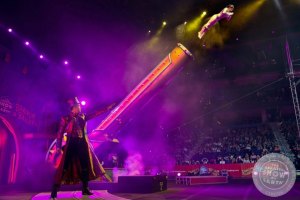 But those are all stories for my always-promised book. This column is my lamentation of the end of the Ringling Bros. Circus. I feel the worst for the thousands of employees who are now left jobless. Many of the performers will find it hard to get employment elsewhere. Clowns can maybe do something else, (like go around frightening folks,) but acrobats and their ilk will find job-hunting very difficult. After all, “flying on a trapeze” and “walking on a tightrope” don’t come up very often in job descriptions. And many of these people have grown-up in the circus–it’s their life! I’m sorry to PETA, but I really do care more about the people who will be displaced than about the trained animals. I value them both, but humans have to come first for me. 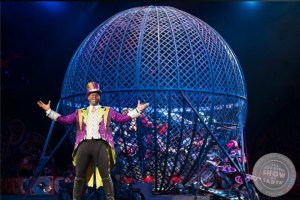 Hopefully, many of them can join another circus, or that type of show, such as Cirque du Soleil. You know how in love I am with all things Cirque, but that’s not a real circus to me. Even though I’ve never really enjoyed animal acts, of any kind, it’s just not the real circus to me without them. A true circus has animals, danger acts, sawdust on the floor, clowns, and a Ringmaster. (And actual rings! Duh.) I love all kinds of circuses, but to think that the grandaddy of them all, Ringling Bros. and Barnum & Bailey, will be no more, is making me really sad. (I’m actually tearing-up just writing this!)

I hope to go to Providence, Rhode Island in May to see the last performance of one of their two traveling shows. And maybe even stay on the east coast for another two weeks to see the other one conclude in Long Island.

But even if I don’t make it there physically, (though I will be trying my best to get there,) you know that I will be at both shows in spirit.

So, to you Ringling Bros. and Barnum & Bailey personnel, I thank you profusely for all the beautiful colors, vibrant and exciting performances, and most of all, the happy memories. Best to luck to all of you, wherever you land.

[You can read the full heartfelt message from the CEO of Feld Entertainment, whose family has owned this circus for about a half century, and also see the final tour dates, here: www.ringling.com.]