I’m in New York for Passover for the first time in many years. I think I was here just one other time since I moved to Los Angeles as a teen-ager!

That one time was about ten years ago. Even though my little mother was far from a Jewish holiday aficionado, I figured it was time to give her a fun Passover. 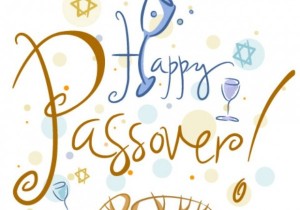 It turned into a two-day event that she and I chuckled over for years after.

On the first night, we joined her older sister, (with whom she had a [rightly] contentious relationship forever,) and my cousin, for a seder at…my aunt’s nursing home! Not that festive of an event, but we made it so. My cousin brought only a half bottle of wine, because she knew that my mother and I don’t drink. When her mother asked for some, the daughter answered, “No! It’s all for me. I need it!” We were hysterical.

Even though the surroundings were less than ideal, the meal was actually quite delicious, and I was thrilled that my mother enjoyed it. But more than anything, I was happy that my presence had made it a fun occasion for all concerned. That’s the way it should be.

The next night, I had the brilliant idea to make a seder at my mother’s house! I always wanted the homestead to feel alive and hectic while I was there, so that my little mo would have a brilliant month, and then be so exhausted when I left town that she’d be too tired to be as sad as she always was without me.

So, we had two couples over for the seder; one was more my friends, and the other more hers, but we always blended our posses. That quartet had met before, and all lived close to each other, so it was a very congenial affair.

Now I can hear some of you thinking, “Karen cooked???” (Yes, I’m talking to you, the Rampino girls!) But–of course not!!! Are you insane? I ordered food from various delis all over town; the various part is because I didn’t want it to feel like a meal the others could have just gone to one of those delis for!

But there were two big problems I hadn’t counted on. The first came when I went to heat-up the chicken soup. I discovered that…my mother had given away all our pots!!! She figured that she didn’t cook, and I don’t often cook, so why still have them? (She had forgotten that she had already given them to Mr. X, whom she always called her “favorite relative.” But he and I wanted them to stay put in her house, until the house was no more, so we left them there for the time being. But, because she had forgotten, and was always a bit too generous to everybody, she had given our old, beautiful pots (that we really loved,) to our neighbors, thinking they were poor and needed them. But guess what they did with them? Put them outside for the outdoor cats to eat from! OMG!)

But that’s a story for another time. Back to the soup. With the guests due to arrive in just a few minutes, I asked Maybelle where the pots were, and she answered, “I told you we didn’t have any.” I thought she was just saying that!

I finally found a tiny, tiny pot, and had to heat-up the soup one bowl at a time! Oy vey.

So anyway, we had a really lovely evening, even though as we sat down to dinner, I realized that I had to serve everyone everything!!! Another OMG. 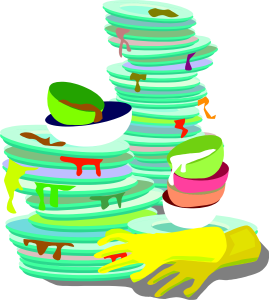 I served, entertained, and cleared. As we moved to the living room for post-meal chitchat, I saw the dishes piled super-high in the sink. And then it dawned on me—guess what else my mother had gotten rid of, in addition to all the pots and pans? The dishwasher!!! Have I mentioned OMG?!

I would never let my guests do anything to help, but guess what? They didn’t even offer!!! So I nervously pondered how many hours it would take me to do the dishes, a task I had rarely ever done in my whole life! But, I didn’t think that, as the hostess, I should spend the rest of the evening in the kitchen. So, I hung with them all in the living room, as the evening droned on…and on…and on.

When they didn’t get the clue to leave, (I do throw a mean party,) my mother finally gave up and went to bed, leaving me to deal with four tipsy chat-sters. Oh, how I envied her!

After another hour or so, (they’d now been there for almost six hours!,) I finally said that I had to go wash the very many dishes. And you know what they all said? “Go ahead!” No offers to help. Or to leave!

After an hour alone at the sink, I finally went back to the living room, and said I was exhausted and had to call it a night. They reluctantly left, and I went upstairs to bed. When I heard my mother’s contented little snores, I knew it had all been worth it. And, to my comedy mind, almost everything is worth it if it makes a good story.

So, that brings me to this year. I opted to be back in New York for it because I received a lovely invitation from a pair of siblings (not mine, of course,) I’ve been friends with for over half my life. And it’s in a beautiful large apartment on the Upper East Side, which I’m sure will make me feel like I’m in a movie. Let’s just hope it’s not a Woody Allen film! (Not because of what I believe are false accusations against the director; because a scene in one of his films almost always means a disaster is taking place. At least it will be a humorous one!)

I wish a very Happy Passover to all who celebrate it! (I’ll get you Easter peeps later on in the week.)