Mr. X and I are in  the New York blizzard right now, enjoying time with my little mo, which I’ve rarely ever done in December or January. But I figured it was a good place to rest up for my January 14th birthday, although I don’t feel much like having a party this year. (And I’m hoping to take a week off from writing, so don’t be alarmed if I don’t post until January 10th, but you never know if I’ll really be able to take my hands off the keyboard.)

I’ll tell you all about our east coast shenanigans when we return to Los Angeles, but now, since I’m off my regular routine, I’m re-printing part of last year’s New Year’s column to remind myself what to do, as well as you.

I hope these routines work for all of us. Here you go: 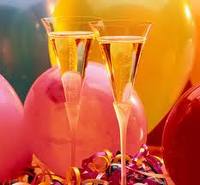 I’m pretty superstitious, especially about things that bring good luck, like always knocking on wood if I even think something good! (FYI–you can always knock on your head three times, if no wood is around.) There’s one ritual I do every New Year’s Day and another I do EVERY MONTH! At the risk of having you all think I’m completely bonkers (like you didn’t already?), I still want to share them with you, my loyal readers, hoping some of it works for you, too. (Unless you’re wishing something bad for ME. Bite my tongue! Which I did as I wrote that. How does Mr. X stand it???)

Okay, the special New Year’s trick is to eat black-eyed peas on January 1. They can be canned, frozen, fresh, whatever. (Is there even such a thing as fresh ones?) You can eat as many or few as you like, cold, hot, anyway. I just heat them up, throw on some seasoned salt, and choke-down about half a cup of those suckers. It’s once a year–you can stand it.

This one I kind-of hate to tell you, but I’m hoping you all deserve some good luck. Here goes: it’s called RABBIT. There are a couple of ways to do it. First up, the specific wish. On the last night of every month, as you drift-off to sleep, think of the wish you want to come true and don’t talk. In the morning, the first thing you must say is “Rabbit.”

The other way is for good luck that whole month, so I do them both. When you wake-up on the first of each month, kind-of pop-off the end of the bed (I just schooch down to the end with my butt and gently propel myself off) while saying “Rabbit” three times. (I’ve heard it as 1, 2, or 3 times, so I just go with 3 because that covers all bases.)

I know you guys are probably just scratching your heads over all this info, but trust me on this one. I’ve been doing it since I was a little girl and I really do believe in it. I used to put a sign by my clock to remind myself, but now I just put a little stuffed rabbit there instead. So much more fun to wake-up to than paper.

Try it and see. It’s worth a shot. Best of luck with it, and please let me know how it works-out for you.