While most of the sports world’s recent focus has been on the NCAA Championship, baseball’s opening days, and the play-off races in the NBA and NHL, the Figure Skating World Championships have seemed to slip through the cracks. That’s such a shame, not just because skating is my personal favorite sport, but also because this year’s competitions were the most exciting since the days of Nancy Kerrigan and Tonya Harding! And, for the first time in a very long time, three Americans took medals!!! Yay!

So, let’s get started on what I’m sure most (if not all) of you missed! [Note: I’m doing it in sections, to make it easy for those of you who are interested in only certain disciplines.]

The overall great thing is that most of the Americans, (outside of Gracie Gold and the two pairs,) skated their absolute best. Even better is that most of the top skaters from all the countries did the same. These were four beautiful competitions, all the way around. Even most of the commentators didn’t annoy me this time! (Except that usual wonderful Tracy Wilson made so many mistakes, more than a few being major ones, that I’m a bit worried that something’s wrong with her.)

Speaking of the commentators, (before we move on to the actual skating,) the best one was newcomer to the broadcast biz, Ben Agosto, who was a medal-winning ice dancer with his partner Tanith Belbin. I’ve met him several times throughout his competing years, and he was always the nicest, most pleasant one. So, I’m very happy to see him have success in his new field. 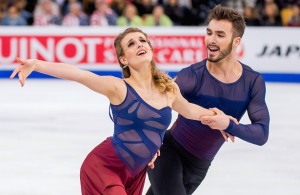 Champions Gabrielle Papadakis and Guillame Cizeron. (The two American team medalists are flanking them in the big picture at the top.)

First up was the Ice Dance competition, which could not have been tighter. To the naked eye, each couple’s program looked gorgeous and fabulous, and it’s hard to see just who is actually the best. But the judges got the top three correct. The American siblings, the Shibutanis, would have definitely won it, had it not been for the French team, Gabriella Papadakis and Guillaume Cizeron, whose major surge through the ranks last year made shockwaves in the sport. Their skating is among the most gorgeous of all time! So, they took the gold, the Shibs the silver, and the bronze went to a second American team of Madison Chock and Evan Bates. I don’t think this country has had two medalists at the same World Championships in a very, very long time, so this result was wonderful. Congrats to them all. 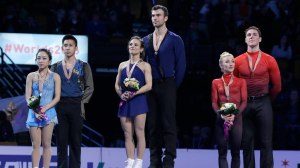 The pairs was nothing to write home about for the Americans, but, again, the top three were a joy to watch. They were all exciting, especially the gold and bronze medalists, who were all in their thirties! That’s amazing since ice skating is primarily a young person’s game. This was the first time all year that defending champions Meagan Duhamel and Eric Radford had done perfect programs. They, once again, deserved their gold.

But I was most interested to see thirty-two-year-old former World Champion, Aliona Savchenko, who returned to competition for the first time in a year and half…with a new partner! And, in only their second real contest together, she and Bruno Massot took the bronze. That girl is a little powerhouse!

One of the things that made her return so interesting is this: Years ago, she was brought to Germany, from her native Russia, to skate with a German guy, Robin Szolkowy, for that country. After five World Championships and two Olympic bronzes together, Robin decided to retire in 2014, and became a coach…for Russia! Now real Russian Aliona is left competing for Germany! And her new partner is full-on French! It’s all so weird. 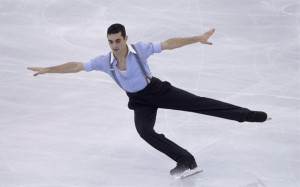 The Men’s competition seemed all but decided after the Short Programs. Olympic Champion, Yuzuru Hanyu, of Japan, was twelve points ahead of defending champion, Spain’s Javier Fernandez. For you nescients, that’s an impossible lead to overcome, especially against Yuzuru, who set all world records this season with those programs. On top of it, the two guys are training partners and good friends. They see each other every day! 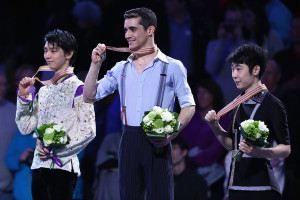 So, Yuzuru skated a superior long program, but with a few glitches. Still, he had a lead of a dozen points! In skating, that’s like a fifty point lead in basketball! And Javi had to skate after him. To win, he’d have to skate the absolute most incredible program ever. And guess what? That’s just what he did!!! It was truly amazing to watch. He did a trio of spot-on quads, and the showmanship of his Guys and Dolls-themed skate was just perfect. The crowd, (and I, too, of course,) went wild. I really don’t remember seeing anything like it before. Javi must be the most mentally stable guy in sports to have accomplished the impossible like that. 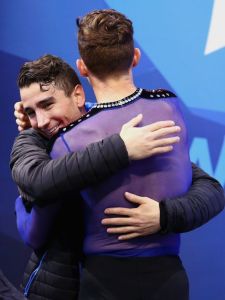 And, along the way, the top two American men, Adam Rippon and Max Aaron, skated their lifetime best long programs, as well. The whole thing was a joy to behold. (And the genuine happiness those two had for each other made me cry, of course. That camaraderie is so different from that of the girls.)

But I do have a major bone to pick with the NBC coverage. I really appreciate that they went deep into each discipline, showing us more than just the top six or so skaters. So, we got to see most of the Americans, even if they were far down the results list. If we were viewing the latter parts of the competitions live, they even went back to show us the lower-ranked Americans on tape. Except in one case. 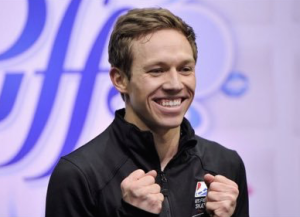 They never once showed the third guy, Grant Hochstein! How rude of them! They didn’t even mention him until one brief sentence at the end, to tell us he had come in tenth, which is more than respectable, especially in his first Worlds, and as an alternate! They showed us the skates of the tenth place American girl, Mirai Nagasu, (whom I love, by the way,) the ninth place American pair, and even our thirteenth ranked pair!!! So, why no Grant Hochstein??? That doesn’t even make sense!

They never even showed a picture of him! (So I am!) He’s actually the luckiest one there, anyway, because just two days ago, he got engaged to fellow skater, the adorable Caroline Zhang. I’m wishing that couple every happiness 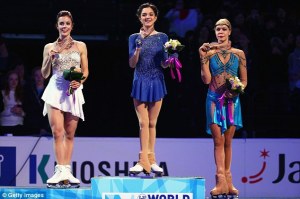 Ah, we finally come to the discipline I most want to discuss! It’s always the last one contested because it’s the glamour event, and this year, it was also the most exciting. The US had not won any color medal at the Worlds in ten years! And the commentators always make like our girls really have a chance, when in fact, they really don’t. Years ago, it was the Japanese girls taking over, and in the past couple, it’s been the little Russian phenoms. That team is so deep that the biggest deal Russian girls, including last year’s World Champion and the most recent Olympics one, didn’t even make their country’s top three this year!!!

So, after the Short Programs, it was a shock to see America’s Gracie Gold in the top spot. The idiot commentators made such a fuss over it. Tara Lipinski even declared the gold medal hers!!! Before she even skated the Long Program! How moronic. Not to mention misleading. That was just stupid of them. Gracie had not skated both programs well at any competition in years, outside of the recent National Championship, which she did deservedly win.

So, after the Shorts here, she was in first, followed by a trio of the young Russians and then another American, Ashley Wagner, Gracie’s arch-nemesis. But all the TV peeps talked about was Gracie.

The two Russians skated great. They were temporarily holding the top two spots, with only the two Americans to go. First up was Gracie, whom Tara and Johnny Weir had all but anointed the Champion. And then—she was a mess. Not only did she flop right at the beginning, but her whole presentation was slow and lackluster, (as her talking is, too. That girl has the personality of an off-white piece of paper, because even a white sheet would be more exciting than she.) So, of course, she fell to third, temporarily. But, if she had received even the bronze medal, she would have been hailed as a hero. Remember—no medals for the US women in a decade! 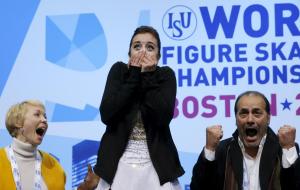 The reaction of Ashley Wagner and her coaches, upon learning she won the silver medal.

So, the all-but-forgotten, always-falling Ashley Wagner finally got her turn as the very last skater of the entire week. What a spot to be in. Oysh. And guess what? She skated her absolute best ever!!! Mr. X and I don’t like her, either, but we were totally rooting for her. And she wound-up with a much-deserved silver medal! After never even coming away with a bronze! It was really wonderful to witness.

And the two Russians were great, as well. The bronze medalist, Anna Pogorilaya, is usually an also-ran, but she, too, skated her best ever. And the new Champion, Evgenia Medvedeva, is an absolutely stunning little skater. She came out of nowhere this year, at just sixteen. (But—don’t get used to her. Remember what I told you happened to the two previous Russian Champs. We never know just which girls will make it to their top three in any given year.)

So, there you have it! I had really planned on writing just a couple of paragraphs on the proceedings, but it was all just so exciting that I could not help myself. I wanted those of you who had missed the broadcasts to experience even a little bit of the drama though me.

Now, if only Champions On Ice was still in existence, we could see all this brilliance live. Hopefully, in the next few years, there will come another showcase for these amateur skaters. Maybe if we collectively wish for it, they will come.