I think that you all know by now just how ice-skating-obsessed I am. So I was happy to be invited to the opening of the Pershing Square Holiday Ice Rink. I hadn’t attended it in several years, (because of my back issues; I didn’t want to be tempted to get out on the ice,) and this ceremony was even more fun than previous ones. 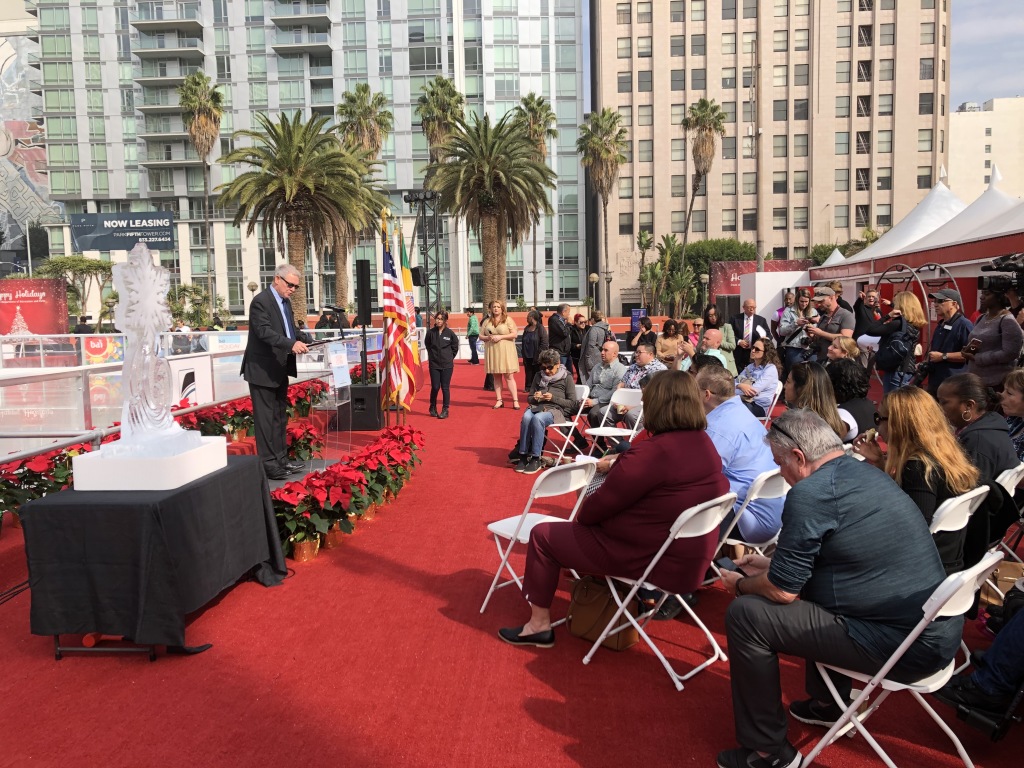 The official opening day welcoming. Photo by Karen Salkin, as is the one at the top of this page.

I loved seeing the virgin ice sparkling in the sun like that! The entire area is gorgeous!

And the program had so many wonderful surprises! There was one right after the other. 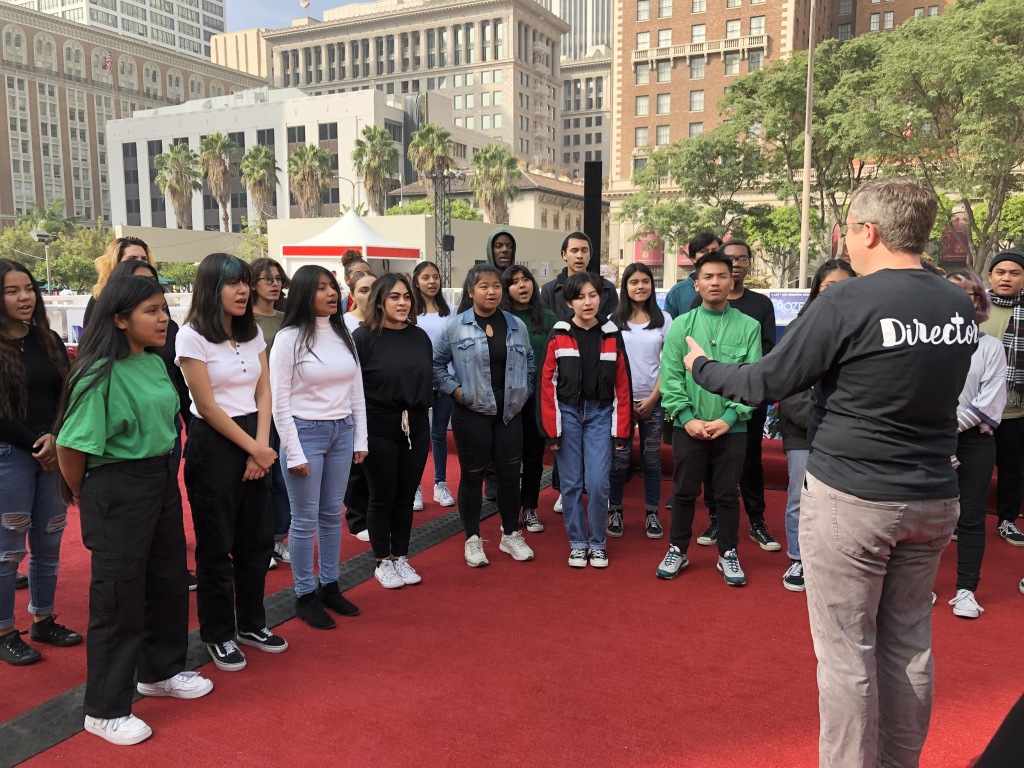 First of all, we were greeted by an attractive colorful buffet. Being fed is always appreciated by the guests at events such as this one. I’m not a morning food person, (or morning anything person, actually,) so fresh fruit and pastries were welcome treats. (I passed on the hot e-word dish, of course.) 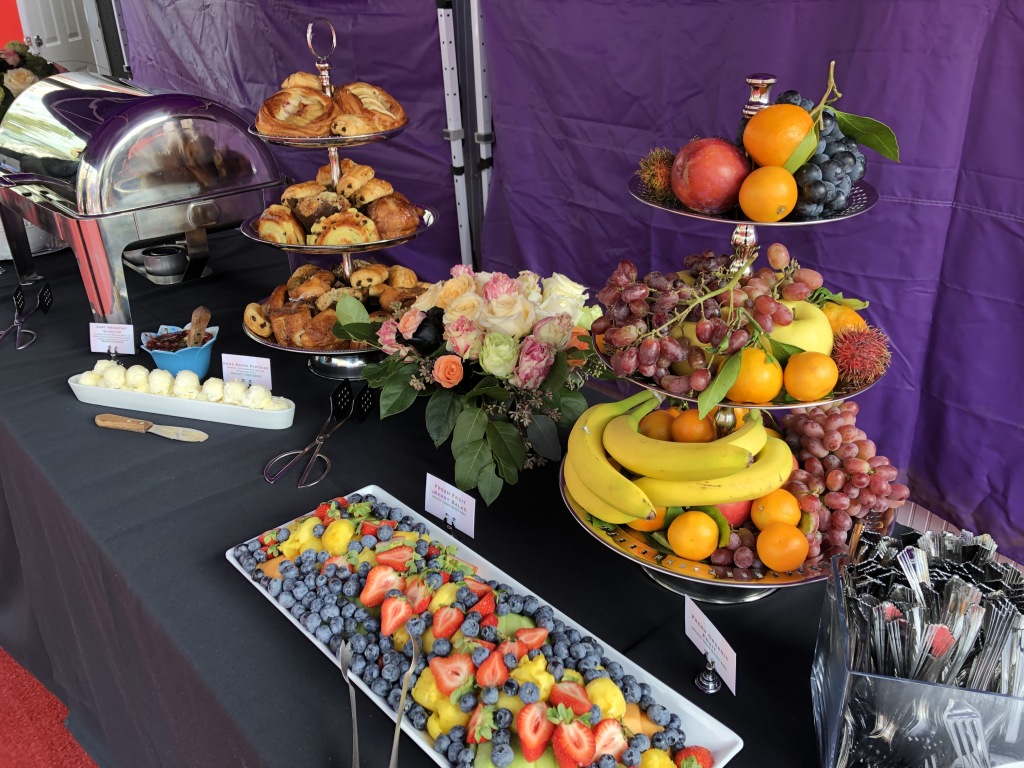 Even better than the repast were the many entertainers. First there was a choir of underserved area school children, and then Sarah Salazar, (from the fabulous local Verdi Chorus,) sang a beautiful National Anthem.

Next came Cornell Freeney doing his tricks on a German wheel; I totally get why he’s been National Champion on that apparatus four times! 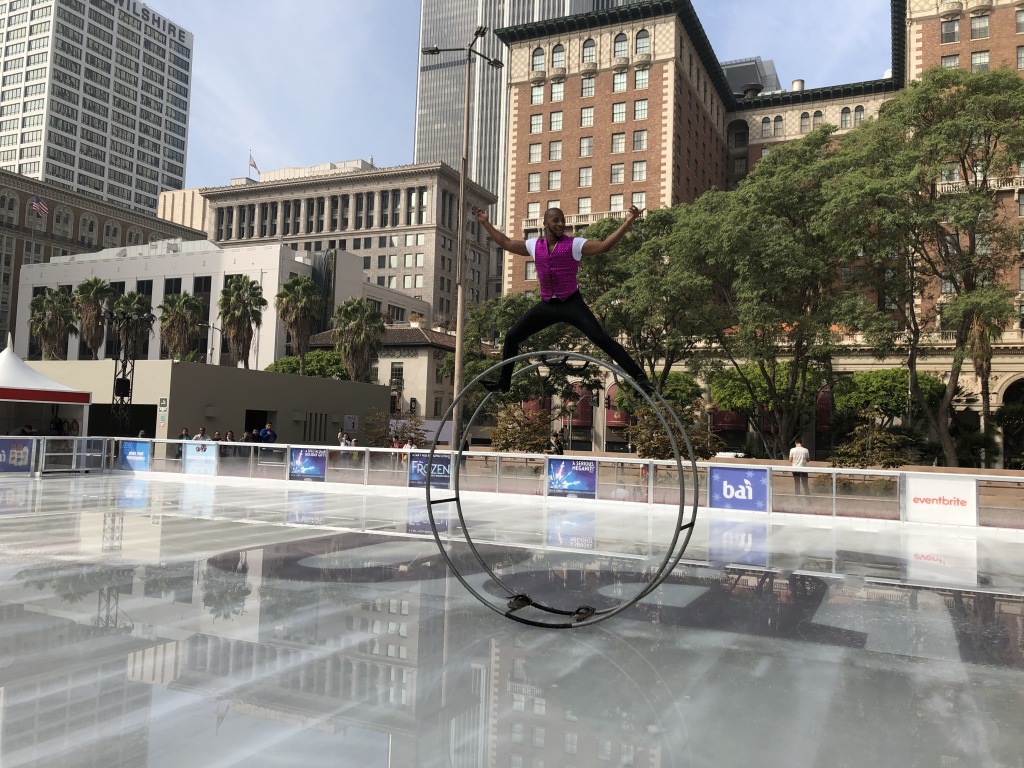 A big surprise for me was seeing two-time United States Pairs Champions, and married couple, Alexa and Chris Knierim, perform so up-close and personal. What a gift that was! Skaters, especially pairs, are like magic to me. 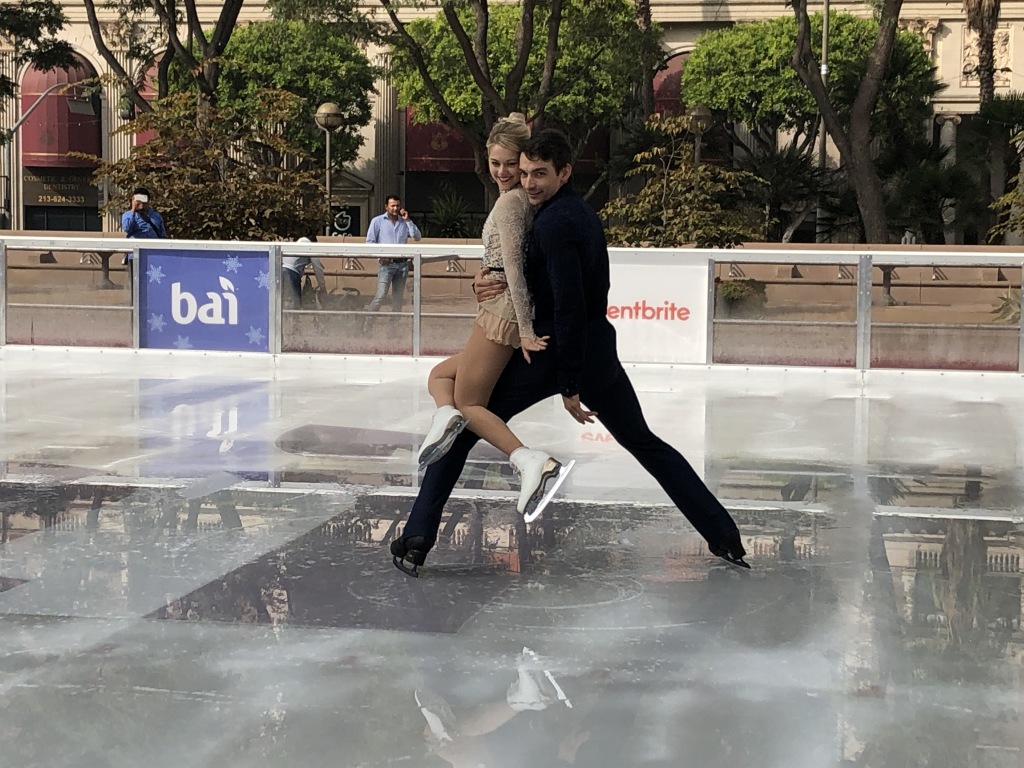 The Knierims. Photo by Karen Salkin.

Then a quintet of ladies took the ice for a lovely group performance to Let It Go, sung by Alyssa Fox from the Broadway company of Frozen. That was a beautiful moment, all the way around. [That’s the skaters in the photo at the top of this page, taken by Karen Salkin.]

And who better to close the show than everyone’s favorite beagle, Snoopy? Who knew that guy can skate? Is there nothing he can’t do?! (Except speak, of course.) 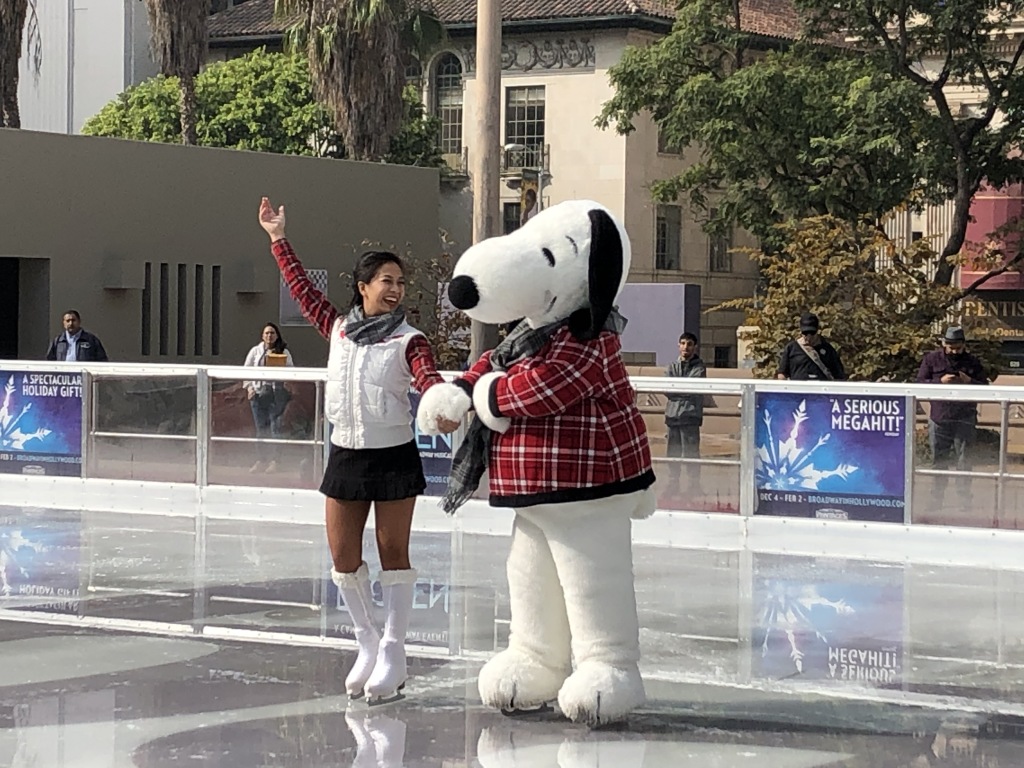 But what I enjoyed seeing most that day was the smiles on the faces of the non-performing guests who were invited to skate when the show portion of the “icebreaking” was over. Hardly any of them can really skate, and most were doing what I always do—just going along at a snail’s pace, holding on to the railing. (At least I do an arm flourish, though, every time I pass the “audience!”) But every single one of them was having a blast! I really wish I could have joined them.

But all of you can have that same fun right now! The Holiday Ice Rink will be open for almost another two whole months! 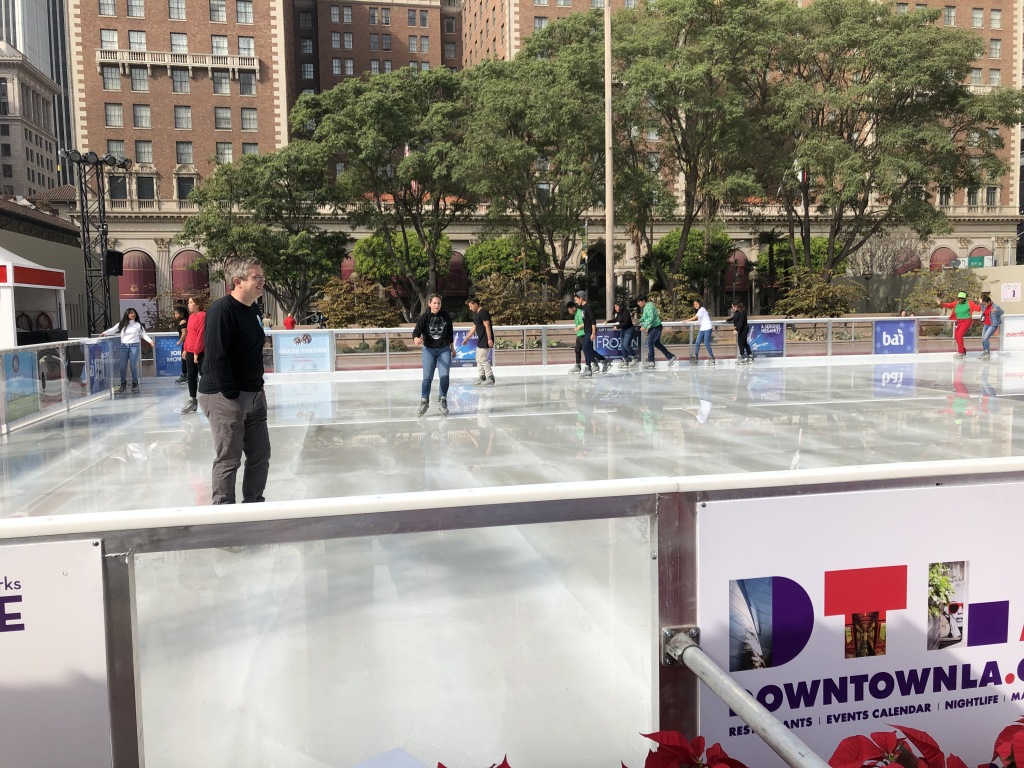 Some of the guests skating. Photo by Karen Salkin.

In addition to enjoying just skating, there are many special events planned at this downtown LA rink. There are Learn to Curl nights, a DJ on most Thursdays, and even one Silent Skate Party! (Mr. X invented the “Silent Dance Party” about two decades ago, so I love seeing others keep up that tradition.)

Tuesdays will be dedicated to Frozen, with its music, and colors in lights, (and maybe even what the skaters will become while out there on the upcoming chilly nights!) There will also be free Winter Music Concerts in the surrounding park, and a Winter Holiday Festival on December 7th and 8th, (two nights that I’m, unfortunately for my skating-and-festival-loving self, already quadruple-booked!)

Ice skating is the perfect holiday activity. So get out there and spin already!