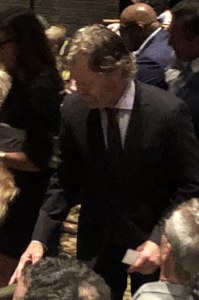 The man walking to his seat. Photo by Karen Salkin, as is the one at the top of the page, of the duo standing up after the show.

You have to read this entire article to get the full impact of what I’m about to tell you. (I wish I had better pix of it to share, but there was no way to take them. You’ll see why in a second. But I do have at least one other eye witness.)

Just the other day, Mr. X and I were joking about that he should be more affectionate in one tender moment.  I had come home from a long hard day out, and as we collapsed on the bed together, I was telling him that he should be tenderly rubbing my arm and kissing my head.  So, instead, he kept making me laugh by doing weird kisses and knocking on my arm like on a door.

The laughter was so much better than what I had been requesting. But still, when I was at a theatre the very next night, (a mere twelve hours prior to this writing, actually,) and noticed that the couple right in front of me could not keep their hands off each other for the entire two hours, I paid rapt attention. (And this place is very close-together stadium seating, so I could see their every move perfectly, which I now wish I had not been able to! I’m really regretting that no one has invented a memory-erase pill yet!) 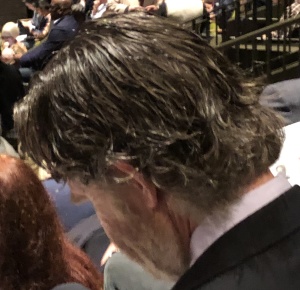 Look at the filthy hair on this man. Photo by Karen Salkin.

They continually massaged each other’s hands, (and not in a therapeutic way,) the man occasionally rested his hand on the girl’s thigh, her head kept resting on the man’s shoulder, and she even ran her hands through the man’s absolutely filthy, product-laden hair! At one point, he even took off his shoes and put his knee on her leg so he could massage his own feet!!! Gag me with a spoon. (Although you didn’t have to because I threw up in my mouth a little when he did that uber-piggy move!) The guy next to him had to move forward in his seat because the foot was so near his face!!!

I was aghast at all of this weird and rude public behavior to begin with, but then I realized that it was troubled-home-life actor Willian H. Macy and…not his prison-bound wife, Felicity Huffman. So I paid even more attention because I thought I had an exclusive on an affair to share with you today.

But no—it was not an affair at all—it was so much worse than that—the girl was his teen-age daughter!!! That is so beyond ewwww. I swear—it was like one of those Saturday Night Live skits where the entire family makes-out with each other. Now we know why Felicity begged for a short prison sentence; she doesn’t want to leave those two alone for a big chunk of time! 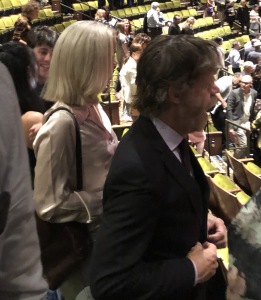 I promise you—this was the creepiest familial display that I’ve ever witnessed. The girl is not a young teen, who might be tired so she has to lean on her parent because she’s falling asleep—this girl is closer to twenty. To be clear, I so admire when fathers are affectionate to their little girls, but this was nothing like that—it was more than I’ve ever seen any couple do in a public setting. I was actually embarrassed to be witnessing it so up-close. At first my friend and I were like “get a room” about it, when we thought it was an affair. But when we realized it was a man and his child, we were literally shocked. And repulsed. And if this is what they’re willing to do in public, I shudder to think what goes on behind closed doors!

How would a man who’s in the public eye to begin with, and under so much scrutiny at the moment, especially knowing that his family’s every move is being reported, not have better sense than this??? The whole unfortunate episode is just mind-boggling. I can’t wait to read the book that girl will write in a few years, if you get my drift!

But one good thing came out of it for me—the play was not great, so at least I had a more interesting show to watch!