Trending
You are at:Home»AWARDS SHOWS»AWARDS SHOWS: THE OSCARS 2016—PART II: THE ARRIVALS SHOWS
By Karen Salkin on March 2, 2016 · AWARDS SHOWS

This year, there was a quartet of arrivals shows before the Oscars. Obviously, I couldn’t watch all four of them at once (although I did try for a little while.) So, I finished them up yesterday.  (And Leo and Kate greeting each other on the red carpet, above, is one of my favorite sights from that night.) Here are my impressions, in the order I watched them:

LOCAL ABC ARRIVALS, WHICH THEY CALLED “ON THE RED CARPET” (unique title—not!) 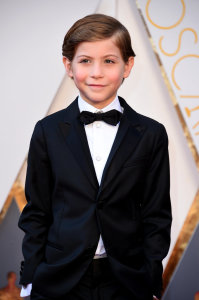 Host George Pennachio asked songwriter Diane Warren, of songwriting partner Lady Gaga, “How did you two jiVe?” He, of course, meant “jiBe,” unless he was wondering how they danced. And he has a job on TV! Oysh.

No one has made me smile more this entire season than little Jacob Tremblay. He just melts my heart. And I’m not really a fan of children, in general, and especially not actor ones.

George Miller, the director of Mad Max, seems like an adorable person. And I just found out that he was a doctor! [Note: I’ve since researched him, and am shocked at how prolific he is, without me ever hearing of him before! My bad. My big bad!] 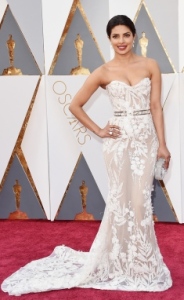 Priyanka Chopra looked gorgeous, and sure knows how to pose. She seems so nice and genuine. And she’s just naturally good-looking. She doesn’t appear to be trying harder than she naturally is, I think. But why is a TV actress, especially just a recent one, presenting an Oscar? Perhaps because she’s a Bollywood star.

But why are these miskites on this channel (the supposed “fashion fashion expert women) telling us about how others look? Get those goons a mirror!

I just noticed that Olivia Wilde‘s dress is made of mesh over her naked chest. But it makes her neck look like it’s wrinkled, which I’m sure it is not. And I’m shocked that her beautiful face has such eye wrinkles! How is that even possible?

I just learned that she’s the producer of a documentary about Ebola! Wow. I’m very impressed.

Why does JK Simmons make me so nauseous? I don’t know if it’s his icky looks or the fact that he seems so full of himself.

Naomi Watts is the best dressed, by far! [Note: That opinion never changed all night, by the way.]

Shockingly, no one on this show annoyed me too much this time. But then again, I skipped through everything but the actual interviews, so that left only Ryan Seacrest for me to critique.

But this two and a half hour show did way too few interviews, and way too much phony fashion baloney! (And those idiots erroneously identified someone with red hair and a clown suit as Tilda Swinton!!! HaHa! And went on and on about it! What fools.)

Lou Gossett said to Ryan, about the new Roots, “Of course I’ll watch. I want to see if they’re as good as we were!” I appreciate such a good, honest answer. 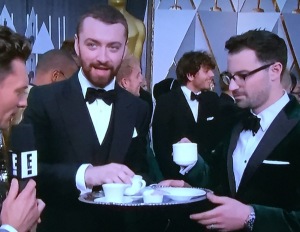 Good-natured Sam Smith and Jimmy Napes having a cuppa tea foisted upon them by Ryan Seacrest. On the red carpet!!! Photo by Karen Salkin.

Sam Smith and Jimmy Napes went along with the stupid bit of serving them tea on the red carpet, because they’re British. Sam even asked, “Can we take these?,” about the cups. How adorable of them. And how idiotic of E!

Alicia Vikander did not walk the press line with her boyfriend, fellow nominee Michael Fassbender, who didn’t do nay interviews, on all four of these shows! (But I noticed them warmly greeting each other at the top of the stairs later on, and he immediately took a selfie of them. Cute.)

I can’t stand Whoopi Goldberg. She’s so gross. As awful as she looks, she looks even weirder without glasses.

Eddie Redmayne is perhaps the most likable famous person ever.

Olivia Munn does look a bit strange these days. People have been saying she had facial surgery recently, but she says she looks different because she eats Japanese yams. I think it may be because she’s extra-skinny.

Ryan could not get rid of Jennifer Jason Leigh fast enough. Was it because she’s a tad weird? Or just not young and good-looking?

Heidi Klum looked like an idiot! I think she’s always trying to look young for her young boyfriend. But she went too far this time because her dress looks like she’s five!

I rooted for Mark Rylance to win Best Supporting Actor since I first saw his film, Bridge of Spies, but why would he wear a fifties hat on the red carpet? Good thing he took it off in the audience. But where did he put it? And was it a fashion choice, a classy English thing, or just an affectation? (He doesn’t seem the affected type, at all, though, so it must be the one of the other two.) 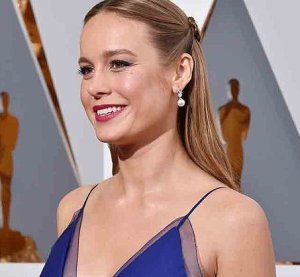 Brie Larson. Why would she want to feature her sideburns like that?!

Brie Larson‘s whole presentation is iffy. Her hair is bad, and features her sideburns. The whole ensemble is not a great choice for someone who’s expecting to win an Oscar!

I wonder why E didn’t let Giuliana Rancic do any interviews this time. And, sadly, her dress was the best one she’s ever worn, even though her face looked very strange.

It looked like Ryan snubbed Sly Stallone! I don’t know if that was on purpose, but while the woman who helps him call people over was clearly asking him to interview Sly, he chose instead to call Jason Segal over. I’m still scratching my head over that choice.

Ryan grabbed Jill Biden‘s hand, which was so wrong to begin with, and then gave her the shortest shrift ever! So rude.

I had never seen Ashley Graham before, but now I have to agree with Cheryl Tiegs on this one…she should not be a cover girl, (except maybe for Plus magazine.) 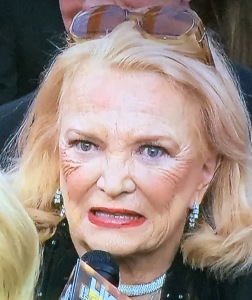 The two jerks did surprisingly good interviews this time, so props to them for finally nailing it. But they didn’t get the really famous people!

Diane Warren needs teeth whitener. Stat! She’s been in the public eye long enough to know better. But at least she’s honest about that she’s the frontrunner. [Note: She wound-up not winning Best Song, which was fine because I didn’t like it, but I did want to hear her speech that she kept alluding to on the carpet.]

Gena Rowlands should fire her make-up person for making her look like she has Seal-esque scars on her cheeks! (The person should know better than to apply blush like that to eighty-five-year-old skin!) 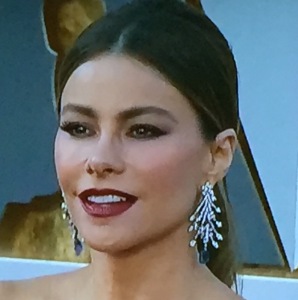 It looked like Sofia Vergara had some work done on her face. Strange choice. And why was she at the Oscars?! Maybe she thought it was the Emmys.

Good for Best Adapted Screenplay winner Adam McKay to point out that Gena Rowlands did not reference his film, as the idiot interviewers told him she did. (He was correct—she did not even come close to doing that! Why did they lie like that? What was the point?)

That was the best Whoopi Goldberg ever spoke. She was honest, lucid, and not her usual phony self.

I now love Mad Max director George Miller. I just realized something–have you ever seen him and Mr. Magoo together?

Hate to say it, but the interview with George Miller and Tom Hooper was one of the best ever. Not because of the hosts, but rather because the two directors talked to them, (about their own experiences together, like people do to spouses at high school reunions,) rather than answered questions.

Patricia Arquette is another one with major eye wrinkles. But judging by her messed-up teeth, I don’t think she really cares.

How ever did JK Simmons get such an attractive wife? Classic case of Beauty and the Beast, (a version of which I’ll be reviewing for you tomorrow, coincidentally!)

These chicks with the chest mesh have to be really careful that it matches their skin totally. Or else it could look really weird, like it always does on ice skaters.

As funny-looking as she is, I do admire how much Chrissy Teigen and John Legend love each other. 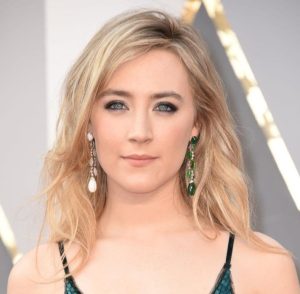 You see that Saoirse Ronan’s earrings are the same design, but two different colors? I wonder if even SHE noticed! (And no–the white one is not backwards.)

Common is sure willing to chat! And props to the hosts for not rushing him off. (That’s probably because they couldn’t get many others to stop for them, especially big names.)

I’m not very familiar with Olivia Munn, but I had never noticed that she has buck teeth! Weird. (Have you ever seen her and Bucky Beaver together? Or, for you real oldies, Mimi Hines?!)

I had not realized all night that Saoirse Ronan was wearing two different color earrings. And you know what? No one even mentioned it all night! How unobservant (or uninterested) could they be?! They were the same design, just one was green and the other one white. I used to to do that all the time. But I would have preferred hers to be both green. (Who am I now?!) 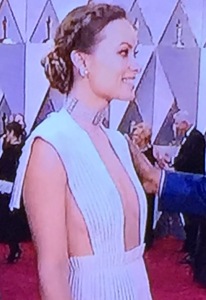 Robin Roberts‘ dress and jewelry looked great. Her hair and make-up—not so much.

My first thought when I saw Olivia Wilde’s naked chest was “nice rack.” (I just wanted to beat Mr. x to saying it!)

Charlotte Rampling was smart to wear flats. (I don’t think she had a choice, though; I saw her at a screening a few months ago, and she could hardly walk.) But that dress does doing nothing for her. 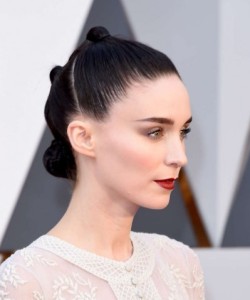 And why does Rooney Mara always want to look so weird, when she’s just about the only one there who has the potential to look like old Hollywood glamour?! She needs a new stylist, stat!!!

She could be so beautiful, but instead she chooses to consistently look weird and awful.

Jacob Tremblay is so adorable and mature. He actually listened to every question he was asked all night, and gave very thoughtful answers. And I absolutely adored his hand-in-pockets stance.

Kerry Washington said she was there, and working, “So that we never have a year like this again, so that we can be as inclusive as possible.” So can she (and all the others) please tell me just which actors and actresses she would exclude from the nominations this year, to give it instead to an undeserving person, just because of their skin color? 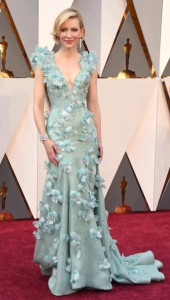 I also am a fan or Julianne Moore‘s dress, perhaps the most, but her hair looks bad.

How does Michael Strahan have so many jobs with that dreadful lisp??? someone please explain that to me!

I hated Cate Blanchett‘s dress! Ugh. As I tweeted, how many fine feathered friends were sacrificed to make that dress?

Sly Stallone is so honest, and he was correct to be so shocked that this was all happening for him at this stage of his career, amongst so many acting stalwarts. But is he missing teeth?

Naomi Watts was the winner of the night!

Lady Gaga is really so bad-looking. But she’s always working it.

Naomi Watts’ dress is my hands-down favorite! And she’s well-spoken.

But, I hate to say it, I think his mouth is getting a bit more crooked. And I’d be happy to help lubricate his always-chapped lips. Just sayin’.

Kevin Hart always livens things up. Good to have him there.

And that’s finally it for my Oscars 2016 coverage! Except for all the Gifting Suites, of course! Those write-ups begin in just a couple of days, so please don’t miss all that juicy-ness!