I’m so sick of idiots slamming this sport!!!

I doubt that even Michael Phelps could do it, and he’s practically a fish! I hardly know anyone who can even swim really well, and I live in Southern California, land of the backyard pool. 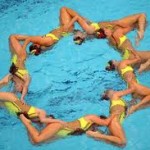 So, before you succumb to the thoughts that lesser beings foist on the public, please read the points that I make, and realize that anyone who makes fun of this sport is an uninformed moron. You may not want to watch it, which is your prerogative, but please realize just what wonderful athletes these young ladies are. [Note: by “lesser beings,” I mean lesser than the female athletes of this sport, not lesser than I.]

Some of these points I made in my Olympics wrap-up column earlier in the week, (you can read it here, if you missed it: www.itsnotaboutme.tv/news/2012/08/14/sportskarens-musings-2012-summer-olympics-wrap-up), but many I saved for this column because I didn’t want them to get lost in the shuffle. These athletes deserve the respect that I’m giving them, and I hope you will, too, from now on.

Here are my previously-unpublished thoughts on the subject:

At the Olympics, (or anywhere, for that matter,) basketball players can go to eat, see other games, go shopping, and have normal lives, while the synchro girls are in the pool ten hours a day! Those guys just have to hone their natural abilities in a normal sport with easy-to get-equipment and space. These girls need a pool, a gym, and a ballet studio. Not to mention the many mats on which to practice the throws on land.

All able-bodied people can run, shoot a basketball, and jump around; most can even swim a little. But none of us who aren’t trained can do synchro!!! At all! Try it the next time you’re in a pool. Or even in a tub!

Look at the sports we as a people admire most: golf, basketball, tennis, baseball. Even I‘ve played all of them, with differing degrees of success, so doing them is not too hard. But synchro??? I wouldn’t even attempt it. For even one second. 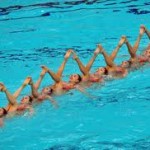 We can all also bowl, and even shoot an arrow and gun. But, again, I’d like to see everyone try to hold their breath, underwater no less, with eyes open the whole time, (and often smiling mouths open, as well,) while moving through a pool without touching the bottom for about five minutes, and push other people out, in an artistic way, and have gorgeous, graceful legs doing routines above the water. And in time with one to seven other athletes! If you can do this, and are not a synchronized swimmer, please let me know in the comments below so that I can give your props in public. But I’m not holding my breath for anyone to raise her hand. (And certainly not holding it for anything close to five minutes!!!)

I can’t imagine the toll this must take on one’s body and looks; their skin must get prune-y on a daily basis! And it can’t be good for hair to be in chlorine so many hours a day. They put that gelatin in their hair for competitions, but do they use it every day? It’s supposed to protect their hair from the water, but then how do they wash it out??? It’s a catch-22. I was ruining my hair washing it every day, and stylists had to scare me into doing that less, which saved my luscious locks. But these girls have no choice! And that much water, and chemicals, just has to be tough on eyes and nails, as well. And what about if they train outside, in the sun? Definitely a no-no; there’s not a strong enough sunblock for that many hours in the elements.

And now, my thoughts from the column the other day, so you don’t have to sift through it to read about synchro only: (Am I not thoughtful???): [Note: I never repeat my material, even on almost four hundred episodes of my show, Karen’s Restaurant Revue, but these points about the sport may have gotten lost amidst the rest of my Olympics musings, so I’ve included them again.]: 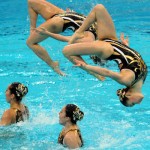 Seriously, synchro is the most mind boggling sport ever!!! I don’t know how they do it. And what did they do with that talent that took up most of their time, before Cirque du Soleil was invented??? (Same with rhythmic gymnastics.)

I would rather throw the discus, weightlift, or run the marathon than synchronize swim!!! Forget even having to breath under water for so long–I don’t want to get chlorine in my hair ever day!!! And what must their nails go through???

Regarding the super-taut feet position on the synchronized swimmers: mine look like that only when they’re cramping!

Forget Usain Bolt, (though I love him personally, as you might have read in this e-zine,) and the decathletes; the world’s greatest athletes are the synchronized swimmers!!! By far. I think even Mr. X agrees with me on this one. What they do is tantamount to magic. Think of what their sport entails: not only being in the water all day, which ruins skin, hair, and nails, but holding their breath while they maneuver above and below, smiling the whole time, with their eyes open underwater. How do they do it???