Trending
You are at:Home»SPORTS THOUGHTS»SPORTS/KAREN'S RANTS: FINAL THOUGHTS ON THE 2012 OLYMPICS
By Karen Salkin on August 20, 2012 · SPORTS THOUGHTS

FINAL THOUGHTS ON THE 2012 OLYMPICS

Ever since I finished the Olympics Wrap-up column last week, other thoughts on the subject keep coming to me. So, here are my final musings on the subject. Thankfully, for me who has to type them and you who are reading them, there aren’t that many this time. Whew!

Most importantly, I hate that people are making gymnast McKayla Maroney famous in a fun way for making that sour face on the medal stand, even though said expression is really about her being a bad sport! She displayed awful sportsmanship on the podium during the medal ceremony because she was pissed that she won only the silver, when she was declared a shoe-in for the gold. It’s not the gold medal winner’s fault that McKayla fell on her dismount; it’s McKayla’s! To stand up there, wearing a silver medal, where so many others would love to be, acting like the spoiled brat that she obviously is, for all to see, she should be reviled, not made a national sensation. And the people who are getting on board with all the fun jokes about the incident are disgusting themselves. If she had won, and a Russian chick stood there like that, Americans would sure have something negative to say about her worse-than-childish behavior, as well they should.

Now on to quicker thoughts: 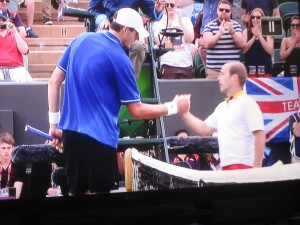 I really love that athletes come in all shapes and sizes, even in the same sport. Just look at the height difference in the tennis match between American John Isner and Belgian Olivier Rochus.

OMG–we forgot to discuss the opening and closing ceremonies!!! First the opening*: It was so stupid. And where was the athlete’s pledge? Or did NBC*** deprive us of that, too?

And chopping up the closing** was brutal! Who could have known that you had to record an extra two hours to get to see those few minutes of The Who??? [Note: I recorded it, by accident, but some still cut off.]

I love the female gymnast’s sparkly make-up. It’s totally stupid, and actually doesn’t make them look especially pretty, but I can never help but imagining what fun it must be for them. You go, girls. 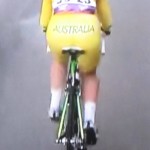 Does this girl, (in the photo on the left,) look like an athlete from the back? She looks worse than I do nowadays, and that’s saying something!

And why did so many commentators, who are supposed to be the experts keep pluralizing “ceremony” and “final”??? It’s one ceremony and one final that the spoke of; it’s about time someone, other than moi, corrected them!!! And that they listened!!! [Note: in case you missed it, you can read more of my thoughts on the subject here: www.itsnotaboutme.tv/news/2012/08/14/sportskarens-musings-2012-summer-olympics-wrap-up] 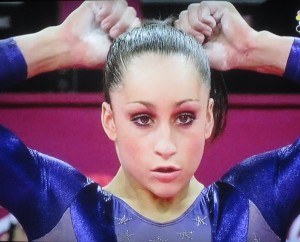 Look how big her hands are compared to her head! Lucky girl--the better to grip the apparatuses with.

I had never before noticed how giant all the female athlete’s hands are!!! Oh my goodness! Gymnast Jordyn Wieber’s look like those of Mickey Mouse! Or at least Minnie.

Speaking of Jordyn Wieber, I feel awful for her. Everyone was so sad for her when she got screwed out of a spot in the All-Around competition. But they shoved her under the bus to fawn all over creepy Gabby Douglas when it was over.

*I was too lazy before to write details of the opening ceremony, so here they are now. It was just lame, especially compared with the show put on by the Chinese people in Beijing four years ago. The announcers said that director Danny Boyle wasn’t going for a spectacle to rival those. Duh. We could have figured that out in the first minute. Rather, he wanted to do a fun show that reflected Great Britain. I’m sorry, but a bunch of sick children in beds, and a giant baby, are not what comes to my mind when I think of England. Ever. It would have been better if they had just put on one giant tea party and called it a day!

And that waste-of-time long segment about a young couple getting together and going to a club almost made me tune out. What did that have to do with the Olympics??? Or London? It was just dreadful. And actually put me to sleep for awhile. 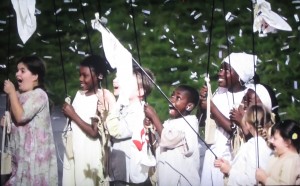 Part of the "sick children" segment.

And what was up with the Olympic flame? First of all, we viewers always can’t wait to see what truly famous person will light it. (Think Muhammad Ali in Atlanta in 1996.) Or at least what clever method they’ll use. (Like the para-Olympian archer in Albertville, France in 1992, who shot it with a lit arrow. That was spectacular.) These English fools had a few athletes-of-the-future light it! What a supreme disappointment! Mr. X was sure that some surprise was coming next, but no.

And the way they situated the flame itself was stupid, too. No one could see it for the entire sixteen days and nights unless they were in the stadium! It’s supposed to rise above the city, for all to see and revel in. Boy, did they miss the boat on this one.

**Now to the deets of my thoughts on the closing ceremony. It was beyond disappointing. I thought it was a great idea to feature a bunch of their music stars, because only they, or a city in America, could really do that. That part was typically British and was great. But they did even that in a stupid manner.

Aspects of the closing, as well as of the opening one, had elements that were way too small for the assemblage in the stadium to enjoy. Even though we TV viewers got to see the happenings up-close on our screens, all I could think of is how unfair it was, not to mention disrespectful, to that paying audience.

***And NBC’s coverage, with all their many networks, gave us exactly one non-competition scoop! (It was when those badminton bad sports were expelled from the games.) There was so much else going on, and I, who watched every minute of every channel, was in the dark! Mr. X had to tell me what was going on there from new he read or saw on other TV stations. Shame on them.

And, I understand that they deprived us of much of the closing ceremony, as well, including some musical acts I would have liked to see. And having us wait an hour to see the rest of the festivities, which they dumbly dubbed “The After-Party,” (like we were all idiots who actually thought it was different from the rest of the show they should have showed us continuously to begin with) was just rotten of them.

Also, usually, one of the most fun aspects of the closing ceremony is interviews with the various athletes as they let loose and celebrate with their compadres. Where was that this time? I guess I’ll have to wait yet another four years to see that again.

Last random thought—I can’t wait to see the pageantry that I expect from Rio four years from now! That should be a wild dance party, and will, hopefully, make us forget the dullness of the London ceremonies. Fingers crossed.