I never could stand Hope Solo. Being not a fan of soccer, but of most other things sports, I had ESPN on with the sound down one day a couple of years ago, and saw what looked like a serious story on this woman. It appeared to be an in-depth profile, that I didn’t have time to watch, but since I never heard of her, I did research to find out why the long story.

Within minutes I discovered that she had caused trouble on the women’s national soccer team, calling out both her coach and her fellow goalkeeper, both big no-nos in sports! (And in life, sometimes, too.) 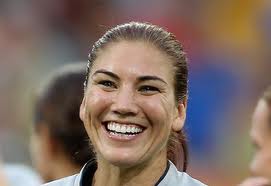 I’m the first one to not want everyone in the public eye to say the politically correct thing, so at first I thought, “You go, girl!” I like people who say how they really feel. But, in this case, I have to agree with the masses and say it was totally inappropriate. And unsportsmanlike.

I never gave her another thought until she showed up on Dancing With The Stars a few seasons ago. I was thrilled for Maks that he finally had an athlete to train! He’s my co-favorite dancer on that show, ever, (along with Derek Hough, but in totally different ways,) and I want him to win one almost as badly as he does!

But, the second I saw lummox Hope try to motor around the floor, like I don’t know what, my joy for him changed to utter sorrow. I don’t know how he worked with her week after week, and he was always adorable to her on the show, if not in the rehearsal footage. (In training sessions, all the couples have drama, most of which I feel is manufactured.) He even stood up to head judge Len Goodman, with whom he has to work every year, on Hope’s behalf. He had to know she sucked, but always stuck up for her anyway.

I even wrote a column begging you guys to vote for them, but only because I couldn’t bear the thought of that other lummox, Rob Kardashian, being in the final.

But it was hard to watch her even speak, let alone dance. (And I use the latter term very loosely!) She appears to be so insecure, especially in the weird way she talks. Her eyes reveal that fact, as well. And, seriously, it was hard to look at her bad skin. (And I didn’t even have hi-def then!) I know she has enough money for a dermatologist, so invest in one, honey! Fast.

So, jump ahead to recently, when she’s playing in the Olympics, and, rather than just supporting her teammates and concentrating on the games, she takes to Twitter to chastise commentator, and former national team heroine, Brandi Chastain, over Brandi’s professional comments about this current team’s defense. I seriously can’t imagine what could have been in Hope’s mind to do that at that time. Sports commentators always discuss the ups and downs of the teams they’re covering; if every player took to task every single on-air comment made about him or her, no one would have time to play the game!

So, in the Olympics, Hope’s American team wins the gold medal and we have to see her on every sports show, uncomfortable speech and bad looks and all. She’s especially thrilled to be in the public eye now because she’s promoting her memoir that just came out.

First of all, I can’t imagine who would even be interested in reading about her life. I guess it would be soccer fans, but mothers of young players certainly wouldn’t want their daughters to emulate a rotten sport such as she. And I don’t think anyone else would be interested.

So, the first thing I read about the book is that Hope claimed her former coach, Greg Ryan, shoved her in a hotel room in 2007, after he had benched her for an important game, which everyone seemed to think was the best move for the team at that time. (But they did wind up losing anyway.) She claims they were discussing the game when it happened. Mr. Ryan vehemently denies the allegation. We all know he benched her for that important semi-final game due to her rude behavior then, which perhaps was cutting off his nose to spite his face, but how many parents have had to teach their kids a lesson by depriving them of something that the parents really want them to get to do? It appears Hope’s parents didn’t do that enough!!!

So, those of us who read about sports regularly are already feeling bad that she’s casting aspersions on this poor guy. Knowing absolutely nothing about him, I still tend to believe him over her. If he had pushed her at all, why wouldn’t someone as outspoken as she not reported him right then and there? He would have been fired instantly! And she’s such a strong, giant woman—why didn’t she just push him back? But she waits to write the incident in a book four years later? Methinks something’s fishy in Denmark.

But then, within a week or so, I start reading that she said that her dance partner, Maksim Chmerkovskiy, slapped her during one of their rehearsals for DWTS. As I always tell my friends, if we weren’t there, we really don’t know the truth of the situation. (Like when people declare Tom Cruise to be gay; unless you’re a male who slept with him, you don’t know for sure. But we can pretty well guess at what’s going on there.) And the same is true for this situation with Maks; none of us were there, but we can pretty much figure out that Maks is the one telling the truth here.

Hope’s either a liar or an idiot. Or both. If Maks really did slap her, or whatever the hell she says he did at the time, why would she not report it to anyone? And keep working with him? Plus, she’s probably stronger than he is! Why didn’t she just haul off and smack him one? Also, don’t they have cameramen in all those rehearsals? Or did Maks just supposedly wait until one left the room to do this?

I can tell you right now, if someone had harmed me in any way, I would have punched him, even with my lack of strength, and not only reported him to the producers of the show, but to the police! I certainly wouldn’t have continued working with him, stayed friends with him, and gone out to dinner together months and years after my stint on the show ended! Several times, as a matter of fact.

We all know she’s never going to retract her statements. Just as she was delusional in thinking that she could dance, she seems to be the same on this topic. I have no idea what ABC and Maks are going to do about it, but I wish they would try to muzzle her. But even if they don’t, and just hope the controversy goes away, we can figure it won’t be the last we hear from her; she’s always gotten into trouble because of her big mouth, and with a creep like that, I don’t see her going away any time soon. Shame. It looks like she’s won two gold medals this year; one for the soccer team win at the Olympics, and one for being a champion prevaricator. Good job on both.