This was surprisingly, (especially because of the dearth of real international-caliber stars,) the most exciting figure skating National Championships in a very long time. 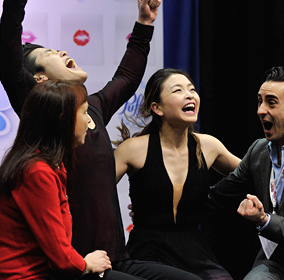 brother-and sister team of Maia and Alex Shibutani, flanked by their ecstatic coaches.

I hadn’t even planned on writing about them this year! Part of that is because I rarely watch skating live (or even when the-powers-that-be deign to broadcast the competitions, after they’ve already been held) anymore; until recently, I was almost a year behind! No lie. And because few outlets report on the sport these days, I had never even heard who won…last March!!! (When I was looking for pictures of this recent competition to share here, I couldn’t even find stories about it! I even went to the Huffington Post Sports Page, and it was nowhere to be found. But there were articles about people diving into snow like it was water! Shameful.)

Also, I got caught up in the football play-offs yesterday, so I didn’t think I’d finish watching the skating on time to report on it. But, mostly, I had planned on a different topic column today because not many people seem to care about skating nowadays. Truth be told, even I’m a little bored with it. (Bite my tongue!)

But I awoke at the crack of dawn thinking about all that had happened for the skaters this past week, (despite the fact that I had watched the also-exciting football games and three awards-contenders films yesterday,) and I just knew that I had to weigh-in on the wonderful achievements of these beautiful athletes.

Every single discipline had surprise performances, several of which left me in tears, which was a regular occurrence for me in the days of Michelle Kwan and Todd Eldridge, but had not happened to me in recent times. Many of them were glorious to behold.

Let’s discuss the Ladies first. The only girl I’m a fan of is Mirai Nagasu, who always gets screwed, but she keeps on keepin’ on. She did great, and came in fourth, (although I feel she really should have been third.) The contest is usually between recent former champs, Ashley Wagner and Gracie Gold. I dislike both girls intensely. They’re just not likable, on any level. They both never seem like nice people, they appear to care about only themselves, and neither one has ever displayed good sportsmanship, that I have witnessed, anyway. Poor funny-looking Ashley fancies herself to be sexy, and Gracie thinks she’s one of the top skaters in the world, while neither has had much success on the intentional stage. 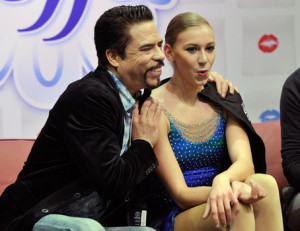 And the young ‘un, who’s been near the top for the past two seasons, Polina Edmunds, has no personality to recommend her, either. She just looks totally blank all the time.

So, in the Short Programs, Ashley fell and Gracie “popped” a jump. (That basically means she did a single twist, instead of a triple.) And Polina skated a beautiful, graceful program, choreographed by one of my all-time favorite American champions, Rudy Galindo, and as a result, she was in first place going into the Longs.

So, Polina was eight points ahead of everyone, which is almost impossible for the others to overcome, and Gracie and Ashley were almost tied for the next spot, along with a third girl who would wind-up not factoring in. I had no one to root for, because I knew Mirai would get screwed, as she always does. But it’s a judged sport, so what can you do.

They skate in random order for the finals. So, Ashley went first, and did a great job, save for one fall. Her coach was such a d-bag to her after that I was embarrassed for both of them. She needs to change coaches for next season. She still got good marks, and held the lead for a little while.

Then Polina went, with a Gone With The Wind-themed program, and it was again graceful and flawless. There was almost no way she could lose. Gracie, who never skates clean programs, (meaning, she always falls, or pops a jump, or suffers some other disastrous occurrence,) would have to earn five points over the score she received two years ago, when she won it all! It was close to impossible. 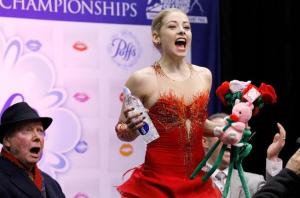 Gracie Gold, learning she had won.

As she took the ice, even whiter in the face than she usually is with her awful kabuki make-up that no one corrects her on, Mr. X observed that she just wanted to leave the building, and go straight into retirement from the sport. We both thought there was no chance in hell she’d do even a good performance.

She was skating to Firebird, which is wonderful music, with great choreographic potential. But she started off a bit shakily. And then, she hit her first difficult jumps. And that was it. She, (excuse the pun,) was on fire! It was wonderful! Not a mistake anywhere, and she skated the heck out of it. Even her bows, with her fingers fluttering like a bird’s wings, were great.

But she needed marks that were off the chart. And guess what? She received them!!! She won! Even stranger than that is that Mr. X and I were happy about it. We believe in fairness, and Gracie totally deserved that title. So, good for her.

The Mens’ competition was quite the opposite for me, with me rooting for just about every one of them. And it was more exciting and crazy than the Ladies. What a wild ride. 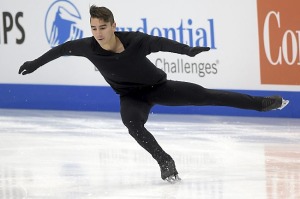 The defending Champion, Jason Brown, was out with an injury, which meant a chance for all the others. Max Aaron, the 2013 Champ, was the one to beat. He’s a little firecracker, who was also a recent hockey player (and could have gone pro in that discipline!)

Several of the lower-ranked guys went first, and two in particular, Grant Hochstein and Alexander Johnson, had wonderful programs, and finished their best ever. (Grant wound-up in fourth, and Alexander in sixth.) I’m so happy for them.

And then it was time for the final quartet. The teen-age Nathan Chen went first, and performed four perfect quads! For you nescients, that’s a major feat. One quad is hard enough, so nobody does four! His artistic skills are somewhat lacking, though, and both scores count. But his technical marks were off the charts. So, even though he was fourth after the short, it looked like he just might win.

Then Max went, and did great. He had two quads, and even though the artistic side is not his strong suit, with his Black Swan program, he did beat Nathan, so he was in first, with just two men to go. I was pretty much rooting for him. 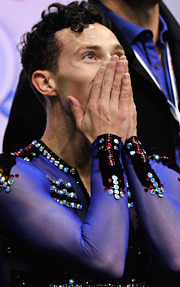 Adam Rippon, realizing he was finally the Champ.

The next to go was the most graceful, artistic skater in a long while, Adam Rippon, who should have won last year, but the judges screwed him, big time, in the short. So, this time, he fell right off the bat, on his only attempted quad, and I thought that was all she wrote. But he kept his wits about him, and skated beautifully from then on, including all the rest of his jumps.

Even the commentators thought he still didn’t have a chance at the title, but guess what? He did! He won the whole thing! And the other guys seemed genuinely happy for him, which was lovely to see. Quite the opposite of the girls, let me tell you.

The poor last guy to go, Ross Miner, (who had been a close second after the short,) just missed the podium, coming in fifth. I’m so sad about that because it was his birthday that day. And the World Championships are in his hometown of Boston this year, and he was desperate to compete there. So, he and I are both trying to get over that disappointment. (I hope he’ll do better at that task than empathetic I will.)

Last word on the Men: I don’t know if the judging panel would have taken such a big chance on awarding Adam Rippon the title if it were an Olympics year, rather than just a World Championship one, but I’m glad they did. 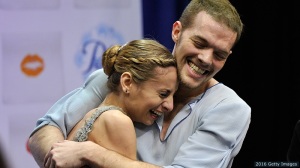 But the most emotional wins for me were in the Pairs and Ice Dance. In both cases, the duo expected to come in second had absolutely brilliant performances, and rose to the top. We all though the judges would keep the teams status quo, so I’m thrilled they rewarded the correct couples.

So, major congrats to Pairs winners Tarah Kayne and Danny O’Shea and the Dance brother-and sister team of Maia and Alex Shibutani. They both made me really cry, which isn’t a good thing in sport—it’s a great thing!!!

I wish them all the best of luck at the World Championships in March. You go, skating boys and girls!!!