As someone who has not only been a lifelong sports fan, but has covered them for decades now, (first on my TV show, then doing sports radio, and now writing about them here on INAM as often as possible,) I was absolutely thrilled to be invited to the LA Sports Innovation Conference!

But this was on such a higher plane than just being a spectator. So much goes into the field of sports, on so many levels; the average fan can not even begin to imagine it all. So the conference was very enlightening. It featured seven panels, a “Start-up Showdown,” a keynote speaker, a post-event cocktail party, and, of course, my other area of expertise—lunch! Whew. 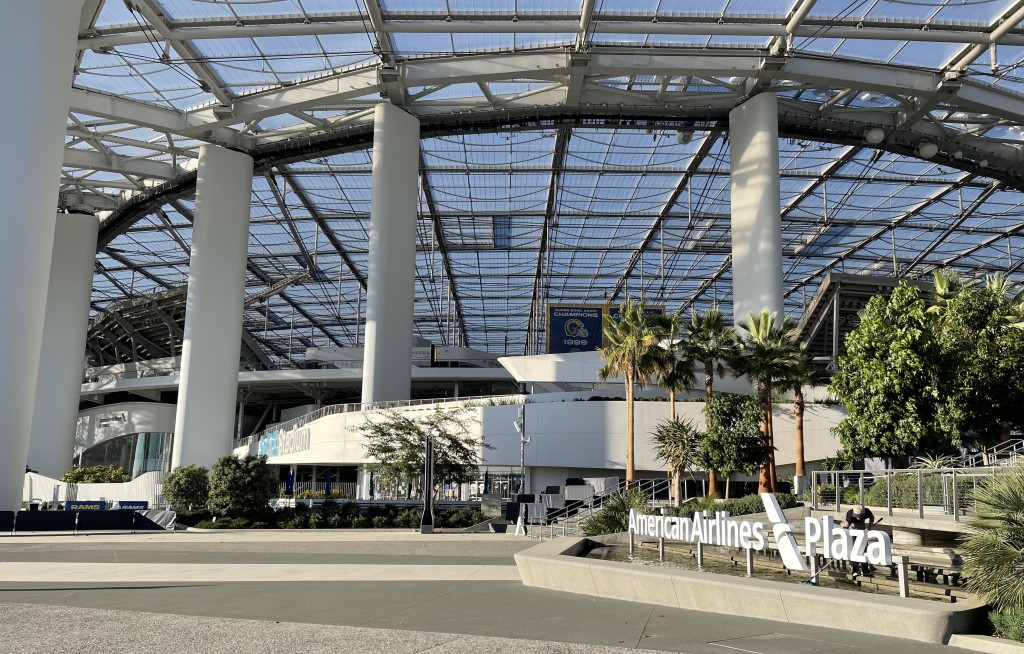 Part of the plaza connecting all of the sports complex. Photo by Karen Salkin.

Even though it was basically all in the category of work for me, I actually had a great time! The entire event was much cooler and looser than I had expected.

The panelists spoke on emerging trends, such as NILs, (more on that in a minute,) athletes getting into business, and all kinds of cutting-edge innovations in the sports industry.

Despite my 147 IQ, (which I believe I’ve mentioned before, a time or two–or twenty!,) my shallow mind finds it hard to grasp serious topics, which concerned me a bit beforehand. But I needn’t have worried; all the speakers should be teachers because they broke down their topics to make them easy to understand.

The LA Sports Innovation Conference was held at the YouTube Theatre, which, shockingly, I had never even heard of before I received this invitation! It’s right across from Sofi Stadium in the stunning Hollywood Park complex. It was even the first time I had been to SoFi. (Really–how much can one little bon vivette, who has multiple events all the time, do???) 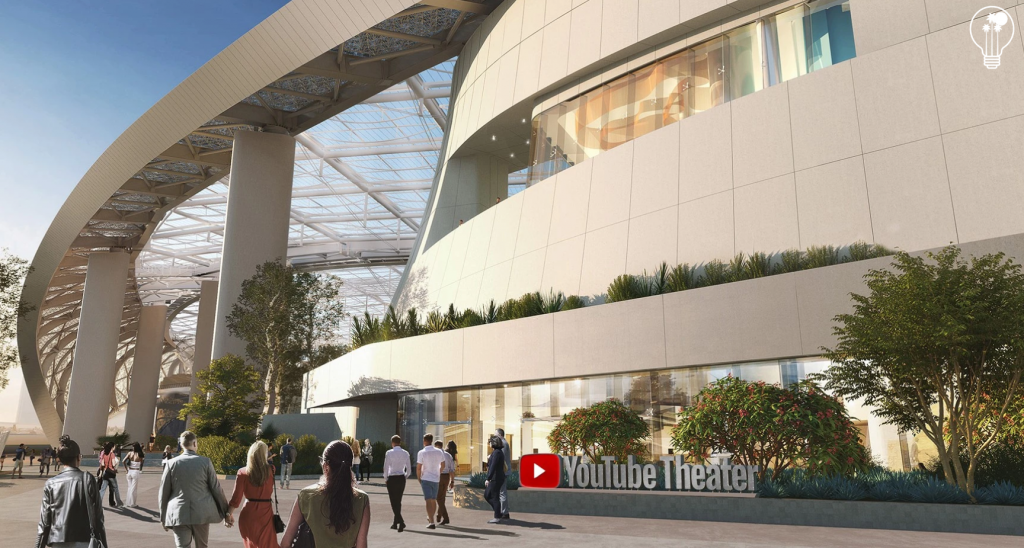 And I’m happy to report that I loved every second of the experience. Now I’m spoiled because, since no one was playing a game that day, nor performing a concert, it was easy enough to get there. And my associate, Marc, and I even got to park a few steps from our destination! How lucky were we? When will that ever happen again?! (Well, hopefully again next year, at the 2023 LA Sports Innovation Conference!)

I understand that when the panels were over, guests had the option of taking a tour of the stadium. Marc and I were desperate to take advantage of that kind offer, but alas–as usual, I was overbooked that day, so we missed-out. But the little that we did see of the area was fabulous! We actually entered the premises at the absolutely wrong place, so we wound-up having to walk across the entire plaza. But, that worked out well for us because, besides that I was grateful for the exercise, it gave us beautiful views of the entire panorama.

Another perk of the conference was the wonderful access it afforded us to the entire YouTube Theatre itself.  We were seated at tables right in front of the stage, up-close to all the action. And I got to conduct interviews backstage, right by the dressing rooms. (Marc was more than happy to sit those out because he got to avail himself of the generous snacks in the close-by VIP area.) We even got to experience a suite at the top of the auditorium for a short while! 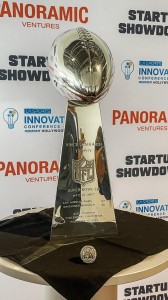 The Lombardi Trophy. Photo courtesy of the LA Sports Council.

Most of all, I enjoyed getting a close-up gander at the iconic Lombardi Trophy, won by the LA Rams at the last Super Bowl. (That team should also admire it now, while they can, because it will be a miracle if they win it again this season. Just sayin’.)

All the people we encountered that day were lovely. I thought I’d feel a bit out of the loop with so many business peeps, (as opposed to athletes,) but I could not have felt more welcome.

So now to my favorite part of the happening. And no—it was not lunch!!! (Although you would usually be correct to think that.) It was speaking with two famous LA athletes, one I already knew a tiny bit, one I just met. And both could not have been more darling. Even though they knew I would be reporting what they had to say, we just basically chatted; there was no official interviewee posturing from either of them, which I so admired.

First up was former pro basketball Champion, Ron Artest, (aka Metta World Peace, for you more modern folks,) of whom I have always been a fan, even in his somewhat dark days. I had met him a little over three years ago, at the premiere of his documentary, Quiet Storm: The Ron Artest Story. We have a mutual very dear friend who introduced us back then, and he said that he remembered me. (Or, at least, was nice enough to pretend to.) He even laughed when I showed him the picture of “us” that I had published in that article back then. (Here’s that link, if you’d like to see it, and learn more about his life: itsnotaboutme.tv/news/movieparty-quiet-storm-the-ron-artest-story-premiere.) 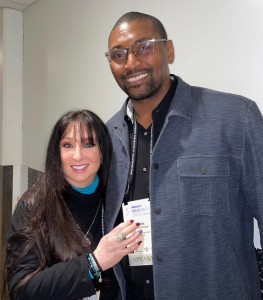 Backstage at this conference, we talked about our friend, Ron’s fam, (most of whom I had met last time,) and all of his endeavors since he retired from the game. He even had the patience to look over my article about that movie premiere because I needed him to identify an old friend of his about whom I had written, a guy nobody could name for me back then. So I’m relieved to finally have the correct info straight from the horse’s mouth!

But Ron and I spent the most time talking about—again, you’d be wrong if you assumed it was me, but I like your thinking—his son! He has a big family, and he’s proud of them all, but he was positively glowing when he told me about everything that Jeron’s been doing! (And I must add, that despite now being a grandfather, Ron doesn’t look much older than his kids!)

By the way, I appreciated that when I asked which name he preferred to be called—Ron or Metta–he said he’s fine with either. Most people insist on the new one when they change it, no matter how long you’ve known them by the first one. So I really appreciated being given the choice, especially because he’ll always be “Ron” to me. (On a sidebar, three days later, Marc proudly told me that he had just bumped into “Metta” on a hike! Which means they’ve probably seen each other there many times before, but didn’t know it until I introduced them at the conference. I love situations like that.) 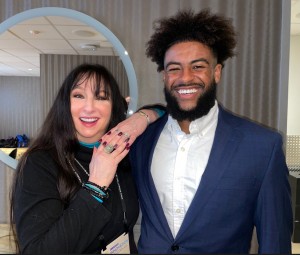 The other athlete I spoke with is UCLA quarterback Chase Griffin, which is perhaps the best name ever! We talked for a long time, and I absolutely adore him now. He had just been on the first panel after lunch, which was the uber-informative NIL & Athlete Brands: A New Era Is Here. I, who is completely nescient about finances, had actually heard very little about NILs, (meaning a college athlete can now lay claim to their “Name, Image, and Likeness,”) so it was all a revelation to me. During the panel discussion, Chase summed-up the topic succinctly by declaring, “NIL doesn’t help my brand; it is my brand!”

Coincidentally, I had just learned a bit about that subject on, of all places, Coroner, a drama series from Canada. (No worries if you’ve never heard of it; it’s on the CW.) So I found that panel at the conference extra-interesting.

Chase is a wonderful guy who not only already graduated from UCLA in two years, and is now working on his Masters there, but…he laughed at everything I said! You know I adore someone with a fabulous sense of humor.

I also got a kick out of the fact that we have UCLA, and some athlete pals, in common, along with the eateries in Westwood, of course! And Chase laughed heartily at this story I told him: Back in the late ’90s-early aughts, I had very many UCLA friends, most of whom were athletes there. Then they started graduating, but I had one left, Aaron, who called me one day and said, “I have bad news for you—I’m graduating.” He was kidding around of course, but I still felt bad, and said, “Oh no—now I won’t have any friends at UCLA! What am I gonna do?!” To which Aaron replied, “You should set up a booth at their next job fair!” But I guess I don’t need to now because Chase just won the coveted title of My New Best Friend!

On the more serious topic of college athletes finally earning money for all their hard work, Chase reminded me that Ed O’Bannon, the star of the 1995 UCLA Championship basketball team, is actually the one who got the ball rolling on NILs! I was friends with Ed’s little bro, Charles, and the rest of the team starting two years after that, so I knew only a soupçon of what Ed was working on back then. I enjoyed being apprised of his full involvement in the NIL area.

I seriously could have just talked to Chase all day—the guy is brilliant! UCLA is lucky to have gotten him because I know that several Ivy League schools were after him, as well.

But, with so many interesting sports-and-business-centric minds at the conference, I had more people to meet and greet, including a woman who’s on a committee for the 2028 LA Olympics. As I’m sure many of you know, I’m jumping out of my skin over that eventuality.

Okay, I tried to not mention the food, (because I was really into the plethora of info at the event, not eating,) but just to show you that I’m still me, I have to tell you that I, by accident, invented the most delish appetizer ever that day! It’s Caesar salad on…potato chips! They had run out of forks for a little bit, because, believe it or not, I was far from the first person on the buffet line this time! I was even close to being the last! So I had to use something with which to eat the salad, and all I could find was the chips. And I have been craving it ever since!

My little creation was just the icing on the LA Sports Innovation Conference cake. And now I look forward to it all again next year. I’ll just bring my own fork.