For those of you who don’t give a whit about tennis, I’m sorry to write about it for the third time this week. I definitely wasn’t planning to, either! But Wednesday was the absolutely craziest day I’ve ever seen in the sport, (that’s probably the same for everyone,) so I just had to weigh-in on it.

Let’s just say that many of the big guns dropped like flies. In the space of just a few hours!

I had to take a few hour break in my non-stop Wimbledon watching to go to the doctor yesterday because my hands have been numb. (Not the best thing for a writer, eh?) My diagnosis is dual—carpal tunnel syndrome (duh,) and…tennis elbow! I didn’t know you could get it just from watching! 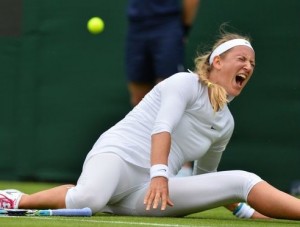 So, I feel extra bad for all the competitors who’ve had to withdraw due to injury. And that number is getting outrageous!

Everyone was floored on Monday when Raphael Nadal got beaten–badly, by the way–in the first round! And even though his previously bad knee did seem a bit gimpy after two and half sets, his opponent, Steve Darcis of Belgium, beat him fair and square. He just outplayed the great Rafa!

And then on Wednesday, Day 3 of the venerable tournament, all hell broke loose. It began as ESPN came on the air and announced that American’s best hope, John Isner, had just retired only three games into his second round match because he had come down wrong on his knee. And it went downhill from there.

In the space of the next few hours, three players plain withdrew, (because of injuries suffered in the previous round, most because they fell on the dangerous slippery grass,) six retired mid-match, and five big guns just plain got beat, including The Stranger I Love Most, Roger Federer. All in all, twelve seeded players ( including seven former number ones!,) got ousted, one way or another. (I’m too sleep-deprived to name them all, outside of Roger and Maria Sharapova, so if you really want to know who they are, I suggest researching the topic.)

Speaking of Roger, I’m just ill for him. I almost can’t bear the pain of him losing so soon in a tournament. I can’t be objective about it.

But the loss just proves once again just how classy the Federers are. Even in his stunning defeat, Roger tried to wait to leave the court with his victorious opponent, as all the competitors are supposed to do. And despite his son’s stunning defeat, his father even stood for the guy who had beaten him!!! I don’t believe it! (Conversely, years ago, when I told my little mother how rude Tim Allen was to me when the producers of his stupid show, Home Improvement, introduced us for the purpose of having me join the sitcom, she said, without skipping a beat, “He should be put back in jail!” You go, Maybelle!)

I know Roger will rise above this loss, but I won’t, though I’ll try to take a page out of Roger’s book, and be classy about this incredible loss. And, as Rafael always says, “this is not a tragedy, it’s sports.”  I hear ya, Rafa.

I was glad to hear from commentator Mary Jo Fernandez, whose husband is Roger’s manager, that he “handles losses better than anyone.”

Being superstitious, I thought the controversy over his orange-soled sneakers had done him in, but Roger poohed-poohed that theory.  (The rule at Wimbledon is all-white attire on the courts, but they let the players have a touch of colorful accents, such as the girls’ undershorts and trim on the guys’ shirts. But they made Roger ditch his orange-soled sneaks that he had worn in his easy sixty-eight minute win in Round One, and I was worried about that change. Rafa, who’s even more superstitious than I am, would have gone nuts if they did that to him.)

Also, Roger, who’s never been a fan of the new-ish challenge system, neglected to use it on a critical point that could have changed his sad outcome. His ball was called out when it was in, on a pivotal point for him. Such a shame that he didn’t think of challenging.

But Roger is the classiest person in the world. He should be the president of the world, if there was such a thing. At least the head of the UN! (I’m actually not kidding; he’s beloved worldwide, is used to negotiating on behalf of the players as the head of the Players Association, is brilliant, is even-tempered in the face of inanity, and has a foundation that helps third world countries!  Who better to lead the world???)

To end this on a positive note, I must give props to Aggie Radwanska for being one of the very few who’s making the effort to look good. Her mascara is fabulous, as are her eyelashes.