As I sat down to write this, to give my readers a heads-up of why I perhaps won’t be coming-up with new columns daily for the next fortnight, (although I’ll still try my best,) I realized something that’s kind-of sad to me. And that is: with Roger Federer getting older, and therefore less likely to win a Major again, (bite my tongue!,) and Serena Williams getting her groove back, (at least her tennis one; she’s recently proved how ignorant she is*) with not many challengers, I’m beginning to lose interest in tennis. Shame.

Ever since Roger’s been on the scene, and for a good many years before that, I’ve watched every single second of Wimbledon coverage, including on both channels recently. I even make my whole life schedule around this tournament including work, travel, and personal activities. My pals know what to expect during this time.

But I noticed the other day that I’ve accepted some fun invitations in the next two weeks, without too much panic about it. 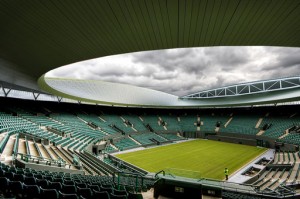 And yes, I realize that I can just record the matches and watch them later, so that my life doesn’t have to come to a standstill for sixteen days and nights, but that never works out, for one reason or other; I read the results somewhere, or I’ll be out to lunch and some jerk inevitably announces the results or news, or we wind-up at a place, be it a pal’s house or a party or an eatery, that has it on a TV, with everyone talking so I can’t concentrate on the tennis. And, as I already stated, I watch every second of coverage, including interviews, analysis, what have you, so I would have to stay up round the clock to catch-up before the next day begins. There are over a dozen hours of coverage daily, so I’d make myself even crazier than I am now.

So, in an effort to wean myself off my intense attachment to sports, (which you can read about here, if you missed it on Friday: www.itsnotaboutme.tv/news/2013/06/21/sportskarens-musings-nba-finals-2013,) I just may try to be cool and loose about Wimbledon. Except for Roger’s matches, which I hope are seven!

[*Serena’s new controversy: It’s so sickening that I can’t even write about it in-depth. But this is the crux, in case you missed it elsewhere: In a recent interview with Rolling Stone magazine, she made horrible comments about that poor high school girl who was raped by the football players in Steubenville, Ohio.

So, for any of you who still root for her, what’s wrong with you??? This woman has been a constant bad sport, has been abusive during her matches, even going so far as to threaten to shove a ball down a lineswoman’s throat!, she’s talked meanly about other players, she’s fabricated injuries to deflect attention away from her bad behavior, and even the girl she claims to have mentored, Sloane Stephens, has said that’s not true, and has distanced herself from Serena. And it’s time for her fans, and the commentators, to do the same! There are enough lovely ladies, who are good sports, to boot, to cheer for. Just pick any one of them, and let that nasty Williams woman hear some boos! I know she would were she competing in Ohio!!!]

I was so horrified by her comments about that poor rape victim, that I hadn’t noticed her major diss of Maria Sharapova! My bad. (You see how easy that is to own to up to something, Serena?!) I’m not going to dignify it by repeating it, but you can easily research this latest controversy. And Serena never even apologizes!!! She makes like that what’s she’s doing, but she really just puts it on someone else. In this case, she put the onus on the guy who wrote the Rolling Stone article because she hadn’t said the rotten comments to him, just with him there. So, she’s trying to make it seem like he was eavesdropping (which is what she actually said!,) rather than that he was with her for the purpose of writing the story, which means she knew he was privy to whatever she was saying in his presence. So, in addition to being one of the nastiest people in sports, she’s also downright stupid. Ugh.