With the Wimbledon tennis tournament ending on time yesterday, thanks to its three-years-old roof, what a pleasure to not get up at 4AM today! I don’t know how morning show personnel do it! But perhaps I shouldn’t get out of that new habit just yet because I’m having a garage sale this week-end, which means I have to be up really early again. [If you’re in the Los Angeles area, perhaps I’ll see you there. It’s at my friend’s house and is listed on Garage Rover and Craigslist.]

Before I write another word, though, I must congratulate Roger Federer, The Stranger I Love Most, on what I consider to be the most amazing win of his career! You go, boy.

I was going to once again rant about Serena Williams’ always-rude behavior and superior attitude, (after all, she gives me so much fodder, does she not?,) and the subsequent making excuses for her done by the American commentators, but I’m in such a great mood from Roger Federer’s incredible victory yesterday that I decided to make this column about just him. (And, I’m sure, me, of course!) 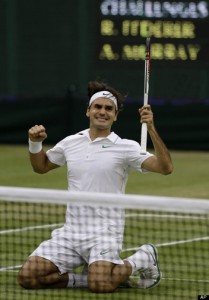 The Stranger I Love Most, Reger Federer, immediately after his seventh Wimbledon Championship victory. All photos from Wimbledon. com.

As much as I love Roger, I honestly didn’t think I would ever witness what I saw yesterday. Or this whole fortnight, for that matter. He hadn’t won a major tourney (what is referred to as just “Majors”) since the Australian Open in January 2010! With the dominance of first Rafa Nadal, and the emergence of Novak Djokovic in the past year, combined with Roger turning thirty-one next month, his chances of winning another one was looking rather bleak. Yes, he did have a record sixteen wins at Majors, but you could always tell he didn’t want to be put out to pasture just yet. I give him so much credit for still plugging away when his chances for future victories were really waning.

But, as I always remind him, (through the TV, of course) he’s Roger Federer! And my heart, if not my money, is always on him.

So, for this tournament, the first one I’ve ever seen where he had to call not only the trainer but the doctor(!) in his third-round match, he had to beat the #! player in the world, Djokovic, in the semis to even reach the Final! And that he did handily.

I seriously could not sleep at all the night before his Final against Britain’s favorite son, Andy Murray. I did on all the other nights of the tourney, going to bed between 7:30 and 10PM, and getting up at 4AM, most mornings without even the alarm, So I was exhausted the night before the Final, but I was just too wound-up with worry. I couldn’t wait for it to be 5AM, when the coverage started. I didn’t even want to have my traditional strawberries and cream while I watched Breakfast At Wimbledon! (But don’t worry—I managed to choke some down.)

And then it began. Badly, for Roger. Andy won the first set, after breaking Roger in the very first game! I thought I was going to throw-up. But then, Roger seemed to remember who he is, and it was all him from then on.

He did have an extra angel on his shoulder this time. My little mother loved him so much that I really believe she helped him along in the tournament. At least a little. Now, if only she loves me as much, maybe I’ll begin to win something! (Just kidding about that; seeing Roger win was all I was praying for, at the moment.)

Along with the win, Roger equaled a couple of Pete Sampras’ records by doing so, which, being what a big student of tennis history he is, I know meant a lot to him; they now both have a record seven Wimbledon singles titles, and have both been World #1 for the same record number of weeks. I believe that next week Roger will beat that one, too. And he extends his already-record number of Majors wins, now at seventeen. With Rafa Nadal at eleven, and being about five years younger than Roger, I’m happy for that little bit of extra cushion for Roger.

One last note about Roger’s win: I love that he didn’t celebrate exuberantly. He was aware that most of the crowd was devastated that he had just beaten their great British hope, Andy Murray, and seemed to temper his victory to not rub it in either Andy’s face or the crowd’s. He was even more respectful than he usually is, and I give him major (and Major) props for his always-kind behavior.

I have a few more thoughts on other aspects of the tournament, even though I’m having a tad of trouble putting them down on paper. (Or computer.) I’ve barely said a word to anyone for the past two weeks, so my sentence-constructing skills are in need of some honing right about now. 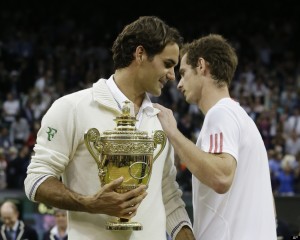 Anyway, Andy Murray did himself proud, first with his wonderful effort just to get to his first Wimbledon Final, and perhaps more importantly, his emotional post-match speech. He’s always so one-note in press events, so to see how much he really cared was eye-opening for most. [Note: for those of who don’t know, he’s the first British man to get to a Wimbledon Final since 1938! They haven’t had a native winner since 1936, so there’s an enormous amount of pressure on him in that country. The entire population there is pinning their hopes on him.] He played better than he ever has; to run up against seven-time Wimbledon champion Roger Federer was just too much for him to overcome. But he played very well in the Final, as well as in the whole tourney, obviously. 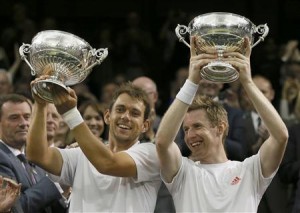 Speaking of the British hopes, there was another wonderful story for that country, that got over-shadowed by Murray’s journey. The doubles championship was won by the newbie team of Brit Jonathan Marray and Dane Frederik Nielsen. The latter’s win was the first for his country, and the former became the first Brit to win anything there, again since 1936. And they did it in five awesome sets against the number five team in the world. The victors came out of nowhere!

But even better than their play was seeing something I’ve never ever seen in tennis. Or any sport for that matter. In an important third set tiebreaker, Marray won a point, but had touched the net, which is a point-loser. But no one else noticed! Not the other team nor the chair umpire. Nor even the crowd. But Jonathan told on himself! Therefore, he gave the all-important point to his opponents. I swear, I’m crying thinking of that display of amazing sportsmanship. [Note: perhaps some others have done so, as well, but I’ve never seen it. I read somewhere that former player Mats Wilander had done so way back in the day, on match point to boot! That just shows how infrequent sportsman-like moves like that are, that his lives on in legend. I believe that Nadal and Djokovic also each did it once each, but I missed those, as well.]

Getting back to Federer, his win put me in such a good mood that my last two comments are positive ones for…Serena Williams, of all people! Even though she’s my most dis-liked athlete, perhaps of all-time, I do have to laud her for her recent weight-loss, which no one talked about even once in all the hours of ESPN’s coverage! After years with the same meat on her bones, I can’t imagine that losing that much weight could have been easy for a world-class athlete, who was already in great shape, muscle-wise. So, good for her on that. Now if she could just trim her negative personality the same amount, she’d be in good person shape, too!

And, lastly, I am jealous of Serena for one thing, though—her closeness with her siblings. That’s something I envy everyone for, more and more these days. I hope that everyone who has wonderful siblings cherishes those relationships. I can’t even begin to imagine what something like that would feel like. Shame.