Even though I just spent the last two weeks watching every single second of the Wimbledon television coverage, I don’t really have much to say on the topic. I had thought of taking notes as it went along, but, as I knew I wouldn’t be writing about it until after the whole tournament was over, I figured that most people wouldn’t want to read such old news today. So, for once, I have just a few comments on the proceedings. 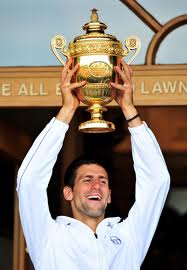 First of all, I’m thrilled that Novak Djokovic beat Raphael Nadal in the final to win his first Wimbledon Championship. With what he’s accomplished this year, losing only one match all year and that was to my beloved Roger Federer, he really did deserve this title. And he worked very hard for it over the past twelve months or so, from changing his entire diet to getting much more fit to working so hard on his serve. He seems like he’s been totally singular of purpose, (even though I know he has a cute dog he adores, which I know from fabulous experience takes up much of one’s time.) 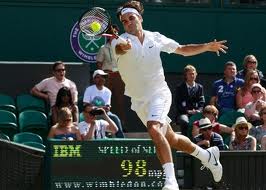 But none of the above are why I was rooting for him to win. Shamefully, I just didn’t want Rafa to get any closer to Roger’s record of sixteen wins in Majors. Rafa’s at ten now, and at twenty-five years of age, I’m really worried that he may have several more majors titles in him. But, if Novak can keep beating him, that will make Roger’s record safe. Novaks’s at three titles now, so he’d have further to go to catch Roger, which I just don’t envision happening, knock on wood.

A little different criteria for rooting at a sporting event, I know. But it worked. 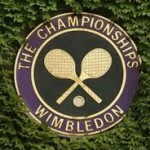 There are a few girls I root for on the ladies side: Kim Clijsters first and foremost, and then the sports’ two funny ladies, China’s Li Na and Italy’s Francesca Schiavone, who’ve each won one major title. All the women seem nice enough in interviews, and new blood for that gender’s wins is always fun.

The only females I root against are the Williams sisters, who are always full of themselves and never give their opponents any props. Mr. X gets disgusted when the commentators try to say nice things about them, probably because the network tells them they have to. So, we were both very pleased that the sisters both lost in the middle of the tourney and…on the same day! That was a shock.

What especially upset me about their Wimbledon appearances this year is that neither had played in quite awhile—Venus was out about five months, I believe, (I don’t have enough interest to research it that heavily) and Serena missed about eleven, first because of a mysterious foot injury and then possibly severe other health issues—yet many of the commentators still thought they were the ones to beat, which I feel devalues the hard work of all the other players on the tour.

[Note: I’ve always believed athletes when they say they have a health issue. But, Serena claims that she cut her foot in a restaurant in Germany a year ago, which resulted in her having to have two surgeries, but she can’t remember the name of the eatery!!! I’m not the only one suspicious about it, trust me. I think she just wanted an excuse to sit out the US Open last year because she knew that everyone would be talking about her horrible sportsmanship in the semi-final against Kim Clijsters the year before. This way, she had them feeling sorry for her about her “injury” instead. As one brave reporter pointed out in a press conference last week, why isn’t she suing the German restaurant for the stupendous loss of tournament money that their carelessness would have caused her? Think about it.] 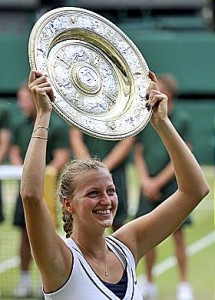 While this year’s Wimbledon seemed to lack some star power, with Clijsters out and a non-famous Champion on the female side, (Petra Kvitova from the Czech Republic) not to mention no drama like we witnessed last year with the Isner-Mahut marathon three-day match, it was still interesting to watch. Chris Evert joined the ESPN reporting team, which made me nervous for a couple of days when her rotten ex-husband, golfer Greg Norman, showed-up there with his new wife, (which, of course, no one else has mentioned,) and some cute new guys came along, like Bernard Tomic of Australia and Grigor Dimitrov of Bulgaria, and there were plenty of fabulous shots to keep us entertained. But best of all to me, who still has my little girl “princess” mentality, William and Kate showed-up in the Royal Box to watch their countryman, Andy Murray. Everyone involved, from spectators to players to commentators to viewers like I, seemed to get some extra pep in their step during that visit.

Fun times. And I got the best treat of all—my once-a-year, super-fattening Breakfast At Wimbledon strawberries and cream. It even made me forget the pain I was in over Roger’s premature exit. Almost.