Last week was the most exciting week of tennis I’ve ever seen in my life! And trust me, I’ve watched a lot of tennis!

The whole tournament was crazy: the stranger I love the most, Roger Federer, almost lost in the first round! He had a struggle again in the second, and Rafa Nadal has been doing even worse. Many seeds have fallen, including the two French Open finalists on the ladies side. 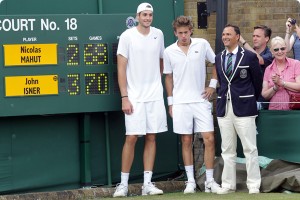 John Isner and Nicolas Mahut, with the referee, after the marathon matchat Wimbledon.

But the most amazing event was the John Isner-Nicolas Mahut marathon match, on Day 2. If you watched it, you’re probably sick of it by now, (as I almost am,) but just in case your were living your own life during the three-day, 138 game 5-set match, here’s a quick rundown of the situation. It ran from Tuesday though Thursday, and I seriously couldn’t even write about until now–my mind was fried from it! So, how do you think theirs were doing???

If we had seen a movie with this story, none of us would have believed it!!! We would have dismissed it as far-fetched and too unreal. It almost seemed like a segment of Twilight Zone, where two players were doomed to spend eternity in a tied match. (Please no one use that idea–it’s mine.)

The quick story is that these two guys, Isner from the US and Mahut from France, played four hard sets on Tuesday, until twilight. Rather than starting the fifth set in the near-dark, play was held-over to the next day. So, they re-convened on Wednesday, on the same Court 18. There is no tie-breaker in the fifth, as there are in the preceding four when the score gets to six games all, so the players have to continue to play games until one breaks the other, essentially. (If the guy who serves first gets broken, the other guy still has a chance to break back.)

Everyone expected this set to be like normal fifth sets, and go about an hour. But, when they reached 6-all, it became a test of wills, and serves, to see who would be broken. But guess what–these two guys are known for their big serves, especially the 6’9” Isner, so it’s hard to break them, even for each other. The commentators, Patrick McEnroe and Brad Gilbert, were joking that we could switch to other matches, and come back with the score 16-16, which would be incredible.

But no one expected the history-making to which we were treated. I really do believe we’ll never see anything like it again, not just in tennis, but in all of sports. It was like two gladiators. I’m really equally impressed with both guys, with an extra shout-out to Mahut, who had to play from behind the entire time. The set went on and on, and once again, was called due to darkness. They had to come back for yet a third day! (’m glad that Isner wound-up winning because he really wanted to play on, and got out-voted, sort-of. I don’t know why he wanted to continue, though, because he was playing on fumes at that point, and was definitely the less-fresh of the rivals. I think he said that he basically wasn’t even thinking by the end of the day.

So, after seven hours, they went home to mull over the day’s happenings, and gear-up for the next day. Of note is the fact that they were forced to take a bathroom break near darkness, and the referee never did the whole day!!! And, I loved seeing them go off to relieve themselves talking to each other, which never happens.

So they, and we, came back on Thursday for what we were hoping was the conclusion of the match, still scratching our heads. This day, thankfully, it took John Isner just an hour to get the victory. But it’s truly a shame that either player had to lose, especially after all of that. They were both so classy, and never complained about calls or the crowd or the heat or the light (or lack of it) or anything, the entire 11+ hours that the history-making match wore on. (I realized later that of course Nicolas Mahut is classy–he’s a Capricorn, just like a certain fabulous female journalist who crated this site!)

In an extra show of class, the powers-that-be asked the guys to stay on the court to receive some gifts. I’ve never seen anything like that either, especially for a Round One match!!! On a very outer court! I’m thrilled that they got recognized for this magnificent achievement, but I cannot imagine what it took for Mahut to stand out there, giving a little chat to the crowd and posing for pictures, when I’m sure all he wanted to do was get off the court and cry his guts out. It was a stunning show of sportsmanship, as were the entire three days, actually, from both men.

So, here are the stats for the match: three days, five sets, 183 games total for the match, with 138 of those occurring in that 5th set. Eleven hours and five minutes over the three days, with that one middle day alone going over seven hours! John Isner also has the record for most aces served, at 113, but Mahut is not far behind with 103. I think they broke every record there ever was! (If I have anything wrong, which I don’t think I do, please forgive me because I’m still bleary-eyed from the whole week’s worth of tennis.)

I can’t write more than this because I now have to go watch today’s proceedings on what is the most match-filled day of tennis all year.