So, we’re finally into the second week of the year’s final Major tennis tournament. The first week was mainly lots of fun, and a great distraction for me, to get me away from the problem with my hands. I kept thinking, “Better me than the athletes.” I know some of you think I’m crazy but, really.

Since I’m trying not to use my hands a lot, I didn’t make any notes this tourney. I figured I’d remember everything I wanted to tell you, as I more often than not do. But then Roger Federer went out in the fourth round last night, and almost all my interesting-yet-mainly-filled-with-levity thoughts got knocked right out of my head. I know that I have to get used to thirty-two-year-old Roger not being invincible anymore, but I’m having real trouble with that. I really do think he’ll win one more Major before he retires, because he’s brilliant and he’ll figure out how to re-group, but each of his losses feels like a knife in my gut. Remember–he’s The Stranger I Love Most.

Outside of that, though, I really have been enjoying watching these amazing athletes at work. I can’t believe that people can actually perform like this in the sweltering heat and humidity of New York City. I can’t even look at them standing there dripping with sweat, let alone experience that for myself. How do they do it?! 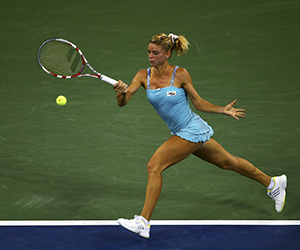 I’m putting two pictures of the outfit here, but they don’t even do the dress justice. I have a feeling she may have just even bought it at a store because it didn’t have the sponsor’s name on it, (other than the patch of a non-clothing sponsor,) and each day she wore a completely different outfit. I’m talking about the one she wore in Round Three when she defeated Caroline Wozniaki. 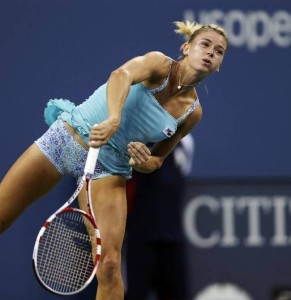 The dress was a pale robin’s egg blue, with two cute little pleats on the bottom, and the blue-and-lavender flowered boy shorts underwear matched the spaghetti straps of the dress. But there was an even better component to it; Camila walked onto the court, and warmed-up, in a thin, long-sleeved, stretchy top that was almost the same color as the dress but just a taste greener. The ensemble was truly mouthwatering.

And Camilla looked like Tinkerbell in it! She had her blonde hair back in a little ponytail, and happy greenish-yellow eyes. And she flitted all across the tennis court, such a tiny powerful thing.

I was a tad disappointed when the commentators didn’t even mention her attire. They often talk about Maria Sharopova’s dresses, or Bethanie-Mattek-Sands’ crazy outfits and high socks, and even sometimes mention Venus Williams’ clothing line. But here was finally a cute girl in an adorable outfit, and that they couldn’t mention. How annoying of them.

Okay, I have to end this slight tennis wrap-up now, not because I have nothing more to say about it, but because my voice dictation program that’s helping me write it is acting crazy! And it’s making it too hard to write anymore.

So the last thing I have to say on the topic is about Serena Williams. But it’s not about her tennis play, nor even about her phoniness when shaking hands with the opponent she just defeated, nor even about her horrible on-court attire, where we can see her white bra across the back, and also the tag from her dress! That is so strange.

No, it’s about the fact that she lists herself as 5’9” and one hundred fifty pounds! A hundred fifty pounds??? Something tells me it’s closer to one hundred eighty pounds! I’m sure they don’t weigh the girls before they walk out on court, so whatever poundage comes up in the on-screen stats is what the girls told them. It’s been cracking me up that Serena thinks that anyone is buying that she weighs a hundred fifty pounds. Not at this tournament, but at one or two others in the past couple of years, I have heard a brave commentator or two marvel at that number, also.

In-depth tennis report, eh? Mea Culpa, but, I swear, you really don’t need any more information than the above. These really were the first week highlights.